REVIEW: Along Came a Husband by Helen Brenna 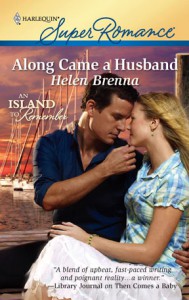 Sometimes the hardest reviews to write are the ones about books that are totally competent yet somehow failed to reach me as a reader and this is one of those reviews. The writing was competent.   There was a sense of urgency that kept the story moving.   The core of the book centered around reunited lovers with a dash of marriage in trouble – both tropes that I dearly love.   The characters had reasonable justifications for their actions but I guess, in the end, I found them fairly emotionally immature and not ready for a life together.

Missy Charms runs a gift shop on Mirabelle Island.   One stormy night she opens her door to find a man with a gunshot wound.   He turns out to be her supposedly dead husband, Jonas Abel.   Jonas and Missy met and married quickly and then repented nearly every day thereafter. Jonas, an FBI agent, spent most of his waking time working and spent very little time with Missy.   Missy felt abandoned and sought to fill the gap by working outside the home. Jonas had a deep seeded insecurity about providing for Missy and her job hunting fed that insecurity. At a very low point in her life, Missy needed Jonas and he was working and so she decided to leave him.

Jonas took the rejection hard and agreed to go deep undercover for the FBI, faking his death and disappearing for four years only to show up wounded at Missy’s home in Mirabelle. Together again, Jonas and Missy begin to question their separation and the fact that in the four year absence neither has found another to love.

The characters are thoughtfully developed. Their actions in keeping with the identities created for them, yet, the images that they both projected were those who were very childish. Jonas is surprised that Missy mourned him.   I found this rather incredible because even if you divorce it doesn’t mean you don’t care for that person anymore.   Jonas acted quite precipitously in faking his own death and completely removing himself from Missy’s life.

Unfortunately, his cover is blown and his life is in danger and he’s not sure who to trust. His superiors at the FBI might be dirty and Jonas flees to one place where he thinks no one can find him.

Part of Jonas’ insecurity was based on the fact that Missy lied to him when they met and kept a fairly significant fact of her past from him until only shortly before their marriage. There were real and serious issues that separated Jonas and Missy and I thought you did a great job of conveying those. I was less convinced that either Jonas or Missy had learned or grown from their mistakes. There really wasn’t any internal recognition of what went wrong in their marriage. Rather than being insightful, Missy and Jonas both had to be told by someone else what was wrong with their marriage. It seemed like a deux ex machina, in fact. I would have liked to see Missy or Jonas recognize in their time apart what had gone wrong with their marriage and how to fix it.

I guess in the end, I found Jonas and Missy quite juveline in their actions at the end of the book marked the beginning of their maturation rather than the end of it.   Jonas just started to awaken that perhaps it was his own self esteem issues and neanderthal mindset that contributed to Missy’s unhappiness. Missy began to realize that her selfishness had inflicted quite a bit of hurt on those around her. Yet even when faced with a few home truths, neither Jonas nor Missy really did anything with that knowledge. And by that I mean, that I didn’t feel like either of them learned anything until the end, nothing in the four tyears that separated them and I didn’t have confidence that this was a couple that would be able to hold it together during a crisis.

The ending wraps everything up neatly with all the previous issues swept aside as if both Jonas and Missy had suddenly become adults yet I never saw the process only the end result. I felt like you did a great job showing the flaws in the characters but I didn’t feel like they learned or grew. C+