For generations, the Kents have served proudly with the British Royal Navy. So when her younger brother refuses to report for duty, Sally Kent slips into a uniform and takes his place—at least until he comes to his senses. Boldly climbing aboard the Audacious, Sally is as able-bodied as any sailor there. But one man is making her feel tantalizingly aware of the full-bodied woman beneath her navy blues…

Dedicated to his ship, sworn to his duty—and distractingly gorgeous—Lieutenant David Colyear sees through Sally’s charade, and he’s furious. But he must admit she’s the best midshipman on board—and a woman who tempts him like no other. With his own secrets to hide and his career at stake, Col agrees to keep her on. But can the passion they hide survive the perils of a battle at sea? Soon, their love and devotion will be put to the test.

I’ve read and enjoyed your first three books: Georgian histories steeped in naval history. Your writing style is distinctive and seductive—you have a gift for dreamy description and passionately portrayed love scenes. I looked forward to losing myself in this book, Almost a Scandal, and was startled when, half-way through, I realized I wasn’t especially enchanted by your plot or your protagonists. 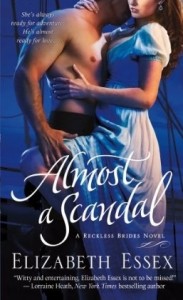 In Almost a Scandal, nineteen year old Sally Kent hates the dull land-locked life she has as a young, unmarried woman in Falmouth. All the men in her family—brothers, cousins, and her famous captain father—serve in the British Royal Navy under Admiral Nelson. The Kents, with the exception of the youngest son Richard, adore the sea and Sally is no exception. Thus, when Richard acts on his threat to run away from his sea-faring destiny—he wants to be a minister—and doesn’t show up to report for his assigned duty on His Majesty’s Ship Audacious, Sally dons his uniform and takes his place.

It wasn’t the first time Sally Kent had donned a worn, hand me-down uniform from one of her brothers’ sea chests, but it was the first time it had felt so completely, perfectly right. She had always been tall and spare, strong for a girl, but dressed in the uniform of His Majesty’s Royal Navy, she felt more than strong. She felt powerful.

(I had a hard time believing any woman could pull off such a deception. How would she pee, hide having periods, or constantly keep a bunch of randy sailors at bay? But, I did some research and it turns out there were several women who did indeed serve as men in Nelson’s Navy and managed to remain undetected for years. The most famous was a woman named Hannah Snell who served for over five years on the HMS Swallow from 1745-1750.)

At the dock in Portsmouth, Sally is picked up and rowed out to the Audacious by driven, darkly handsome First Lieutenant David St. Vincent Colyear. “Col” is no stranger to Sally. He’s a close friend of her older brothers and, the summer she was thirteen and he nineteen, he spent six weeks living with her family while he studied for his lieutenancy exams. Sally is panicked he’ll recognize her but he does not. She’s easily brought onboard and presented to Captain Hugh McAlden (the hero of your last book, The Danger of Desire, reviewed here by Janine) and the other men aboard the ship. Everyone accepts her as a young man—she’s pretending to be Richard’s age of fifteen—and Sally is elated to finally be a midshipman. She loves the work and is a gifted sailor—flying up the rigging, full of knowledge about the sea and ships, deftly offering leadership to her peers on ship.

But, from the moment Sally steps on board, Col is strongly drawn to, as he calls her, Kent. And when, soon after she joins the crew, he hears her singing an old ditty he’d heard her sing years ago, Col suddenly realizes Kent is Sally rather than Richard. He confronts her with the truth and she begs him to let her stay onboard. Astonishingly, he does. I say astonishingly because for him to do so requires him to both break the law and risk all he’s worked for. Why does he do this? In large part because he’s desired Sally since he met her—when she was thirteen (a little icky for me)—and he’s compelled now to keep her near him.

Their romance—for Sally desires Col as well—must be kept literally under wraps (Sally binds herself) in order to protect them both. The semi-villain of the piece, a bitter older midshipman named Gamage, senses the attraction between Col and Kent and threatens to have Col unmasked as one who “likes pretty soft boys.” This need for Kent and Col to hide their waxing want for one another makes for lots of lusting and not a lot of actual romance. Plus, there’s something off about the Kent/Sally persona. When they first kiss, finally alone on a dangerous mission in France, the way they refer to each other is flat-out odd.

It seemed the most natural thing in the world to kiss her again. To taste her again. To let his mouth drift down until her lips were there, beneath his. And she was soft and warm and yielding, and he kissed her slowly, breathing into her, filling her with his resolution.

He laid his finger across her lips—plush and taut, and sweet, like ripe fruit. “Col,” he murmured, as he lowered his head to her lips. “For God’s sake, Kent, call me Col when I’m kissing you.”

Their love affair doesn’t have enough context—there’s next to no information about Col and his past other than how strongly he remembers the weeks he spent in Falmouth—nor did it spark for me. Their passion for one another, in the brief times it’s allowed free rein, bewildered me. They seemed more suited as friends than libidinous lovers.

Far more viable than the courtship between Col and Kent is the story of Nelson’s war against Napoleon. You have a degree in Nautical Archeology and your knowledge of ships and naval warfare prevails in this book. I found it interesting and, at the same time, distracting. Rather like the pairing of Col and Kent, the melding of so much fact with so little romance didn’t work for me.

I realize this has been a rather negative review. And I’ve meant every word. But….

Compared to much of what’s published today in historical romance, your work, even this book, shines. I didn’t love this book—and I had every expectation of doing so given how much I’ve liked your earlier books—but I didn’t hate it either. Your prose is gorgeous and your depth of knowledge compelling. The world of the Audacious is meticulously and engrossingly presented and your secondary characters are terrific. Almost a Scandal is a book I found hard to grade. I’ve read it twice and have decided, with reservation, to give it a C+.

I do look forward to your next book.