REVIEW: All He Wants | All He Needs by C. C. Gibbs 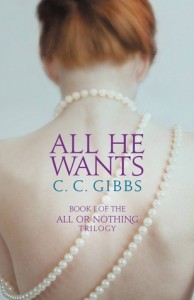 CC Gibbs is the pen name for Susan Johnson and I’m not revealing any secret. It’s posted on the website.  And because I love Susan Johnson books (like Pure Sin, Outlaw, the Braddock-Black series), I wanted to read these. Not only did I want to read this series but I wanted to love it.

Katherine Hart is hired by billionaire businessman Dominic Knight to trace twenty million dollars. At first she almost walks away from the job when she overhears Dominic cursing to someone on the phone. She doesn’t think she wants to work with someone like that but Dominic convinces her to stay on.

For the most part, books 1 and 2 present a classic Susan Johnson dynamic. Uber wealthy playboy hero sets eyes on a successful woman and has to have her.  He pursues her assiduously and she resists, knowing that he is bad for her and that she doesn’t want to become another notch on his bedpost. They fall into bed and know from the strength of their lust and orgasms that the other is different.

“And if you do as you’re told, I’ll screw the hell out of you because that’s what you want, isn’t it?” He could see the fury in her eyes, but he forced her to answer. “That’s what you came here for, right?”

Silence, incandescent with rage. He waited because she was flushed and trembling and he had what she wanted—a hard dick.

I mean, yes, she wants it but still. I wasn’t always comfortable. Additionally I found the sex to be rather tame. While the text tells us that he has an extensive repertoire, we actually only see the two of them engaged in a little oral and mostly the missionary position.  But beyond the eroticisim (or lack thereof) is the insane head hopping.

“So I’ve been told. Do you have family?” He preferred employees with a casual attachment to family. They were more likely to work the long hours demanded of them.

“You can’t ask that,” she flatly said.

His smile was mocking. “Are you going to sue me?”

His jaw clenched. “You can be a real bitch. Sue me for that too if you want. Now, could we stop playing games? I won’t ask you any personal questions, other than will you accept my job offer?” Leaning back in his chair, he unbuttoned his suit coat, shot his cuffs, waited for her reply.

She couldn’t help but notice his hard flat stomach under his white custom shirt. And the fact that he didn’t wear cuff links. She liked that. She’d always viewed cuff links as pretentious. Only an observation, the little voice inside her head pointed out innocently. No one’s trying to persuade you of anything.

Finally, for me, a long time reader, the entire plotline and conflict is really predictable. Dominic is very jealous of the way that Katherine gets so easily turned on and that she may have had sex before him, even though one part of him acknowledges that his behavior is unreasonable. Katherine, in turn, is peeved about Dominic’s licentiousness.  There is shopping, a run in with his mother, and monetary excesses that actual show Dominic’s wealth.

The first book, All He Wants, ends in a major cliffhanger and the second one, All He Needs, does as well but with the couple together.

If you like 50 Shades and don’t mind a domineering arsehole, this may be entertaining.  I’ll read Book 3 someday but it’s probably good I’ll have to wait months by then anything I didn’t like about these two books, I’ll have forgotten.  It’s hard to grade these two because I’m sure part of my problem is the long history I have with Susan Johnson books, some that I’ve read and re-read multiple times.  A new reader might not be perturbed by the repetitiveness but the head hopping? That’s kind of inexcusable. C