REVIEW: Against the Ropes by Sarah Castille

I knew the instant I read that the hero of your new book, Against the Ropes, was an MMA fighter that I’d be requesting the book. Makayla can’t being to imagine how she got roped into working the door at an underground fight club, especially given her aversion to blood, but here she is. In fact, Mac is here because her best friend, Allyson is hooking up with a fighter. Of course, she’s been ditched at the door so Allyson can go get the business from Jake, said MMA fighter. When a guy jumps the line at the club, Mac chases him into the club and ends up running directly into Torment. Torment is a star fighter, and a more beautiful man she’s never seen. Their attraction is immediate and incendiary. He talks Mac into staying to watch the fight, even though blood and violence literally make her sick. She forces him to promise that the fight will last less than five minutes and that no one will seriously get hurt (has she never *heard* of MMA?). Torment promises and sure enough, in less than five minutes, his opponent taps out and the fight is over. 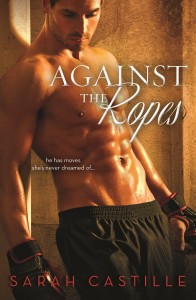 What Mac is unaware of is that Torment is actually millionaire playboy, Max Huntington. Mac is struggling desperately to make ends meet. She’s got a bill collector after her for college loans, and she’s working two jobs to try to pay her rent and pay her bills. So when Max offers her a job at the club as a medic (she has training as an EMT), she accepts, despite her aversion to violence. When Max shows up at her job, she’s shocked and delighted. Soon, the two are seeing each other, and are beginning a sexual relationship. But Max scares her. He’s extremely dominant, very bossy and overprotective. And Mac always seems to be putting herself into dangerous situations. She goes to seedy clubs with her best friend. She has numerous men who would like to get in her pants (she, of course, is unaware of her total desirability), and she’s not very worldly. She’s had a horrible past, full of abuse and parental alcoholism, so she’s very slow to trust. All of this brings out Max’s protective instincts. He wants Mac safe and he’ll go to any length to protect her. But will her ever be able to make her believe that even though he is capable of violent things, he’d never hurt her? Will Makayla ever be able to take a chance on a man who seems almost too good to be true?

There were a lot of things to like about this book, and some that I really didn’t like much, or didn’t make sense to me. The book is told in the first person, and I liked Makayla. I thought she was a a relatively reliable narrator, although she read *very* young. She’s naive, innocent and wishy-washy. But she’s also brave,  and smart and friendly. And I liked that she stood up to Max on a routine basis.

I wanted to like Max more. He’s a lot of things that I generally like in a romance hero. He’s extremely alpha, protective and a caregiver. But he goes about it in ways that would have had me kicking him to the curb. Also, it’s clear that the intent was for there to be a D/s element to the couple’s relationship, but he went about initiating Makayla, who is clearly inexperienced, in a really clumsy way. He just assumes that it will be totally fine with her, which, given her past (that he is unaware of), was not a given. At one point, he “punishes” her by leaving her tied to his motorcycle for five minutes after bringing her to the brink of orgasm. He justifies it by telling her that she’s wet (um, wouldn’t she have been if she’d enjoyed what they were doing up to that point? It doesn’t just go away). She’s outraged and angry, but of course, lets the interaction go on. Over and over, he clumsily starts these interactions, which trigger Mac’s memories of her past. The issue is not helped by the fact that Makayla doesn’t tell Max about her past, and tells him it’s “nothing” when he asks about what happened.

It also took me a long time to understand why Makayla would have chosen to be an EMT. She couldn’t stand the sight of blood or violence, which it would seem come with the territory. It is explained in the end, but it really distracted me while the story was ongoing. I think there’s a ton of series-bait in the story as well, but it wasn’t too distracting. The sex scenes were pretty well written, particularly after Makayla and Max finally talked and got on the same page. It’s a book that gobbled up in giant bites, so I know I liked it, but it’s not without its issues. I’d definitely read more from you though, and give Against the Ropes a qualified recommendation. Final grade: C+.