REVIEW: After the End by Bonnie Dee

JaneC+ Reviewspost-apocalyptic / zombiesComments Off on REVIEW: After the End by Bonnie Dee 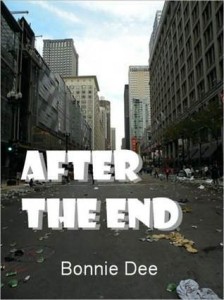 This was a book recommended to me after I expressed interest in post apocalyptic books, an interest stoked by the writing of Kylie Scott. “After the End” is a more plot driven, cinematic book and because of that, not as engaging. However, for those who like fast paced action with some human interest elements and a light romance, this book would likely be a great escape.

“After the End” begins with a set scene on a subway train and follows a group of survivors as they try to make their way to safety which is either a helicopter ride to the interior of the nation or the pier. While much of the world building is well done, such as how the zombie apocalypse began and maybe how it can be fixed, the opening scene is problematic.

When the train is stopped suddenly and apparently under attack, the main character, Ari Brenner, a reluctant leader cast as the person of authority because he is still wearing his army uniform, immediately leads the group underground. How a zombie apocalypse leads to a sudden attack on the subway doesn’t entirely make sense to me, even if the mutation is swift. It would have to be almost immediate for people on the subway to not realize that there is danger until some point on their train ride home.

From the subway attack and forward, the story focuses primarily on a number of action scenes as the group seeks to survive while making difficult decisions about who gets to stay, who can join, and whom to trust. The weak elements of the group such as a mother and her baby provide an interesting dilemma.

While there is a romance between Ari and Lila Tesk, a psychology student, the pathos of the other characters often supercede the romance. A young brother and his sister start out as squabbling siblings and then transforms as the two are placed in increasing amounts of peril. We see the young boy make difficult and painful decisions.

But this is an action focused book that spends only a little time on the human interaction. Toward the end, the action scenes began to be repetitive and held little interest for me. The ending felt rather unsatisfactory to me and I was further disappointed when the sequel to the book features another survivor group in another area. I wanted to know more about this group of survivors, particularly given the rather open ended finale. C+

→ Jane
Previous article: Will eBook Adoption Flatten out at 30% of the Market
Next Post: Monday News: Amazon v. Indies, round 500; U of Mississippi cures baby of HIV; Trusted friend best source of book recommendations