REVIEW: A Witch’s Handbook of Kisses and Curses by Molly Harper

Before this book, I would have said that a paranormal romance cozy would have been not my thing. After all part of the point of injecting magic and supernatural creatures into a romance is about heightening the suspense and excitement right? Though the vampires in this book have about as much mystique as grandparents, what this book demonstrates is that humans are the most tricky and dangerous creatures of all. 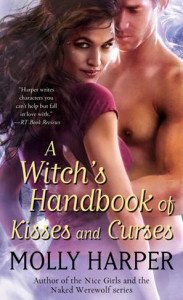 Nola Leary is the latest in a long line of Irish witches. Her beloved Nana McFee has passed, leaving her the rather unfortunate task of seeking four objects to that are not only crucial to the family’s magical heritage, but necessary to prevent a witch clan war. This requires her to fly to the small Southern town of Half-Moon Hollow, Kentucky where her grandfather lived before he died.

This book is less romance-focused and more about a woman’s self-discovery / supernatural coming of age, though there is a romance. Despite the fact that Nola has a fiancé back in Ireland (who she lied to before coming to America because he’s not into her family’s magic crap), she definitely still admires the hot body of new next door neighbor Jed Trudeau. As Jed and Nola get to know each other a little better, the friendly flirtation eventually morphs into something else. Their relationship development was cute, though perhaps a bit fast and superficial. As a result when Nola discovers Jed’s real intentions towards her in Half-Moon Hollow, the emotional impact was not as strong as I think it was meant to be.

I love books about the exploration of different cultures, especially American culture from an outsider’s point of view, and finding that here was an unexpected bonus. Though Nola is technically an American having spent her early childhood in Boston, the culture of the semi-rural South is something else altogether for her. From laughing at the name “Jed,” to being dumbfounded at the size of American cars, Nola’s newcomer reaction feels quite real. The matter-of-fact way she treats the existence of vampires (apparently, they revealed their existence several years ago while one of them sued for appropriate accommodations under the Americans with Disability Act) also feels real. But it was a bit odd to me, in a book set in the rural South, that featured interactions with the “Other,” there were virtually no black people at all. This is an “American South” of Bubbas and one-taxi towns, but no people of color apparently.

Yet, the way in which vampire Jane Jameson, who now owns her grandfather’s bookshop and where the artifacts were most likely hidden, cozies up to Nola and offers her friendship and assistance seemed a little too pat for me. Although it does take a little time in the novel, the way in which Nola just gains friends and becomes an extended member of the Half-Moon Hollow family seemed a little Mary Sue-ish. For example, not only do we discover that Nola’s vampire landlord was not just best buddies with her grandfather, but is actually Nola’s great-great-great-several greats grandfather, who is eager to get to know his newest granddaughter.

This is not to say that familial relations are always so cozy. Nola’s dead grandfather didn’t even know he had a daughter, let alone a granddaughter. Apparently Nana McFee didn’t want to trap her grandfather into staying, and so she never told him. Later Nola muses that her own estranged relationship with her mother may have been the result of growing up without a father, and so ends up having mixed feelings about the legacy of much beloved Nana. These sadder notes actually end up balancing a story that would have been too cute and sweet otherwise.

For a story that is about magic, it is rather curious that very little (if any) of the supernatural or magical end up being part of her quest for these magical objects.

[spoiler]She never fights any great beast or monster, and in fact, she comes across some of them by random chance. As a result, the search itself is not really all that gripping.[/spoiler]

It’s a rather charming book, kind of ¼ Charlaine Harris and ¾ Sherryl Woods. It’s definitely something newer in the paranormal genre. Personally, I’ve never been much of a big fan of cozies, but this supernatural cozy was alright.  C+/B-

→ Amy
Previous article: Taken By Him and Bound By Him by Red Garnier
Next Post: Daily Deals: Tough female investigator; Tortured protagonists; and an alpha bad boy collection