REVIEW: A Twist in Time by Susan Squires 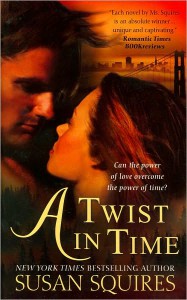 Time travel romances aren’t for everyone. It often takes almost too huge of a leap of faith for some readers, in part, I think because it is partly grounded on reality. There are a lot of conveniences that a reader has to look past in order to enjoy the story. That said, I enjoy a fish out of water tale and this delivered in that respect.

Lucy Rossano is a rare book dealer who came into the possession of a book by Leonardo Da Vinci. She shows it to a friend of hers, Dr. Brad Steadman, who freaks out. A sketch inside the book reveals a machine that Steadman tells Lucy exists. Not only does it exist, but the book shows how to work the device which Lucy understands to be a time machine.

Dr. Steadman and a military man, Colonel Casey, agree that no one can be told of Lucy’s book or the machine itself but that someone must test it. Steadman and Casey both turn to Lucy who agrees. Somehow, she feels as if this is her destiny. But time machines are tricky things and somehow Lucy ends up back in the present time, only with a wounded Icelander on her hands, one Galen Valgarssen who lives in 912.

In order to have any enjoyment with this book, one must swallow the conveniences, the contrivances, and the kitschy nature of the villains. Galen’s fish of water or Nord out of Iceland act is entertaining. He is used to being the strong one, the defender; yet in this strange world he “had no value. He did not speak as these people did. No one wore swords, not even Jake, who owned one, so Galen’s skill with one would not be valued.
…

Was this the way of a Danir warrior?

She obviously despised him for his weakness. Her tone was clearly ordering. She had actually threatened him with starvation if he didn’t take her hellish tablets.”

I really enjoyed the interaction with Lucy and Galen. Galen wanted to prove his worth to Lucy and one area that he was convinced he could show her he was superior was with his body. Lucy was attracted to Galen but also cognizant of her need to return him to his time, while also trying to hide his presence from outsiders.

I thought the time spent with Brad and Casey was less interesting, in part, because these two were almost comical in their evilness. Casey was already evil and power hungry and Lucy running off with some man made her enemy number one for Brad.

I always wonder at people’s quick acceptance of something so unfathomable but I guess the moral of the story is that love conquers all. This is a lighter book than other Squires’ novels such as Danegeld, relying more of the humorous aspects of the unfamiliar to drive the action. Because of all the early conveniences, it was hard for me to drum up any kind of suspenseful feeling toward the story. All would end well, it was just a matter of how.

Lucy and Galen were able to converse with one another in Latin (the language of the Christ Cult) and I felt like you had put forth great effort in making the language barrier very authentic although toward the middle, Galen picks up English fairly quickly.

If a reader doesn’t like time travel romances, this is not a book she would enjoy. Further, many of the issues of time travel are not addressed here such as what happens if you change one thing in the past such as removing Galen from 912 and placing him in the present time; whether there are parallel dimensions or whether time travel is just movement along one continuous space/time continuum. But as a character sketch, it’s entertaining and romantic. C+ because I ended the book curious about the others who will be affected by the machine and the book.

This is a mass market published by St. Martin’s Press, a division of Macmillan. Macmillan is one of the Apple five. The digital price of the book matches the mass market price.

→ Jane
Previous article: REVIEW: A Rather Charming Invitation by C. A. Belmond
Next Post: REVIEW: Instant Temptation by Jill Shalvis