REVIEW: A Night of No Return by Sarah Morgan

The length of the book was felt keenly in this story. While the story has a believable conflict and is well written, the truncated ending left me feeling unsatisfied. 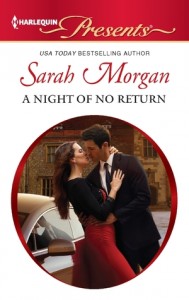 Lucas Jackson is a wealthy man who has no interest in any personal entanglements. This is due to some dark secret that he alludes to frequently in the beginning of the book but is not fully revealed until the latter half of the story. This secret despair drives him to drink himself senseless on the anniversary of his loss. He drives out to Chigworth Castle, a property he has purchased to turn into a luxury hotel, where he plans to undertake his lonely venture

His efficient secretary, Emma, drives from London to Chigworth Castle to deliver a folder of information he will need to take to Zubran, an oil rich state in the Persian Gulf. He will be leaving via helicopter directly from the castle.

Emma declares she has no feelings for Lucas but is easily seduced that night. The next morning, Lucas turns his cold eye on her only to have the cold shoulder being returned. I would have loved it if Emma was indeed indifferent to Lucas as she professed, but of course she is not. She had fallen in love with him over the course of working for him despite him being a sort of lothario with impossible demands. I wasn’t quite sure what she saw in him other than his physical attractiveness given that he seemed fairly insensitive to her feelings, slept around with air headed socialites and models, and was a workaholic. Nonetheless, Emma’s desires are driven to the surface when confronted with surly, somewhat drunk, Lucas.

There is a conflict between Emma and her sister who sacrificed her career to provide a home for Emma’s brother. Emma lives in a tiny apartment in the city during the week, working long hours to provide for her sister and her brother. Her sister provides the day to day care necessary and then hands off the care to Emma when she comes home on the weekends. I felt the sister’s animosity and disappointment toward Emma was unfairly presented – it could have been far more nuanced – but this way Emma seems the selfless martyr.

However, it was the way in which Lucas’ emotional change was brought about was too quick to be believable and too manipulative. Really, that was all that it took? Maybe I missed some progression. Maybe I was supposed to add up his softening toward Emma with this other moment to equal true emotional growth but I didn’t buy it and I came away feeling unsatisfied.