I was sent this book by Berkley with a note that they know I like unusual historical settings. The book takes place in Italy in 1890. The set up is a little strained. Three male friends – the impoverished Duke of Wallingford, his brother, of Lord Roland Penhallow, and their friend Phineas Fitzwilliam Burke decide to lease a Tuscan fortress advertised in the newspaper. 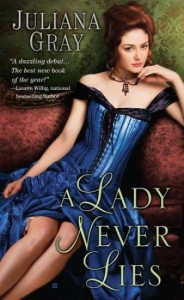 Burke actually leases it with his “sordid millions” made from his patents and inventions and bullies his two friends into rusticating with him because he is worried about their excessive drinking and whoring. Burke plans to compete in an auto engine race against Delmonico in Rome and thinks that the retreat will be the perfect place to perfect his engine.

Also going to Florence is Alexandra, Dowager Marchioness of Morley; her sister, Abigail; and her cousin, Lilibet, Lady Somerton. Alexandra holds an exalted position in society but won’t for much longer if word of her straightened circumstances leak out. Her husband’s nephew invested her jointure into a factory designed to produce a steam engine for an automotive but the factory has been thus far unsuccessful and the bank is knocking at the door. The two groups of people end up being housed in the same residence due to a rental mixup. Given that the estate is quite large, the two agree that they will both remain. And because no group of men and women in a romance book can stay in the same house without some kind of wager, the two groups bet on who will stay the longest with the winner posting a notice in the Times as to which sex was superior.

The main romance centers around Alexandra and Finn. There are class issues given Alexandra’s nobility and Finn’s trade status not to mention that he is a bastard. There are personality issues. Alexandra is a known society maven and Finn is a scientist and inventor. Alex is intimidated by Finn’s knowledge and Finn is intimidated by Alex’s social ease. She always seems to know the right thing to say, the right riposte.

This is a book about which I have much conflict. I loved the period feel of the book and the location (Italy) as well as the automative details. The race through the streets at the end had a marvelous turn of the century feel. Alex and Finn are a great pair and Alex herself is a very vibrant character. Finn is ginger haired, green eyed, freckled and stands 6 and a half feet in his stockings. Alex refers to him privately as an overgrown leprechaun upon meeting him. Alex’s search for her own independence in this period was also interesting. Finn’s wealth, not his parentage, is troublesome to her. She has felt like a commodity and now, having stupidly trusted another man, wonders whether she can marry one whose wealth is so much greater than her own:

“I can’t,” Alexandra said. She stared at that distant shock of ginger hair, fiery red-gold in the torchlight, and her voice, when it emerged, choked painfully at the base of her throat. “I won’t. Marriage is a bargain, a contract. You know that as well as I do. I won’t take something so beautiful as this and turn it into something sordid. I won’t ruin it.”

“Is it because of his money?”

Alexandra picked up the macaroon and placed it in her mouth, where it melted sweetly on her tongue, coating her mouth with the rich taste of almond. “It spoils everything, money.”

“Because if you do, the money won’t matter.”

“But it will,” Alexandra whispered. “Money always does. What if…what if it is the money? And if I marry him, I’ll never know. I’ll be comfortable and luxurious, and never know if it was just the money, after all. If I wasn’t just deceiving myself about the rest of it.” Oh God, what was she saying? The wine, the stupid wine, making the thoughts tumble unchecked from her mouth.

What I didn’t like was the faux battle of the sexes, the convenient set up, and, my least favorite element, the use of ghosts or spirits to bring about crisis or to solve them. One other thing that some readers may find off-putting was that Alex was spying on Finn’s inventions. I didn’t find it offensive because she simply didn’t know enough to be able to use any information to help the factory in which she had invested all her money but it was an underhanded and sneaky thing to do.  The setting, the inventions, and likeability of the characters made for a better than average read. C+

→ Jane
Previous article: First Page: The Red Dress
Next Post: Daily Deals: When We Touch (Whiskey Creek) by Brenda Novak and other romances