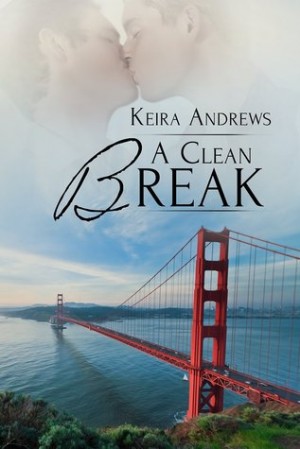 Examining oneself in a mirror has become a huge cliche in fiction, but for the character of David Lantz, it’s more than a convenient way of describing what he looks like: it’s his first opportunity to see himself naked.

To be admiring his own body was sinfully vain, and strictly against the Amish rules, of course. But there was no one to stop or shame him here. Not about mirrors or pride or anything.

Most importantly, there’s no one to stop him from loving Isaac. A Clean Break picks up where A Forbidden Rumspringa left off, with the Amish lovers newly arrived in San Francisco and finally free to be together. This time the story is told from the point of view of David, rather than Isaac. In Zebulon, Minnesota, David was not only the older of the pair — 21 to Isaac’s 18 — but the one who had some experience with the outside, “English” world. Yet in the strange new city, it’s Isaac who adapts the most readily, finding an alternative school where he can catch up with his limited education, easily learning to use technology, and making new friends. David, torn with guilt over having deserted his needy family, and finding the new world overwhelmingly scary and complicated, starts to feel distant from Isaac, and is increasingly drawn to English methods of self-soothing.

And that’s kind of a good thing too, because otherwise there would be almost no story at all. Everything else goes great for this pair: Isaac’s brother Aaron, who ran away some years previously, fortuitously lives in San Francisco and has no hangups about homosexuality, and has fortuitously managed to acquire a home with plenty of space for siblings that might run away to him. His wife is fortuitously thrilled to have them as long-term guests who need financial support. Everywhere they turn, people are welcoming and friendly; one person is nasty one time, and then sorry for it.

It’s not that the book was boring. The conflicted feelings and vulnerability the two young men feel, as well as their tender love for each other, makes them very sympathetic; their transition is interesting, especially the ways in which they find their religious practices eroding, and their confusion around how much they should try to hold on to. And the ways the outside world puts pressure on their relationship are thoughtfully drawn.

One of the other guys–Steve?–spoke up. “Aww. That’s so sweet. I remember my high school bf. His name was Craig. He had the voice of an angel and the ass of a figure skater. We thought we’d be together forever, of course.”

Everyone laughed but David and Isaac. David wasn’t sure why it was so funny. He knew the English often didn’t get married as young as the Amish did, but surely some young couples stayed together?

I was always absorbed in the story (although I confess to skimming over the long, graphic sex scenes, which are just not my cuppa.) But there is so much positivity in their new lives, it almost feels as unrelenting as the negativity in their old ones. Even Aaron’s Seventh-day Adventist in-laws are thoroughly welcoming, albeit a bit clueless. (There’s a lot of diversity amongst the secondary characters; Aaron’s wife is Filipino.)

And it’s not exactly that I wanted bad things to happen to this sweet couple; I’m rooting for them all the way. But I felt there was considerable foreshadowing for things to get very scary, and when that never happened, the book seemed to be pulling its punches. When a bad thing does happen, it comes out of nowhere to create a bit of a cliffhanger ending, though thankfully not the kind that makes me want to claw my own face off in frustration.

I enjoyed this, and definitely want to read the next book, but I’m hoping for a better balance of tension next time. C+