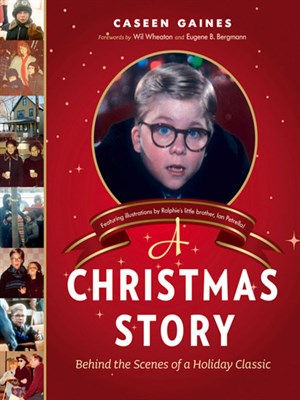 The definitive guide to everything fans want to know about A Christmas Story shares the inside story behind the film’s production, release, and unlikely ascent to the top of popular culture. From Jean Shepherd’s original radio broadcasts to Bob Clark’s 1983 sleeper hit film and beyond, A Christmas Story has become a beloved Yuletide tradition over the last three decades. In conjunction with the 30th anniversary of its theatrical release, this is the untold story of the making of the film, and what happened afterwards. Ralphie Parker’s quest for a Red Ryder air rifle didn’t end with the movie’s release; the tale inspired massive VHS sales, a Broadway production, and a mountain of merchandise. Complete with rare and previously unreleased photographs, now fans of the movie and film buffs alike can learn all they didn’t know about the timeless classic.

This is an unabashed little love letter to this (now) classic Christmas film. Released in 1983, it took cable TV to propel it into holiday traditions – thanks Ted Turner. But now its fans are legion and very devoted.

Based on a conglomeration of short stories by Jean Shepherd who is also the voice over narrator of the film, it was made in part thanks to the phenomenal success of Porky’s of all movies. The gross from that one allowed director Bob Clark to finally get a major studio interested – but not that much – in forking over the miniscule budget with which it was made. With a cast of mainly child actors along with – for me – the biggest name of Darren McGavin (loved the Kolchak series) as “The Old Man,” it was made in six weeks in (mainly) Canada and Cleveland, OH.

Lack of promotion by the studio sank it soon after release but thanks to cable TV and non-stop 24 hour marathon showings it began to grow legs leading to merchandizing, the conversion of the house in Cleveland – where the outside scenes of the Parker’s home sweet home were shot – into a museum and gift shop (who knew that many people wanted to buy leg lamps?), action figures of the characters and a Monopoly game – of all things.

Actors (mainly the then children or secondary role adults) contribute their memories of the film and their involvement in the movie over the years. It definitely suffers from the fact that by the time it was written, the director Bob Clark, Jean Shepherd and McGavin had all passed away and that Melinda Dillon (Mrs. Parker) and Peter Billingsley (Ralphie) don’t do interviews about the film.

Die hard fans – one of whom was responsible for the museum – talk about how much the film has meant to them. There is info about the two sequels – anyone ever seen them? – the theater play adaptation and “A Christmas Story – The Musical.” Plus one (seemingly endless) chapter on likeness rights and lawsuits over them. I’m thinking most of the stuff about the other movies, play and musical are mainly for the devotees as I found my attention drifting. The book is packed with pictures of both then and now and is a nice way to spend a few hours before pulling out the DVD and sinking into the story during a simpler time of Ralphie’s longing for his Red Ryder BB gun. C+