Not So Lightning Harlequin Reviews: The Lori Borrill Edition 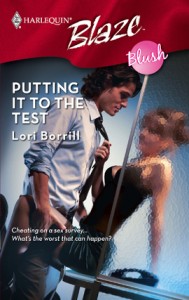 Upon the recommendation of others, including, Blog Happy, I picked up the November Harlequin release of Lori Borill titled Unleashed. I enjoyed it so much that I went and downloaded two other Harlequin ebooks by Borill, Private Confessions and Putting It to the Test. When I sat down to pen the “lightning” reviews, they ended up being much longer than a paragraph but I felt that given that I don’t have space constraints on the blog, I’d throw up the entire thing rather than revise to one paragraph each.

For those who don’t want to read the tome below, I’ll sum up. Private Confessions and Putting It to the Test had awkward, credulity straining setups that the writing managed to overcome but it’s Unleashed that has put Borrill on the autobuy list for me.

Putting It to the Test

Carly Abrams is a web designer who, until the arrival of hot shot programmer, Matt Jacobs, was her company’s favorite daughter. Since Matt was hired, though, all the choice projects have gone to him. The latest project is one for a online dating company and in order to win a spot on the project team, all the competing members have to fill out the Singles Inc survey which includes a lot of personal questions about their sex life. Word gets out that Matt has already been chosen for the team and the boss is looking to pair a woman up with him. Carly gets Matt’s answers and answers the survey to ensure that she’s the best "match" and thus placed on the project as well. The upshot of this is that Matt and Carly are deemed to be a perfect match by the Singles Inc survey.

This "sex survey" thing that leads to Matt looking at Carly in a whole new light is one of the frustrations I had with early Blaze’s wherein seemingly ludicrous set ups are created to sexualize the content. I just could not imagine a workplace setting in which people would have to answer sexually explicit questions in order to get an advancement. It seemed like a lawsuit waiting to happen.

The saving grace of this story is that if you strip away the survey nonsense, Matt and Carly are very likeable characters. For all his outside veneer of success, Matt feels like a screwup. He had a chance to be a major league baseball player but never made it out of AA because he screwed around too much. He’s always had a thing for Carly (but never viewed her as someone who would be interested in a sexual relationship) but whenever he talks to her, he manages to put his foot in his mouth. Carly is trying to break out of her good girl mode and she feels like a fraud. She wants to live a more exciting life, but it doesn’t feel comfortable to her.

I liked that through the team project, we learned how Carly focused on the human behavioral aspect and Matt on the showiness of the site. In essence, we learned why Carly and Matt would make a good team, not just at work, but at home as well.

In the midst of this, both Carly and Matt vie for a promotion, struggle with their feelings for each other, and an office romance that could ruin one or both their careers. There was a certain artifice to the set up along with a late breaking pseudo misunderstanding that detracted from the overall enjoyment of the book. C 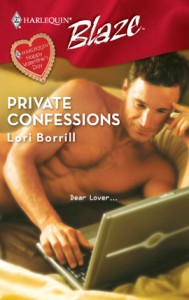 Trisha Bain fell for her boss, Logan Moore, when she joined the Moore Agency two years ago. He hasn’t given her the time of day but it doesn’t stop her from fantasizing about him. Because she’s so enamored with him, she hasn’t been able to look at another man and instead turns to a computer dating site wherein she engages in IM and email sex with a stranger with Logan Moore being the face of that online stranger.

Again, the problem here is the setup. Trisha Bain is so ruined for other men but she can engage in online IM sex?   Maybe it’s her devotion to the online virtual reality that keeps her from meeting men and not her devotion to Logan.

Of course, because this is a romance, Logan Moore is the stranger on the other side of the screen. Logan has a somewhat plausible explanation for why a super sexy, super rich guy would be spending his weekend evenings alone in front of his computer, typing out dirty words.

Logan was deeply hurt when his wife left him and took half of his ad agency with her. She’s set herself up as a competitor and it was clear to him that she was only in the relationship for herself. As a result Logan is a woman hater, or at least one that distrusts women quite a bit.   There was a certain HP quality to this book in the wind up of the emotional conflict.

It’s really a credit to the writing that the ridiculous setups don’t stop me from reading the books. Trisha Bain might not know that her internet lover is her boss, but once she does and that she still conceals it means TRUST issues.

Fortunately, Logan isn’t the standard asshole. He’s been hurt before and while he’s a magnetic man with a lot of success, he isn’t always sure of himself. Trisha Bain isn’t a doormat, either. She’s confident in what she does in her profession, she’s just not quite sure how to make the relationship she wants with Logan from virtual into reality.

Playing off Logan and Trisha is the secondary romance which starts off rosy and the picture of relationship health, only to meet significant impediments which, I felt, was a play on how all relationships have a certain imaginary feel to them when there is no conflict. In other words, love can be a virtual reality, easy and without risk, when you aren’t confronted with, or refuse to confront, real world issues.

I liked that the story brought in the ex wife and while she was painted with an atavistic brush, Trisha didn’t cow to her. Instead, she recognized the ex-wife’s weakness and exploited it. C+

Which brings us to Unleashed. 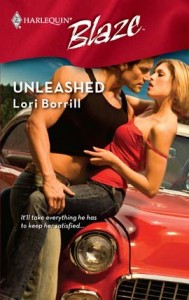 Unleashed had all of the positive elements I had enjoyed in the previous two books and none of the bad. From the very beginning, I was caught off guard. The book opens with Rick Marshall role playing the sexy sheriff for a hot blonde who picked him up at the bar. Rick "normally wasn’t such an easy mark, but between a crap day on the force and a couple of condoms growing dust in his wallet, he decided not to play his usual game of not-interested. – Tonight was a night to do something he hadn’t done in a long, long time. Have some fun."

Jessica Beane is far away from her hometown in Texas. She’s got a complicated past and she’s trying to start anew in San Francisco. One of her handcrafted "Beane" bags made it into People magazine and now she’s got orders coming out of her ears. She’s on the cusp of really doing something with her life when it all seems to go to hell in a handbasket.

Rick is in the midst of an investigation murder investigation and checked out a laptop that had been confiscated from the suspect. He surreptitiously sent the laptop to a hacker friend of his (fruit of the tainted treeeeee*) to see whether there were any details on the computer that would put the rich software developer in prison. The problem is that Jessica Beane’s past has come and stolen Rick’s car and the precious evidence inside it.

Rick thinks that Jessie stole his car. Jessie says no, it’s her ex husband a former felon who apparently is out of jail and now want to rekindle their dead, broken, stomped on marriage. Together Rick and Jessie must chase down Rick’s car which means a very unpleasant trip down memory lane for Jessie. On the way we find out that Rick’s own past isn’t pleasant. His wife was killed almost three years ago and he hasn’t quite gotten over it.

Jessie is an adorable heroine. She’s had a tough marriage and spent much of it trying to be the best wife ever only to find out it her husband was a crook. She’s dated a number of men who haven’t really been the best for her, conflating love and sex. She admits to not being very strong but is trying to stand up for herself. Plus, she’s not ready to fall into the arms of Rick, as he kind of expects her too. She’s ready to have "a few one night stands. To separate the heart from the body so [her] brain can start making better choices." But Jessie has a tender heart one that thinks that Rick needs a medicinal trial of happy pills.

On the road, Jessie encourages Rick to let go of his past and Rick shows Jessie that she’s already moved on from hers.   You can read another opinion of the Borrill book by SB Sarah.   B

* evidence that is obtained through improper means can be disallowed at trial.

→ Jane
Previous article: Harlequin Gives Away Free Book for Halloween
Next Post: EBooks Getting the Shaft from Writing Awards