PLEASE NOTE: The following review contains a few SPOILERS. If you prefer to avoid spoilers, you might not want to read this review until after you have read the book. 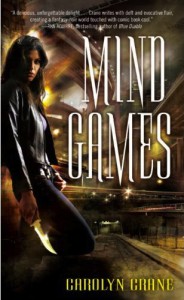 You've been part of the romance community since at least 2007, and I occasionally lurk on and enjoy your reading blog The Trillionth Page. Your debut novel, an urban fantasy called Mind Games, came out in March to great acclaim, so in April I downloaded a copy from the Sony store in order to give it a whirl.

Unfortunately, it took me over three weeks to finish reading Mind Games (I am a slow reader in the normal course of things, but not that slow!) and then a while to review it. It is a tough, tough book to review because it is stellar in some ways, and yet I also had some big problems with it. Before I go into what I think are the book's weaknesses and strengths, here is a plot summary:

Mind Games is narrated in first person present tense (a choice I often love, and loved here) by Justine Jones, a young woman living in a fictional Midwestern city called Midcity (I loved that choice, too). Justine suffers from hypochondria, which manifests itself in frequent delusions that she has vein star syndrome, a vascular malady which she describes as “the proverbial ticking time bomb in the head.”

Justine's mother also suffered from this phobia, and then she developed a very real case of vein star syndrome which killed her, so no amount of reasoning can make Justine believe that she herself is physically healthy while she's having one of her anxiety attacks. Her fear is potent, and one day Justine meets a man who wants to harness it.

Justine is dining at a Mongolian restaurant with her boyfriend, Cubby, when she is spotted by Packard. Packard is a highcap, a man with extra-sensory abilities. The existence of highcaps is hotly debated: many of Midcity's denizens believe in them, while the authorities and a few others say they aren't real. But Packard exists, and is able to sense other people's psychological structures. He knows without being told that Justine is a hypochondriac who believes she suffers from vein star syndrome, and claims he can cure her if she'll come work for him.

At first Packard doesn't reveal the nature of the work he wants Justine to do, so Justine refuses. Later, Carter and Shelby, two of Packard's employees, pick up Justine and take her back to the Mongolian restaurant, where Packard reveals that he can teach Justine to transfer her anxiety attacks into other people. Packard's team is a kind of “psychological hit squad” made up of disillusionists, people with psychological disorders who channel their own problems into criminals and thereby “crash” them so that they can then be “rebooted” into better human beings.

Justine doesn't believe in vigilante justice and she wants no part of Packard's brand of it. But Packard gives her a demonstration, allowing her to “zing” her fear into him. Being free of fear feels wonderful, and eventually, when Justine's terror of vein star syndrome returns a few weeks later, as Packard told her it would, she decides to accept Packard's offer. She does not tell Packard or his team of disillusionists that she plans to leave the group when she's thought of a good alternative, and she does not tell her boyfriend, Cubby, the full truth about her new job.

Justine's life as a disillusionist is complicated by her conflicted feelings about the profession, and her reluctant attraction to Packard. Eventually she discovers that just as she kept her intention to leave the disillusionist squad from Packard, he too, kept something very important from her. She also learns that Packard has been trapped in the Mongolian restaurant by another powerful highcap and that he cannot leave. She resolves to find a way to free Packard from his prison and herself from both her hypochondria and her new role.

You have a terrific writing voice and a gift for surprising ideas and creative worldbuilding, all of which made Mind Games so unusual that I haven't encountered anything this fresh and quirky in fiction since reading literary fabulist Judy Budnitz' debut collection, Flying Leap, well over a decade ago.

Take, for example, the Brick Slinger, a telekinetic highcap serial killer who terrorizes the citizens of Midcity by sending bricks zigzagging into people's skulls. Here is Justine's description of the situation, an inventive bit of worldbuilding:

The crime wave makes me sad and angry, and every year it gets worse. Now, thanks to our new serial killer, the Brick Slinger, the playgrounds and ballparks are empty even though it's the height of summer, and people scurry from cars to houses to cars, many of them wearing helmets and hardhats, even when it's ninety degrees.

Later, when Justine goes to her job at a boutique, you use the Brick Slinger's presence in Midcity to create a bit of scene-setting that is odd in the best, most wonderful way:

I lean on the glass counters watching the upscale shoppers rifle through the racks of dresses. A few of them wear steel-reinforced safari hats in pink or beige, the latest in protective headwear.

There are also the ways you use fresh metaphors to put your finger on Justine's feelings. The paragraph below captures beautifully how haunted she is by her hypochondria:

I pull the covers over me, wondering what it would be like to be Cubby. Cubby has faith in life the way you might have faith in a five-star hotel: It's a world of sunny swimming pools, plush towels, and capable people at the front desk, and your happiness is their number one priority. I want more than anything to live in Cubby's safe hotel. To go through one day without health fears. One day.

I have quoted so much because I think your language is wonderfully crafted. For this reason, when I started this book I was sure it would be a keeper for me. Sadly, it isn't, for the following reasons.

First, Mind Games was scary in places – a sign of effective writing, but I don't enjoy being scared. Second, this is also the kind of book where for much of it, it's not clear who, if anyone besides the main character, is trustworthy – and I don't enjoy that type of story very much either. Readers who don't share these preferences of mine, though, will probably like this book better than I did.

Aside from that the biggest problem, if I had to name one, was that the main characters felt static. While my perceptions of some of them shifted a bit, beyond the paranormal change in Justine when she channeled away her hypochondria, the characters never seemed to grow or undergo a meaningful change. That may be realistic, but it also made the book feel monotonous after a while. I think it's mostly because of this, and because of the above reasons, that the book took me so long to finish.

Justine's wit is the most charming thing about her, and I also like her vulnerability and her loyalty to her loved ones, but she is so good-hearted and so concerned with right and wrong that at times she comes across as someone who has no moral blemish whatsoever. Nearly every morally ambiguous act she carries out is something she is essentially forced to do. While I think we should all strive to be free of moral flaws, I also think it is a goal we can only approach without fully reaching. In other words, I don't fully buy that anyone as flawless from a moral perspective as Justine could actually exist.

Another problem with Justine's characterization is that nearly all the men in the book were drawn to her in one fashion or another, and she was described by one of them as beautiful (though she thinks she is only "medium-pretty"), so at some point, it began to feel as though she was just one mental disorder shy of being a Mary Sue. The fact that I still liked Justine despite all this is a huge credit to her narration, which was almost seductively clever.

But for whatever reason (maybe because we didn't get access to his point of view?) I never cottoned to Packard, never really grew to like or trust him, so for all the purported romantic chemistry between he and Justine- well, to use a dreadful pun, there was just no zing there for me. When Justine was transported by his kiss, I remained detached.

If Mind Games had been a romance, that would have killed it for me, but since it was an urban fantasy, I tried to let its other charms win me over.

Have I mentioned that the prose is stupendous? And the world-building? And that I think the premise is very inventive? Ultimately, these kept me coming back to the book. Your descriptions were music to my inner word geek. I love the way you can startle me with one daring word. A penis is actually described as “cucumbery” in this book. And there is this terrific description of Shelby:

Ringlets stands and smiles, revealing a chipped front tooth, which gives her a strange, carnivorous beauty.

Characterization, worldbuilding, and description are woven together in an exhilarating way in paragraphs like this one:

I'm surprised when Carter merges onto “the tangle”-‘a nightmarish curlicue of highways that's the fastest, most unpleasant, and most treacherous way to move between neighborhoods. Everybody sane avoids the tangle, which has been blamed for everything from Midcity's industrial decrepitude to, of course, the eight-year crime wave, in articles with titles like “A Dark Snarl at the Heart of Our Fair City.”

Mind Games is particularly difficult to grade because the premise, worldbuilding and language have tremendous flair, which would argue for at least a B- grade, but on the other hand, because of issues with the characterization, pacing and my personal preferences, my enjoyment level was ultimately no more than a C. And so, although I have no doubt that many readers will feel Mind Games deserves a higher grade, I go with the midpoint between these two ranges and give it a C+.

→ Janine
Previous article: REVIEW: The Best Man in Texas by Tanya Michaels
Next Post: REVIEW: Tipping the Waitress with Diamonds by Nina Harrington