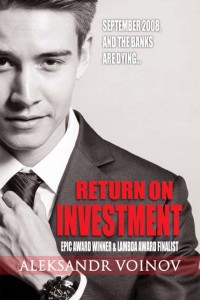 Martin David, an eager but inexperienced financial analyst, is the newest member of the investment team at Skeiron Capital Partners in London. His boss is an avowed financial genius, but he’s also overbearing and intense. Despite his erratic behaviour, Martin can’t help being drawn to him both professionally and personally.

Too bad his boss doesn’t seem to feel the same. In a firm where pedigree and connections mean far more than Martin’s newly-minted business degree, Martin feels desperately inadequate—at least until he meets the enigmatic investment manager Alec Berger, who promises to help Martin establish himself in the financial community. Martin is so charmed by Alec’s sophistication and wit that he gives him data that should have stayed confidential.

Then the financial crisis hits. Banks burn, companies teeter on the brink, and Skeiron’s survival is at stake. Martin is pushed into the middle of the fight for Skeiron—against both the tanking economy and a ruthless enemy who’s stepped out of the shadows to collect the spoils.

You kindly sent me a copy of your new, self-published novel and Sirius was also keen to read it, so we decided on a joint review. While the book is a Kindle Select release, it is free of geographical restrictions.

Sirius: I will confess that despite really enjoying your writing in the last couple of years I have read very few if any of your solo project due to the subject matter not being my cup of tea. This book sounded like something I could read, so of course I was interested in reviewing it. I do not know how I would characterize this book, but I do think that “gay financial thriller” is not a sufficient description for me. There is a very strong erotic element in it and I would argue that a romantic storyline is also present, although I definitely would not call this book a pure romance.

Sirius: For the first 30-40 percent of the story I was very irritated with the main character of this book. I could barely tolerate his stupidity in any character of any genre. In theory I had no problem with Martin being attracted to Alec. I mean to me he had all the charm of a snake from the very beginning, but I fully admit that I may have been influenced by the blurb. The blurb clearly states that Martin gives him confidential information, so this probably made me prejudiced againt him from the start. Quite honestly, I feel that the blurb gave out a very significant spoiler which should have stayed hidden, because it made me form expectations and I usually try very hard to enter the book without any preconceived expectations.

To go back to Martin and Alec, I guess I can see how Martin was charmed by Alec but only to a certain degree. I do not see how Martin could share confidential information so easily and without much (if any) hesitation. And he did it twice, although apparently he remembered that he had a brain eventually and did not give out a final piece of information which I guess was more confidential than what he gave to Alec the first two times. I get that people in real life do criminal things like “insider trading” because they want to make a lot of money and they do not care that it is illegal. But making a lot of money at least counts as some kind of reason to do illegal things, right? This was a young idiot doing stuff and I am not quite even sure why. I do not want to give out even more spoilers, but it felt strange. I did not feel that he was even in love with Alec – in lust maybe, not that it would have been enough for me, but at least it would have been some kind of explanation. Martin acted as if he did not understand all the seriousness of passing confidential numbers about his firm productivity to an outsider. Was he not given a drill about any information about a firm being confidential the first day he started work? I know I am sensitive about the issues of confidentiality, I am a lawyer, but I just could not buy that somebody in the world of finance is so dim. He just acted as if he had no or very little clue – without any thought. If he acted as a seasoned criminal I may even had less problems with this. I also think that in light of another thing Alec did Martin should have run away pronto.

Sunita: I found Martin frustrating as well. At first I felt sorry for him, since he was clearly in over his head with Alec and apparently in thrall to him. But I didn’t understand at all why he was so willing to give Alec confidential information. He didn’t hate his job, he seemed to want to progress in his career, so why would he jeopardize his future like this? For secret trysts at the Ritz and some fancy suits? There’s a word for someone who unethically exchanges confidential data for fancy gifts, and that word is not “ingenue.” I would have had a much easier time seeing Martin as going through a coming-of-age experience if he hadn’t *started out* so ethically challenged. Maybe this is influenced by the movie Wall Street and Martin is Charlie Sheen, but we just didn’t get enough of a sense of why he behaved the way he did at the beginning for me to have much sympathy for him. Since Alec was pretty clearly a weasel and dangerous from the first chapter and Martin experienced those qualities first-hand, I wasn’t on board to see the latter as starting out dumb and then growing up.

About halfway through the book I started to think about what it would be like if Martin had been an unreliable narrator. That would have been fun and I would have found his character much more interesting, because I really had trouble liking him as a naif (which I felt I was supposed to do).

“It’s not personal, Martin. Maybe it is for you. Be smart.” Francis gave him a smile, then brushed past and raised a hand to shoulder level. “Good night”.

Sirius: Martin’s crush on one of his bosses, a financial genius who is one of the partners in his firm, was much easier to understand and much easier to sympathize with. Feelings of never being able to measure up to him, wanting to mean something in Francis’ eyes, while I would not consider this storyline a full blown romance, I felt that this provided romantic element to the book and I liked them together.

Sunita: Yes, the Francis-Martin storyline was much more conventional and made more sense. Francis was a bit too larger-than-life in his character traits for me to fully warm to him as an individual: he was so handsome, so smart, so obsessed with his job, even his quirks seemed predictably fabulous, if that makes sense. I thought it was interesting that in the end he turned out to be quite old-fashioned in his approach to finance. It was as if we were supposed to see old-time M&A as somehow more ethical than the current financial world, and I’m not sure I buy that. But it was an intriguing twist and not one I expected.

There was something about Francis that intimidated Martin, from the first, rushed meeting during his interview to now, and probably for the rest of his time at the firm. The best way to deal with it was to stick to the claustrophobic concerns at Skeiron, pounding out one report after another. He knew those portfolio ultimately now, knew their market shares, their profit margins, their current value. To him, they were just set of stats, not people. Maybe the management figured prominently in Francis’s mind; after all, he did catch up with his CEOs regularly – but the people on the bottom rungs were invisible.

Sirius: I thought that Martin grew up a lot by the end of the book. I was very happy that apparently he learned enough ruthlessness from the villain but also had some fundamental decency in him. I really liked that and when I finished I even was glad that I “met” him.

Sunita: I wanted Martin to pay for the stupid things he did, or pay in a different way. In the end he had a bright future, the romantic relationship he wanted, and loyal friends. Everyone around him sacrificed more than he did. That kind of annoyed me, mostly because I didn’t think he deserved his good fortune.

Sirius: I really liked the settings of this book and this is a testament to the writer’s talent that he made finance sound so fascinating. Although I think the fact that I am completely ignorant about the finance played its part too – usually the more ignorant I am about the setting, the more eager to learn I am. The finance part of the book is written with authority, and since I have no knowledge to question it, the story swept me away.

Sunita: I agree, the setting was terrific, and the small details about the office, about deal-making, and many of the secondary characters were among the best parts of the book. The pacing felt off; it took a long time for the crash to happen, especially considering that’s the tagline of the book, and the last third was overstuffed with events (some of them really eyebrow-raising, like the bit with the priest).

Sirius: I also want to mention that I really liked Martin’s trainer and friend Josh – I get that Martin needed a friend outside of the crazy world of finance, but Josh ended up being such a sweet normal character in the sea of crazy, more importantly he felt like his own person with agency, not just existing to support Martin if that makes sense. Grade: C+

Sunita: I liked him too, and I liked Martin’s friendship with Ian. That was a very good depiction of how competitors are also friends. I found many of the smaller scenes (between Martin and Ian, Josh, and some of the other business associates) were more effective than the big set pieces. The one consistent misstep was the way the Dubai investor (and other potential Arab investors) were portrayed; they came way too close to stereotypes for my comfort (and the blanket description of “Arabs” didn’t help). Also, the description of British Asians as “exotic” needs to die a fiery death. Immediately. So, overall, a mixed but interesting read for me. Grade: C+