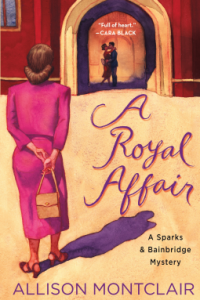 In London 1946, The Right Sort Marriage Bureau is just beginning to take off and the proprietors, Miss Iris Sparks and Mrs. Gwendolyn Bainbridge, are in need of a bigger office and a secretary to handle the growing demand. Unfortunately, they don’t yet have the necessary means. So when a woman arrives—a cousin of Gwen’s—with an interesting and quite remunerative proposition, they two of them are all ears.

The cousin, one Lady Matheson, works for the Queen in “some capacity” and is in need of some discreet investigation. It seems that the Princess Elizabeth has developed feelings for a dashing Greek prince and a blackmail note has arrived, alluding to some potentially damaging information about said prince. Wanting to keep this out of the palace gossip circles, but also needing to find out what skeletons might lurk in the prince’s closet, the palace has quietly turned to Gwen and Iris. Without causing a stir, the two of them must now find out what secrets lurk in the prince’s past, before his engagement to the future Queen of England is announced. And there’s more at stake than the future of the Empire —there is their potential new office that lies in the balance.

Jayne: Janine enticed me into reading the first book in this series, The Right Sort of Man. I didn’t grade it quite as highly as Janine did but I liked it enough to want to read the sequel despite what sounded as if it might be a slightly tawdry and a bit unbelievable plot involving Prince Philip.

Janine: Yes, I liked The Right Sort of Man a lot (my own review can be found here) and like you, I was interested in the sequel. The friendship and the repartee in the previous book won my heart.

Jayne: The story begins a month after the events in The Right Sort of Man in which we are introduced to Iris Sparks and Gwendolyn Bainbridge who are poles apart but successfully running a marriage bureau in post World War II London. Cambridge-educated Iris was in British Intelligence during the war while debutant Gwen lost her Royal Fusiliers husband to a mortar blast at Monte Cassino. Her brief time in a sanatorium due to her grief allowed her cold aristocratic in-laws to gain guardianship of her young son.

The Right Sort Marriage Bureau gained some notoriety and press due to the murder that Iris and Gwen solved that involved one of their clients. Now someone arrives with a hush-hush job for them. Not only is it to be kept secret, but the person who hires them can’t, or won’t, tell them a great deal, there is a short time limit before which results are needed, and it seems to be attracting all sorts of people with several different agendas. Who can Iris and Gwen trust, who is on which side, and will they survive their investigation?

I loved seeing Iris and Gwen again. They are obviously people with vastly different life experiences. Iris is educated, freewheeling, dangerous, outspoken, and owns her sexuality. Gwen is aristocratic, quiet, well mannered, and slightly naive in the face of the situations in which they find themselves. But they’re both learning from each other and at times envy each other. Gwen now thinks about pursuing an education or at least just learning how to do research and keeps reminding Iris that she promised to instruct Gwen in fighting tactics. Iris admits to some jealousy at how easy a life debutant Gwen had before the war along with all the social connections she maintains and upper class knowledge she has.

Janine: You’ve described the characters really well. I’ll only add that I love their friendship and their banter. The way they support each other and use one another as sounding boards makes for a great depiction of female friendship at its best. The bits of envy that have crept in only make it better; they add dimension and ground the friendship in reality, while showing their candor grow. The banter is anything but grounded in reality—Iris and Gwen are wittier than anyone I’ve ever met—but that’s part of what makes reading their dialogue a pleasure.

Jayne: Their growing friendship is a great aspect of the series. The scene in which they’re checking out another office as a possible expansion site and Iris worries about how attached Gwen already is to an impressive desk there (Gwen has named it Cecil) is hilarious. I also adore the relationship between Gwen and her son Ronnie although sometimes Ronnie seems a little too perfect for a six year old.

Janine: Good point about Ronnie being a little too perfect. It is characteristic of Gwen’s softness and of her tender heart that she’s able to meet her son on his own level without talking down to him.

Jayne: Exactly! She can connect with him and encourage him and does it without bad-mouthing his grandparents. Gwen’s worry over where Ronnie might be sent to boarding school ties in with this. By the way, do we know where Gwen’s family is?

Janine: Good question. There’s no mention of her family in this book and if it was mentioned in The Right Sort of Man I’ve already forgotten.

I also thought Iris’s relationship with her new beau was an interesting development.

Though most of the book is written in Gwen and Iris’s (third person) POV, there was a scene in his POV that I loved.

Jayne: I’m not especially crazy about him though he and his crew do come in handy at times. A friend of mine said that Iris has terrible taste in men and I tend to agree.

Janine: I don’t love him but he treated Iris better than I expected despite a touch-and-go moment.

Jayne: It’s nice to see Gwen and Iris use their specialized knowledge and skills to try to sort through the intricacies of what is going on then hack their way out of the thickets springing up around them. But these very intricacies and thickets are what didn’t work for me.

Janine: Agreed about their application of their very different areas of expertise. The thing that bothered me most—and I don’t think it’s a spoiler to say because it comes up very early on and the book blurb also mentions it—is that the mystery centers around investigating Prince Philip’s background.

I was uncomfortable with this because Prince Philip, Queen Elizabeth, and their relatives are all real people, some of whom are still alive today. This book is set in 1946 and that isn’t so far back. It’s not like a historical mystery from an earlier era in which a historical figure like Alexander the Great or George Washington appears. This to me is not fair game.

Jayne: Yes to this! I mentioned earlier that I thought this is tawdry. The plot ends up wandering around with odd twists and bizarre “where did that come from” moments.

Janine: For me some of those were fun but a couple were over the top.

Jayne: There are also a ton of characters and I often found myself stopping and muttering “who is this person again?” and needing to think for a moment to remember. The banter sometimes feels more clever than realistic and at times I just wanted a scene to move on as it bogged down.

Janine: I had to search my kindle for the names of a few of the characters to remind me who they were. I didn’t have the bogging down issues. The repartee had so many laugh-out-loud moments that up to a point I was willing to pay the excess cleverness as its price of admission. When I reached the end, though, I felt that the book would have benefited from more serious and poignant moments to balance out the humor. The Right Sort of Man carried its wit so much better.

Jayne: There were a few and one in particular which I liked: when Gwen and Iris are attending an evening social event and Gwen dances with a man. Both of them are wishing that other people were there (for Gwen it’s her dead husband) and make a quick verbal agreement to lose themselves in memories until the music ends.

Janine: Yes, that was lovely. Overall, though, I felt that the ratio of moments like this one to humorous ones was off.

Jayne: The final denouement was an exercise in exposition and over-the-topness and it had me shaking my head in disbelief. There is just no way it could ever have been pulled off. By the time the dust had settled, I honestly still didn’t know half of what had happened.

Janine: It was too farcical. I laughed and laughed but ended up feeling that it was too much of a good thing. The book devolved into silliness.

There was also a coda section, in which:

Then-Princess Elizabeth appears in person to thank the heroines. Again, this is not cool. She is still alive today and treating her as a fictional character, putting words in her mouth that she never said, is a bridge too far.

Jayne: When I first read that part, I thought it was kind of fun but in thinking back, I tend to agree with you.

Janine: The mystery was intricate and convoluted. I didn’t guess most of the solution but I was able to follow it all once it was revealed. It did take some thinking over, though.

Jayne: For the next book, and I hope there are more to follow, I’d love to see Gwen and Iris return to a more run-of-the-mill investigation. This is a series to be read for the historical tidbits, the joy of watching two women making a business venture succeed, and seeing them learn from each other. The mystery plot, on the other hand, never wowed me or won me over. C.

Janine: Agreed. I just wish the premise had been different. Most of the book was like a beautiful house built on a shaky foundation. It crumbled apart by the end.

I love the heroines (and their male friend, Sally, is a dear). There were some great moments, like the ones between Gwen and her son or the moment, or the way Iris and Gwen’s work roles are treated—the value of bringing about more happiness in the world is acknowledged. In the end, though, it wasn’t enough. C+.

→ Jayne
Previous article: REVIEW: The Grove of the Caesars by Lindsey Davis
Next Post: REVIEW: The Runaway Montana Bride by Joan Kilby