Thanks for sending me a copy of ‘Getaway Girl” to review. However, once you read my letter, you might not be so happy you sent it. 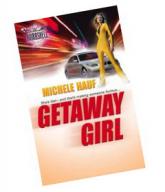 Jamie MacAlister loves speed and cars. Put the two together and she’s in heaven. She’s lived in Paris for years, acting as a hired driver. For anyone who wants something, or someone, taken from here to there and is willing to pay the price, she’s the best there is behind a wheel. After working for the Network, a slightly shady group which doesn’t inquire into legalities, she’s decided to break free and go straight. Only she’s finding out that someone 1) is keeping tabs on her, 2) might not want her to stay legit, 3) wanted to have her kidnapped and ultimately 4) may be trying to kill her. But is it the Network? Or the new group she works for, the Faction? And where does sexy Sacha Vital fit into all this? Is he working for the good guys or will trusting him get her killed?

I like Jamie. She is what she is and she makes no excuses for it. That doesn’t mean I understand her. She tends to jump to conclusions based on very little evidence. True she was very confused by what was going on but if I had been burned once, I’d be twice shy. No way would I take anyone at their word. And why did she take the bullets *out* of her gun when she fled her apartment?

While I also liked Sacha, his reason for getting involved in the whole mess made no sense. Why would he think the princess could tell him anything about the woman who tried to kill her? And if he’s got underworld connections, why can’t he approach the Network? And why couldn’t he call some of his Paris employees and get some clothes from his Paris house when they’re stranded there in the end? What’s the use in having thugs if you can’t order them to bring you some pants? ;)

I guess you were trying to convey how confused Jamie was with the crosses and double-crosses but honestly, you confused me too. I kept having to stop and reread whole paragraphs to try and keep things, and people, straight and that really interfered with the flow of the story. And then there’s the word gotten. I’ve learned from British authors that in Britain, they don’t use that as the past tense of “to get.” They use “got.” OK, I know that’s a minor niggle but it’s something I watch for now when an American author has British characters.

I am impressed by the car stuff. My car knowledge is pretty much limited to insert key to turn one on, press the gas peddle to go and the brake to stop. Now you’ve got me wanting to try a donut spin! And did you take a trip to Paris to learn all the streets and landmarks? That would be an awesome tax write-off. Honestly, Mr. IRS Auditor, I had to take this trip to Paris for my work.

I see that you’ve got at least one more “Network” book planned and I will read it. Tell me, will we see Vincent again? I do hope so cause I love sexy Frenchmen. I’ll be waiting for
it but in the meantime, this one gets a C+.

→ Jayne
Previous article: REVIEW: Nothing But the Truth (and a few white lies) by Justina Chen Headley
Next Post: REVIEW: To Distraction by Stephanie Laurens