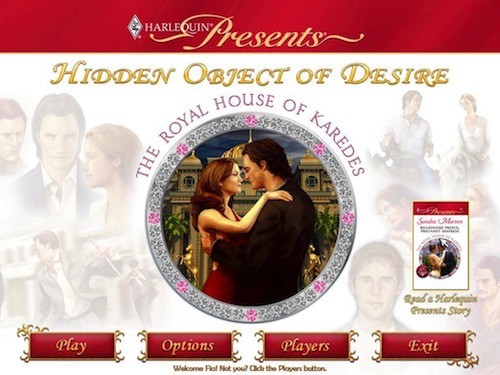 Allie’s on a quest to find some breaking news in the Kingdom of Adamas, but must now choose between her friend`s well-being and true love! The bachelor Prince of Aristo is the most enchanting man she has ever met, but she must fend off his charming advances long enough to figure out what is going on. Help Allie find valuable clues in

The last line – “Please note: the included free Harlequin novel contains romantic themes.” – amused me so much that I couldn’t stop smiling while I waited for the game download via BigFishGames.com to complete. It took between fifteen and twenty-five minutes on ordinary broadband, so I imagine it’d take roughly an hour and half for those on dial-up.

Because of a book cover on the start-up page, I thought the game was an adaptation of Sandra Marton’s Harlequin Presents romance, Billionaire Prince, Pregnant Mistress, but I was wrong. The cover is to show which book is offered as a freebie in form of a digital book (PDF), which comes with the game. As the game starts, an open book appears. American reporter Allie (no surname) and her photographer Shaun, are in Adamas, a wealthy-looking town on a Mediterranean island, to cover the Aristan crown prince Adrian Karedes’ thirtieth birthday celebration. Okay dokey. I clicked to continue.

After Allie and Shaun arrived outside the hotel, a pop-up dialog appears:

The story-based conversations that appear at the beginning and end of each scene can be toggled on and off in the options menu. Would you like to skip all story dialog now?

I had no choice but chortle at that. It seemed such a weird option. However, had I known how the story would go at the time, I would have clicked “Yes’. Double-clicked, even. In the game layout, there is a bar on the left side, which has three areas: the list bar, the Hint bar, and the Menu bar (which contains Play, Options, Load, Quit). In Options under Menu, there are two options: Easy or Hard. I tried both ways and the differences lies with the Hard level, which doesn’t offer colour-coded clues; mini games are a little more challenging (read: more interesting); a hint bar takes a bit longer to recharge, and the HQN logo isn’t always easy to locate.

In the main screen area, this is where you pay attention to either a puzzle or an episode of the story, which usually occurs between puzzles to mark the progress of the story.

The location is filled with various objects. Some are outright weird, such as a bunny in a hotel room. When you find it, you click on it and it’ll disappear while the object on the list is crossed off. In each playable scene, there is always one object that advances the plot, such as Allie’s party outfit, Shaun’s camera, or pieces of paper (which might then become a jigsaw puzzle).

When you’re stuck or tired of finding a certain object, you simply click on the Hint bar to show a circle of lights over the elusive hidden object.

There are three ways of charging up the “bar’ of the Hint option:

If you randomly click around the playable scene too often in a go, the cursor will freeze for a couple of seconds to remind you this is draining the Hint bar. The rest of the puzzles are jigsaw puzzles, memory games ( and logic puzzles (all involves numbers, which I initially found alarming as I’m dyscalculic, but I managed to solve them without help; it’s that easy). If you get stuck or bored with a certain mini game, you can always click on “Skip’ (which appears after a minute or so) to bypass this mini game.

The overall design makes it simple enough for anyone to learn how to play the game with ease.

Still, how was the gameplay? And the story? Ha! What story? Actually, what romance? Let’s be fair-‘ there is a plot of sort, which involves a conspiracy against the Prince and it’s down to Allie and Shaun to put a stop to it. It’s quite sad that this plot is a lot more interesting than Allie’s romance with the Prince.

Their romance is narrated through brief conversations and super-short “dates’ in chat bubbles and still graphics (and one in a while, a comic strip). And there is always something happens that cuts their date short. One dance, oops! I have to go. Hi! I’m so sorry I was busy. Want to go for a horse ride? After a cheesy comic strip, oops! I have to go. And on it goes. I mean, seriously, the romantic development of Allie and her Prince barely exists.

In a way, it’s quite ironic that for a game to revolve around the Harlequin branding so heavily, we as players don’t get to see the actual development of Allie and Prince Adrian’s relationship. Prince Adrian dashed here and there so when he or Allie made love declarations, it prompted me to say, “Based on what? You didn’t even see him that much. You saw his advisor a lot more, for heaven’s sake.” I felt it would be better if it was Prince Adrian who solved the puzzles, not Allie’s colleague Shaun who seemed to have more fun by getting tangled with a conspiracy to steal the Prince’s place in the throne.

Either way, Allie and Prince Adrian of Harlequin Presents: Hidden Object of Desire wins an award for having the shortest courtship in history of romance genre. I was going to say one day, but I can’t be sure. There isn’t really a good sense of time transition. At least, not for me.

As for the gameplay? I felt there were too many Hidden Object sequences that didn’t seem to be that interesting. I would have liked it more if it was balanced with mini games and puzzles. I enjoyed the Map puzzle (on the Hard level) the most. It was challenging and interesting.

Although I was new to casual gaming, I wasn’t impressed. I was gutted, to be honest, especially after I played a couple of other HOGs. Because it could have been so much better. Good HOGs do exist. Such as Empress of the Deep: The Darkest Secret, which is probably the best and most enjoyable HOG I played so far.

Could a romance work within a HOG? A couple of months ago, I was roped in as a beta tester on Tiger Eye, Part 1: Curse of the Riddle Box, a HOG adaptation of Marjorie M. Liu’s debut romance novel, and having played it, I certainly think it’s possible.

But this doesn’t mean Hidden Object of Desire is the worst game (A Vampire Romance: Paris Stories wins that award; hands down) because it isn’t. It’s just that- well, it’s average. Forgettable, even.

If Harlequin issues another HOG, I’d probably go for it because I can’t help but hope it’s an improvement on Hidden Object of Desire. Until then, I’d advise you to give the free one-hour trial a try to see if you would enjoy it.

Chances are- you probably would if you don’t have the time to devote to a game longer than twenty minutes per day. I played this game four times (for the sake of this review!) and each time, a list of objects was different, which could justify the cost in terms of replayability. C+

Mac version (10.4) and Windows version (XP/Vista) A one-hour trial is available for both operating systems. Full game: US$6.99 All major payment methods (including paypal) accepted and gift certificates available.

I’ll play and review Vision in White (based on Nora Roberts’s novel of same title) and Tiger Eye, Part 1: Curse of the Riddle (based on Marjorie M. Liu’s novel) next.