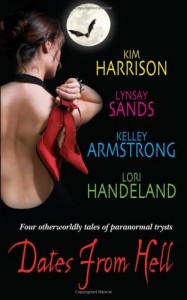 Anthologies that are produced today are a mismash of excerpts, prequels, reprints. The original works that are included seem rushed and not tight. The best anthology short story I have read in the past five years was Nicole Camden’s “The Nekkid Truth” in Big Guns Out of Uniform published in 2003. In the space of a short story, Ms. Camden was able to portray a damaged heroine finding peace with one with a lover who has been interested in her for some time. It was the entirety of the love story in the space of 100 pages or so and managed to convey sexual tension, eroticism, love and character development. It had great atmosphere in keeping with the heroine’s disability.

Unfortunately I did not find any one of your offerings to be at the same level as Ms. Camden’s. Of course, you can revel in the fact that you all are multi-published authors with big contracts and Ms. Camden is not. Let me address each of you separately.

1. Ms. Harrison. I didn’t realize that you were the big name in the bunch. I thought that was Ms. Armstrong but your witch series must be doing well. I have read the first two and the have the third one TBR but haven’t been able to bring myself to read it. This short story is set shortly before the opening of your first book and features Ivy as its main character. This is a dark story of Ivy’s attempts to progress up the ranks in her employment while maintaining her own personal integrity. Her boss is Art, a 40 something undead vampire. Ivy is a living vampire. As a living vampire, she craves sexual release. It is strongest with those undead vampires. Ivy has been abused by the master vampire Piscary. Ivy is a dark and damaged creature. She despises Art yet is drawn toward him. Techinically, this is probably the best written short story of the bunch. It is fairly tighted plotted and has its conflict resolved within the short story confines. It is the least emotionally satisfying of the bunch. Because this is marketed as a romance I expected a romance and was disappointed. It gives insight into Ivy’s character but you did mostly showing and almost no telling. C+

2. Lynsay Sands. I haven’t read alot of your books. Apparently you were the comic relief. Your story featured a woman who is exposed to a lab experiment giving her the ability to shapeshift into any person that she is able to view in a photograph. (Think Honey I Shrunk the Kids). The hero is the head of the experiment. The plot features the heroine masquerading as a man as a date for the HS reunion of the hero’s sister. She also goes to the reunion as the date of the hero. Hilarity supposedly ensued as the heroine rushed back and forth from the bathroom doing her quick change routine. A jarring note was the name of the man that the heroine was impersonating: Brad Cruise. Please. That was so horrible I tried to mentally skip over it each time it appeared. Don’t ever do that again. Make up a name or choose one name but don’t try to create a name based upon two of the most iconic movie stars of the recent decade. Based upon that and the stupidity of the story, you get a D.

3. Kelley Armstrong. I tried not to let my personal love for Ms. Armstrong influence my view when I read her short story. While I love Ms. Armstrong, her story required you to have knowledge of many characters outside of the pages who live in the world her novels have been creating. It features a half-demon and Karl Marsten, who apparently is turning over somewhat of a new leaf. The half-demon works for the interracial counsel collecting information about the paranormals, or so she thinks. While I loved finding out a bit more about Karl and I liked your half-demon creation, I didn’t think the two of them had much spark. I also thought that it required too much familiarity with your previous world building to be readable. C

4. Lori Handeland. Yours was a good idea that suffered from time constraints and characters from romance central casting. The heroine is a normal woman who just happens to be a virgin. Because she is a virgin, she is a prize for a incubus/demon/something created by the devil. The hero, supposedly an anti-hero archetype, is a demon/incubus/something slayer who routinely fights the devil and his minions. The resolution of the story featured a deus ex machina. For that, I have to give a C as well.

Fans of the Harrison and Armstrong worlds will find this book to be a can’t miss but others who are just looking to fill a paranormal jones should probably look elsewhere.

→ Jane
Previous article: REVIEW: A Gentleman by Any Other Name by Kasey Michaels
Next Post: REVIEW: Rescue Me by Jaci Burton