Some of your books I love. Some of them I hated. And some that I keep reading despite things which annoyed me. “Cold as Ice” is one of the later. I liked it a lot better when I first finished it but after a week of contemplation, all the little niggles are jumping out at me. 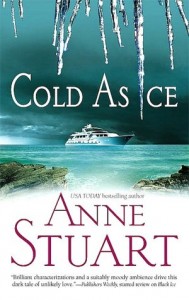 Genevieve Stuart works better for me than Clueless Chloe of “Black Ice.” But she didn’t have far to go to be better. GS has more backbone and is willing to go down fighting rather than just sit there in a haze and let someone kill her. But considering how smart this lawyer is supposed to be, she sometimes needed a clue about who was trying to save her and who just wanted to “do” her ass before killing her. Sure she didn’t know what she was walking into on the billionaire villain’s boat and the early hours on the island were confusing but, Lord help us, by the time Peter laid out her escape before the island went boom much less was rescuing her from Harry’s little California hide-away, she ought to have figured things out. And her attempts to escape from the hotel room should have been spent banging her head against the window to straighten her brain out rather than hurting her hands and feet. And why does she end up gardening in Laura Ashley dresses? Why not wear the jeans and t-shirts she rediscovered she loves wearing instead of her high priced Lawyer Outfits? Why do American authors make their American heroines think the English dress like idiots (see also Lisa Cach in “Have Glass Slipper Will Travel.” )?

Then there’s the villain. Harry’s so particular about everything that I’m surprised he wouldn’t think it’s odd that suddenly all his long term employees are leaving him. And why does he have to be into all that sick, twisted sex stuff? I get that he’s evil, I get that he doesn’t give a damn about anyone except himself and he wants…something (power? money?)…so you don’t have to make him a sadomasochist/pedophile for me to hate him and want him dead.

Now as for Peter Jensen, I didn’t like him as much as Bastien. One minute he’s the Man with No Emotions, bestest agent evah, who blends in with wallpaper and who always gets the job done and the next he’s getting attacks of conscience. Which is it? Either he doesn’t care who he fucks/kills or he twists himself into pretzels to avoid killing an innocent. And hasn’t this series proved that no one ever knows who’re the good guys and who kicks puppies? So why the agonizing and mission delays to save GS?

Which leads me to the middle part of the book. Why the delay in killing Harry? Why do they all have to wait around on the island for 2 days? It’s not like they’re questioning Harry to try to determine what other little surprises he has in mind for his world takeover or financial takeover or whatever he ultimately had in mind. All around the world the Committee agents are furiously trying to discover this but not on the island. There it’s just GS and PJ circling each other, fixing food then fucking. Why isn’t Peter working Harry over for intel, why is Harry kept doped up rather than just offing him, why did they all even go to the island in the first place if all they’re going to do is blow it up in two days?

But I didn’t worry about forgetting any details about how ruthless Peter is, how he never screws up an assignment, how he can’t miss a shot, can fuck with no emotions, never kills innocents because it was repeated endless times to make sure I remembered it. Same with Harry’s ruthlessness and sadism. Same with Isobel’s agonizing over killing innocents. And I guess she’s the reason for the new softer, kinder Committee. I have to admit that I liked the Committee better when they were more ruthless. Hmmm, does that make me a sick, twisted reader?

So, why did I keep reading? Well, the story sucked me in and while I was reading it, I wanted to know what would happen next. I wanted to see how cold and calculating Peter would be and watch him attempt to deal with his feelings for GS. I wanted to see how long it would take GS to figure Harry out. And believe it or not, Harry with his cheerful ruthlessness ended up growing on me. I could just believe that he had the emotional and psychological disconnect to think he could get away with what he was planning and he acted like a man with billions would, like everything was possible for him. He worked much better for me than villains who are portrayed as foaming at the mouth and chewing on the scenery.

Now as to the future, I am interested in the newest Committee agent we’ve been introduced to, Takashi O’Brien. But then as Bam said, I was fascinated by the idea of Peter Jensen too. I hope the next letter I write about a Committee book will be happier than this one. C+ for “Cold as Ice.”