REVIEW: The Taming of the Duke by Eloisa James 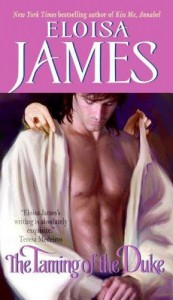 I am just a simple reader. I understand that you like to write books with subtle clues and hints as the character evolves. But because I am a simple reader, your subtle clues and hints went way past me. Let’s look at your recent contribution to the historical romance market. Your writing is superb. You have a deft hand with dialogue and interfamilia relationships. But the relationship between the hero and heroine left me dissatisfied and with questions that should have been resolved in the story. The plot is thus: Imogen arrives at the Duke of Holbrook’s home to find his illegitimate brother, Gabriel, and the brother’s child living there. Imogen determines that Gabriel is the perfect man with which to engage an affair. Rafe is madly jealous.   In previous books, Rafe’s admiration has been building to this crescendo.

Gabriel is not interested in Imogen. He feels his illegitimacy keenly knowing that Imogen sees him worthy only of an affair and not marriage. Besides, Gabriel has fallen in lust with another woman. When Imogen makes advances, Gabriel rebuffs her but realizes that in doing so, he hurts her feelings. He invites her to a masked outing and then goes to Rafe to have Rafe take his place.

Thus, Rafe and Imogen carry on this improbable affair night after night without Imogen ever guessing that it is Rafe and not Gabe. Imogen falls heavily for Gabe, staring at him during the day with stars in her eyes, as if he were water after she had been in the desert for a month.

The problem with these masquerade romances is that I can never really tell if the deceived is in love with the character that the deceiver is projecting or the deceiver himself. I felt that Imogen was truly in love with Gabriel. She was deeply hurt when Gabriel rebuffs her during the day after a delicious night of love. Her heart pounds heavily when he is near. Rafe, during these evening excursions, talks like Gabe and endeavors to act like Gabe, curtailing his more naturally acerbic responses and idiosyncracies that make Rafe Rafe.

So, in the end, when Imogen suddenly declares her love for Rafe, I am not a believer. Imogen, to me, loves Gabe or the Gabe that Rafe created. It is also unbelievable to me that Imogen suddenly works out it that it was Rafe who was seducing her. You said on your website that Imogen knew that Rafe was Rafe before they made love the first time. But I can’t be quite sure when that happened because when Imogen sees Rafe naked, she believes that it is Gabe. So was it at the point of penetration that Imogen magically sussed it out?

Another difficult point was that Imogen truly wanted to be pursued and courted. You resolved that in one scene. I just didn’t buy into the love story even though I wanted to. Oh, I believe that Rafe loved Imogen completely. I just didn’t feel that love was reciprocated. I felt empty and sad at the end of the story. C- for you.