REVIEW: The Hazards of Hunting a Duke by Julia London

I am not sure whether Simon&Schuster did you a big favor by giving us ebook readers a web exclusive because this is gonna be one of those “Dear Jane” letters. I have purchased several books by you and after each book, I wonder why it is that I am buying the next one. I am going to try to quit you after this and no amount of special enticements by your publisher are going to lure me back. Really. Don’t smirk at me. I realize I am weak willed when it comes to books. Okay, but you are only going to be a library read from now on. 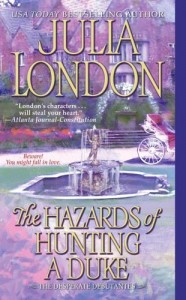 Your new series features the Desparate Debutantes. I almost keeled over laughing because that seems to be in direct conflict with the new series launched by Sabrina Jeffries featuring the Monneyed Misses (my appellation). So your girls, two sisters and a cousin, have a rich momma married to a turd of a man who decides to cut off the girls after the death of the mother. After the mom dies, the turd of a man runs off to France in search of his mistress. Could you make a villian more comically evil? A man who chases his mistress into foreign soil before the dust has settled on his wife of 10 years’ grave? A man who decides that three gently bred misses will have no servants and no new gowns and no life? Come on. Unrealistic much?

So the plot then is that these three misses must find rich husbands. Ava decides that she will pursue the Marquess of Middleton. Jared Broderick, the Marquess, must marry to avoid his father telling the whole world a deep dark secret. Before I go on, let me just say that the name Jared is an unfortunate choice these days. It used to be that the name Jared would conjure up Jared Leto (who played HS hunk, Jordan Catalano, but whose appearance in Alexander made me swoon) and thus make me sigh appreciatively. Nowadays it makes me think of Subway and as great as it is that Jared has lost all that weight, I didn’t want his image superimposed on your supposedly “dangerously handsome” (your words) hero. Just a thought. Oh, and dangerously handsome? Overused. Please chose another description.

Okay, sorry, back to the plot. Jared and Ava both need to marry so they marry each other. But there must be tension and what creates the tension. Yes, the dreaded mistress. Jared has a long time mistress before he marries. He even is willing to marry her himself but she, a respectable widow, knows that Jared’s father won’t approve and will cut him off. Unbelievably to this reader, the mistress would rather be a mistress to the heir to the dukedom rather than wife to a Marquess. Whatever. And the whole hero can’t love because his father didn’t love his mother theme? ARGH! Again SO OVERUSED.

Then of course, is your wordy wordy wordy prose. You must think that we readers are simpletons. Admittedly, I act like one alot but I can get sublties now and then. You and Eloisa James must get together and decide how to strike the happy medium between 3-4 clues to solve the mystery and you telling us the whodunit on the front page. For example, I do not need for you to tell me that the haute ton is the highest echelon of London society. Or that Jared is having deep thoughts. The thoughts, if truly deep, should speak for themselves.

What you do well is dialogue and character interaction. You have fun ideas for your books. Your excerpts are tantalizing but while the appetizer may be delicious, the meal is overlong, tough and unsatisfying. Please don’t try to tempt me anymore. I am not going to fall for it next time no matter how much I think your contemporary series looks cool. If it makes you feel any better, I loved Wicked Angel. I am giving you a C- for this effort.

P.S. Your website needs some help. I really dislike those graphic buttons that I have to rollover to figure out what link to click on.

→ Jane
Previous article: REVIEW: Seducing Sullivan by Julie E Leto
Next Post: REVIEW: Threesomes (Menage a Trois) or how to increase traffic to your new blog