I approached your contemporary romance set in the world of the London theater, Act Like It, with anticipation, for two reasons. First, I have a bit of theatrical experience, both on stage and (more) behind it, so I love to read books set in this milieu. Second, all of my friends who’d read the book raved about it, and excellent reviews had appeared both here and elsewhere. 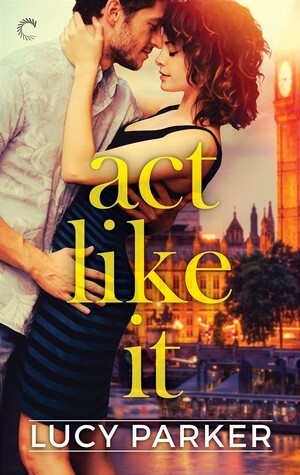 Act Like It has been described as an enemies-to-lovers story, but Elaine “Lainie” Graham and Richard Troy aren’t truly enemies when the book begins; it’s more that they have a low opinion of each other. Lainie recognizes Richard’s acting skills and stage charisma, but due partly to his grumpiness and partly to his antipathy for her ex-boyfriend, Will Farmer, she thinks he is an asshole. The same antipathy causes Richard to dismiss Lainie for having recently dated Will.

Lainie, Richard and Will are all actors, appearing together on the London stage of the Metronome Theatre, alongside co-star Chloe Wayne, in a play called The Cavalier’s Tribute, which is now four months into its run.

Lanie is called into Bob, “the stage manager’s” office (more on this later) and finds Pat, the theater’s PR manager, and Richard Troy’s agent, Lynette, lying in wait for her. For reasons not entirely of his own making, Richard’s image on social media has recently take a nosedive, to a point that is affecting ticket sales, something Bob is greatly worried about. Lainie’s reputation, however, is sterling due to her involvement with Shining Lights, a charity for kids with cancer. The solution, it’s been deemed, is for Richard and Lainie to start “dating” publicly, as this will repair his reputation and presumably boost ticket sales.

Lainie’s involvement with Shining Lights is motivated by her sixteen-year-old sister’s death of cervical cancer eighteen months earlier, and when Bob promises to donate half the proceeds from two Saturday night performances if she pretends to be Richard’s new girlfriend, she reluctantly agrees. Richard has ambitions to become president of the Royal Society of Performing Arts and needs to repair his reputation to do that, so he too gets on board.

Richard accompanies Lanie to charity events and they also attend an awards ceremony together, as well as appearing on a television talk show to promote the play. Lainie cheating ex-boyfriend, Will, is none too happy about this development, but Lanie and Richard discover that each isn’t what the other thought. Despite Richard’s grumpiness, he’s a decent person and even knows how to show he cares. Although Lainie dated Will, she’s clearly more intelligent than Richard took her to be.

The two fall for each other with only small bumps in the road until Will inflicts some damage, leaving Lainie determined to repair it.

Lainie is an immensely likable character—smart, witty, and down to earth, as well as caring. Richard is sweet under his grumpiness. The narration and dialogue are peppered with funny quips and repartee. There is also a touching chemistry between Richard and Lainie that owes more to emotional connection than to lust, something I often crave from books but don’t often find. So I should have loved this book, like my friends.

Alas, my problems centered on four things— insufficient stakes / character goals, dearth of backstory, the inconsistency between what backstory there was and the characters as portrayed, and finally the lack of authenticity of the theatrical milieu.

First, stakes and goals. We’re told Richard needs to repair his public image but outside of dating Lainie, he makes little effort to do so and does not seem to care much about it. Therefore, as a reader, I didn’t care much if his reputation was repaired.

Lainie does seem to genuinely care about the charity, inasmuch as she attends a Shining Lights fundraiser and does a 5K run for them. But the dots are never connected between the proceeds Shining Lights will get for her participation in a staged relationship with Richard and what that money could mean for kids with cancer, and we’re never made to feel any worry over what will happen if this funding falls through. So again, the success or failure of their charade doesn’t matter much.

Richard wants the presidency of the Royal Society of Performing Arts, and Lainie thinks of the organization as stodgy, so there is a golden opportunity to make the reader care about Richard’s goal by having Richard get excited about the changes he wants to make to bring the organization up to date. But this never happens, so it’s hard to care about whether he attains this goal, except late in the book when it is threatened and then only because it affects his relationship with Lainie.

Lainie is almost completely goalless. There’s a television role she nearly loses, but she shrugs that off rather easily. Acting is such a competitive profession that drive and ambition are necessary to success in it, but Lainie never displays these qualities. Other than during the novel’s black moments, her default setting ranges from chipper to unruffled, with the occasional misty-eyed moment when her late sister comes up. I couldn’t help but see her as having been constructed to be amiable to readers, without regard for verisimilitude.

So neither Richard and Lainie’s careers, nor the success or failure of their charade, matter much, making the first half of the book, despite the humorous quips, pretty boring. The novel takes too long to answer the question “Why should the reader care?”

Second, backstory. The theater is an unusual career, and Lainie is in her late twenties in a field where people generally start young. Yet Lainie almost never talks or thinks about how she was bitten by the bug, how she trained, how she supported herself while waiting to catch her first break, or what her previous roles were. As an actress, she seems to have sprung full-grown into the book, like Athena from Zeus’s head—even the awards ceremony is said to be her first.

Richard’s personal life backstory is murky, though in his case we do get a little career stuff. We also know a bit about his wealthy (because apparently it’s not enough for Richard to be attractive, famous and talented) asshole of a father, but we don’t see how that affected Richard’s development as a child.

And here the third issue of consistency comes in. As a child, Richard seems to have been completely unloved, yet he seems capable of love in the present day. At the end of the novel, he tells Lanie that she’s the first person (not woman, person) he’s ever loved, and given that he is in his mid-thirties, I find that impossible to buy. There would have to have been someone (even if only a nanny or schoolteacher) in Richard’s childhood who loved him and whom he loved in return for this to be possible.

Similarly, despite having lost her teenage sister only eighteen months earlier, Lainie seems to be well past the first four stages of grief. We’re told that she channeled them into the charity and from all appearances that took care of that—another thing that’s tough to buy.

Fourth, authenticity of milieu. The premise of the novel, that a fake relationship could boost ticket sales for a theatrical play, isn’t believable. I’ve never heard of people being aware of a theater actress’s charitable activity or caring whom she dates. If Lainie and Richard had been movie stars, this would have been a lot more convincing.

Then there’s the fact that the theatrical company does not act remotely like a company of actors and crew. In fact, stage hands, dressers, props master, costumier, and lighting and sound operators might as well not exist, for all we see of them.

The camaraderie of coming together to put on a show, the almost familial dynamic of the theater, isn’t captured. Instead, the actors glare at each other, show up twenty minutes late, and snipe at one another between scenes, all of which is incredibly unprofessional.

No one seems to take their job seriously—we don’t see any of the actors do vocal exercises, stay in character during scene changes, take home the emotional demands of their roles, or even run lines.

Moreover, there does not seem to have been much research done into how theaters actually work. Four months into the run of The Cavalier’s Tribute, rehearsals are still being regularly held for the same show, something almost unheard of. Typically rehearsals are held for some weeks leading up to the start of a show’s run, but not beyond that. It is not explained why the director of The Cavalier’s Tribute diverges from this practice, and his doing so isn’t portrayed as anything noteworthy.

The reference to Bob, “the stage manager,” and ticket sales, is profoundly wrong, because a stage manager’s job has nothing to do with a drop in ticket sales, nor would a stage manager have the authority to donate half the proceeds from two shows to a charity. A stage manager is on staff, like the actors. He or she assists the director in rehearsals and during performances calls the show, a job that entails giving cues to the stagehands and to people running the props, light board and sound board. Profits and losses aren’t a stage manager’s responsiblity but those of the producer.

While she is out sick, Richard tells Lainie that the theater is barely surviving without her, and adds, “Your understudy is rubbish.” With so many skilled actors vying for relatively few jobs, how likely is it that anyone could be an understudy for a major role on a West End stage yet be so bad?

To summarize, there’s nice chemistry between the main characters in Act Like It. The narration employs witty metaphors, so it’s clear the author knows how to string words together. The main characters are appealing, even if they aren’t convincing as theater people. But I was bored for half the book and frustrated by the obvious lack of research. The novel feels oddly empty, full of missed opportunities, when it could have been much more interesting and rich. C-.