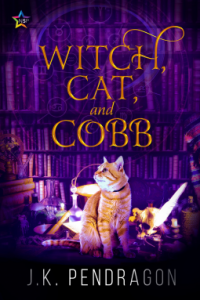 Destined for an arranged marriage she wants nothing to do with, Princess Breanwynne decides her only option for escape is to run away. After announcing this plan to her trusted cat, Fen, she’s shocked when he asks that she take him along.

Following his suggestion to venture into the lair of the Swamp Witch begins a life-altering adventure and reveals shocking information that will lead to more than one happily ever after—if she and Fen survive.

I have to admit to mixed feelings about this one. The blurb made me think it would be a little bit more suspenseful than it was (“if she and Fen survive.”) and there was a bit more information and life altering situations then the novella really had room for.

Princess Brean basically bolts for the swamp when faced with an arranged marriage to a prince. It’s not because he’s awful (which is nice) but because Brean is only attracted to women and no matter how much she’s told people this, they haven’t truly believed her. She gets the shock of her life when she tells her cat her plans and he asks to go with her. So – a talking cat but also a talking cat who could talk for twenty years and knew where to go in order to fix what was wrong in his life but didn’t do it. He gives Brean an excuse but given how desperately he wants to fix his problem and how much he whines about it, it was a lame excuse to me.

The witch – Mel – turns from slightly arrogant, to aloof, to remorseful at the drop of a pointy hat. Then Mel tells Brean that Brean isn’t staying in Mel’s cobb house in the swamp but then quickly changes her mind. And for being a witch as long as she’s been, she’s not very good at it. This is definitely a fantasy-lite.

The short length of the novella didn’t allow for a great deal of character depth either. Brean seems little more than a petulant teenager who acts younger than she is, Fen the cat tosses in some snark and cattitude – but little else – while Mel can’t seem to decide for long what she wants to feel. I also wanted to see more development of the romance between the characters who fall in love. The declarations seemed to come out of nowhere no matter how long a time had been spent in the swamp. Then in the end, Brean basically runs away from her responsibilities again and lets others fix the diplomatic mess she left behind – twice. During a section near the end, I was also confused and spent a lot of time trying to figure out who was who when people “changed” back and forth.

What I did like is the representation – the story is packed with that and I did get a sense of how desperate two characters were to have their bodies match their identities. I have to say that I’m glad that the trans-species aspect never became sexual as I think I would have been scarred for life. I will give Brean credit for sticking to her truth about who she would and wouldn’t marry. The descriptions of the witch’s cottage and surrounding area were also charming. I wish I could say the whole story worked better for me but it just didn’t. C-

→ Jayne
Previous article: Wednesday Good News
Next Post: REVIEW: For He Can Creep by Siobhan Carroll