REVIEW: Wish You Were Dead by Todd Strasser 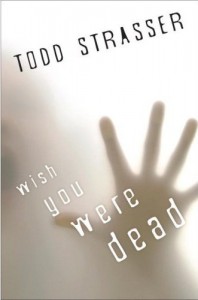 I think readers of a certain age and demographic will be familiar with the genre of books to which your novel belongs: the teen suspense novel. As a tween, a good chunk of my reading material consisted of schlocky teen horror writers like Christopher Pike and R.L. Stine but when it came to the teen suspense novel, no one topped Lois Duncan. To this day, I still have fond memories of the genre because of her. So when we were offered your novel, I Wish You Were Dead, for review, I jumped at the chance.

Lucy Cunningham is that girl at high school you love to hate. She’s rich, pretty, and treats anyone not worthy of her attention like dirt. But it just so happens that one of the people Lucy torments on a daily basis also blogs anonymously on the internet, listing all the wrongs Lucy’s committed against her until finally, she wishes that Lucy were dead. Not a big deal, right? Everyone does that at some point or another in their lives. Besides, it’s just the internet. You can’t take things like that seriously. Then one night, Lucy disappears without a trace.

Madison Archer is one of two people who last saw Lucy alive. She, and fellow classmate Tyler Starling, volunteer for Safe Ride and they were the ones who brought Lucy home that night. (We’ll ignore the fact that these are high school kids who can’t legally drink alcohol, making it a little strange for me to see a school organize such a service but I’ll allow that maybe this is a regional thing? I’ve known parents who organize such things but teachers?) At any rate, they broke the cardinal rule of Safe Ride: always make sure the client is inside their house before leaving. But Lucy’s steadfast refusal to enter her house until they left tested Tyler’s patience, and so they left without making sure.

Feeling responsible for her classmate’s disappearance, Madison makes her mission to find out what really happened. Things grow increasingly urgent as Lucy’s boyfriend and then Madison’s best friend disappear, inciting a panic among the student body. Madison learns there’s a connection between the people who’ve vanished but she has no idea why it would lead to their disappearance. To complicate things further, she’s also being harassed on a social networking site by someone who seems to know more about current events than they should. Or is transfer student Tyler somehow involved? Madison hopes not, but that could just be her feelings speaking since she has a crush on him. On the other hand, Tyler is a likely suspect — despite his sometimes appearing to reciprocate Madison’s feelings, he’s definitely lied to her and left her to hang. Unraveling the mystery soon becomes paramount as it becomes readily apparent that Madison is the next target.

I loved reading these kinds of novels when I was younger. They were to me what Harlequin Presents novels are to many readers among Dear Author’s readership. So reading Wish You Were Dead today is like peering through a window into the past to see a younger version of me. And while I can see the appeal of these books, I think this is one of those cases where the genre just doesn’t age well.

First of all, I thought the characterization was very flat. Wish You Were Dead relies on character archetypes to populate the storyline. There’s nothing inherently wrong with this. Many genres, if not all of them, use character archetypes in their novels at one point or another. But it’s not enough to just use them; they need to be fleshed out into three-dimensional characters. I just didn’t see that here. Lucy is the rich mean girl. Madison is her counterpart — the nice rich girl. Tyler is the mysterious, hot transfer student with a chip on his shoulder. Adam is the boy every fights over. Courtney is Madison’s party girl best friend with the absent parents. I just wasn’t able to get a grasp on any of them because they seemed so superficially drawn.

Because of this, I felt like the novel was so plot- and action-oriented at the cost of the characters. Because they didn’t feel three-dimensional to me, they read as little more than chess pieces who were moved to certain positions to suit the plot. I realize some writers, maybe most of them, consider their characters to be chess pieces to be moved to the proper squares to drive their story, but I don’t think readers should feel that way. I like getting lost in a story and that sort of awareness definitely interferes with that.

Related to this, I thought the way the turning points and plot twists unfolded were a bit random. On the other hand, many books from my youth shared this trait so that just might be a characteristic of the genre and not necessarily a fault of the novel. Girl A is dating Boy B behind C’s back. Boy D is seeking revenge on Person E for something they did to Girl F five years ago. Boy G is stalking Girl H but this has absolutely nothing to do with the plot at all and is just there to confuse you. Person E is using Girl G as a scapegoat to justify their homicidal rampage. Oh, and the reason Person E is doing all this is because they’re crazy. (I think at least half of teen suspense novels feature antagonists that use this as their primary motive.)

One thing I did like the idea of was updating the teen suspense novel to include blogging and social networking sites since they are such major presence today. On the other hand, their inclusion didn’t quite work for me because it kind of read as an adult not really understanding how the technology is used trying to appeal to a younger audience, seeming gimmicky rather than intrinsic to social interaction. This could go either way for readers, I think, but it failed for me here. C-

(affiliate link). There is no ebook format.