REVIEW: Wild on My Mind by Laurel Kerr 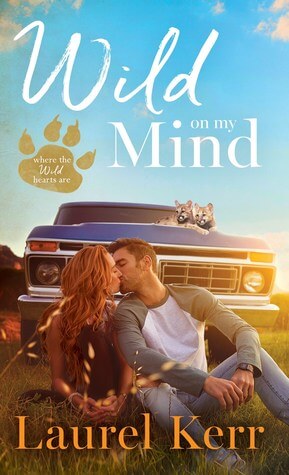 I like animals and romance so when I saw Wild on My Mind at NetGalley I requested it. Katie Underwood finds some abandoned cougar cubs and calls on the assistance of the local zoo in Sagebrush Flats to rescue them. Basically, you had me at “cougar cubs”.

Katie has returned to her hometown to help her mother look after her dad who is the chief of police and had been shot in the chest by an ex-con, currently at large. Katie’s mother wasn’t coping with the stress of it all and none of Katie’s four brothers were able to manage either so Katie quit her job (a job she didn’t like much anyway) as a marketing assistant for a mulch company in Minneapolis and came home.

She is less than impressed when the man from the zoo who comes to help with the cubs is Bowie Wilson – her high school nemesis, Or, one of them at least.

Bowie bullied Katie in high school mercilessly. At the time he was dating Sawyer Johnson, a certified mean girl and between the two of them, they made Katie’s high school experience a misery.

Bowie has changed a lot since high school. Sawyer got pregnant and did not want to be a mother so he won full custody of their daughter, Abby, and has been raising her with the help of his surrogate grandfather, Lou, at the Sagebrush Flats Zoo for the past eleven years.  He doesn’t immediately recognise Katie but when he does, he completely understands her animosity toward him. He longs to apologise but Katie isn’t all that interested in hearing it.

I appreciated that Bowie took responsibility for his actions and made no excuses. He had reasons but they did not excuse his behaviour and he never attempted to try and slide out of his accountability for what he did.

Bowie cleared his throat as guilt swirled inside him. “What you said. About high school. I just wanted to let you know that I’m sor—”

Katie’s expression turned studiously blank. “I don’t want to talk about it. Not now. Not ever.”

Bowie swallowed and gave her a nod. “Fair enough.” He wouldn’t force his apologies on her, even if it would make him feel a damn sight better. This was about her, not him. Still, he wished he could explain that he understood that he’d acted horribly. He didn’t want to excuse his behavior; he wanted to acknowledge it. But he wasn’t entitled to what he wanted. He’d hurt Katie, and the least he could do was respect her desire not to discuss the past.

Katie and Bowie are thrown together as Katie assists with bottle-feeding the cubs and also with coming up with a marketing program for the zoo, which is struggling financially. Katie is basically pushed into it by her mother, who is desperate for Katie to stay in town. She hopes work and a sexy guy (and Bowie is very sexy) might be the key to making that happen. Katie, for her part, has decided she will get some revenge of her own by using some creative marketing for the zoo at Bowie’s expense. Her first campaign will involve him kissing a red river hog, to mirror what he did to her in high school.

Katie has some good friends in town but June, her closest local friend lost significant points with me for her initial reaction to Katie’s past experience with Bowie.

Realizing that her friend wouldn’t let this go, Katie blurted out, “Fine. He pretended to date me in high school. Tricked me into kissing a pig. His real girlfriend sneaked a video of it into the morning announcements.”

“What?” June said. “You have to admit it’s kind of funny, especially after he kissed that red river hog for you.”

“June, he crushed my heart and made me the laughingstock of the school for two-and-a-half years. Even my friends didn’t want to be around me because they thought they’d be targeted next.”

The laughter left June’s face. “I had no idea it was that bad, Katie.”

It was always going to be a big ask for me to accept that Katie could have a HEA with the guy who was so horrible to her in high school. You did get me to believe he deserved a second chance and had really changed, so kudos there.

However, I found myself kind of bored throughout a lot of the book. There was a massive info-dump at the start and some really obvious foreshadowing. Some things happened in the book merely to give Bowie a chance to prove he was a hero rather than having any other purpose in the story. The transitions felt clunky and the sudden shift from starting-to-get-friendly to lovers was too sudden for me. It felt like it was time in terms of page count rather than that it had been well set up in the story.

I did enjoy Katie’s relationship with Abby however, and I did like both Katie and Bowie (notwithstanding his past behaviour). I also liked Katie’s marketing plans for the zoo which felt authentic and well-realised.

There were also some lovely word pictures which gave me a glimpse of what you’re capable of and they impressed me. Like this one for instance:

Bowie’s kiss was like a Long Island iced tea. It had started out with honeyed innocence until it grew into something dangerous to Katie’s sanity. Although she wouldn’t deny its sweetness, it swirled through her like a potent cocktail, weakening her better judgment.

Sawyer bobs up late in the book to cause trouble. I’m not a super-fan of the “evil ex” trope in general and she came across as a bit of a caricature, although I appreciate you made an attempt to give her a somewhat sympathetic backstory. Again, it was not an excuse but it showed there was some reason other than that she was just a horrible person (although she was that, too). I also am not a fan of the over-protective police officer brother abusing his authority to warn Bowie off. I can’t find it amusing or acceptable on any level I’m afraid.

Fluffy the honey badger has regular POV sections, some of which were amusing and some of which felt inconsistent and a little twee. I suspect I’d have enjoyed them more had I been generally more engaged with the book though.

I didn’t hate Wild on My Mind. But I didn’t love it either. It was kind of “meh” for the most part. I wanted to like it better than I did.