REVIEW: When all the world sleeps by Lisa Henry and J.A.Rock 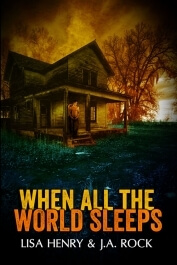 Daniel Whitlock is terrified of going to sleep. And rightly so: he sleepwalks, with no awareness or memory of his actions. Including burning down Kenny Cooper’s house — with Kenny inside it — after Kenny brutally beat him for being gay. Back in the tiny town of Logan after serving his prison sentence, Daniel isolates himself in a cabin in the woods and chains himself to his bed at night.

I know I’ve mentioned it before, but as much as I enjoy your writing, I am usually very careful with picking up your books because many of them seem to have a level of violence (sexual and otherwise) that is way above my comfort level.  I did not buy this book; I received it as one of many gifts from a generous Secret Santa at the Goodreads Christmas Gift Exchange List, and since it had been a while since I read your books, why not take a chance? I knew that the blurb suggested violence (murder, gay bashing), but it seemed like the kind of violence I could actually handle reading about (violence from a bad guy). But let me say this right away – grading this book was a pain in the neck.

It is very well written as far as I can tell, but I found the setup that gets the guys together to be so eye-roll worthy that the grade took a dive.

As the blurb tells you, Daniel Whitlock is a sleepwalker. He has been doing so all his life and during his sleepwalking he can eat, talk, and fuck (his words, not mine). Most people did not know that he was sleepwalking, even though he figured it out pretty early from what I could tell. I have to tell you more about the setup of the story, because the blurb really does not reveal much. Folks in the tiny town of Logan always considered Daniel just weird. Then Kenny Cooper hurt him very badly because Daniel had the nerve to proposition Kenny in his sleep, and then Daniel, still asleep, burned the house down with Kenny Cooper in it. Luckily for Daniel, his lawyer managed to move the trial out of Logan and the jury in the other city believed that he did what he did in his sleep and had no recollection of it. Daniel was only convicted of manslaughter and received eight months in prison.

Now he is back in Logan and most people do not understand why he is not serving a much longer sentence, and why he is alive and Kenny Cooper is dead. The vast majority of people in this town treat Daniel like absolute crap. Not all, but the *vast* majority, so whether intended or not, the reader’s impression is that this small town is a homophobic town. Again. I am just commenting on what I feel has become another tiresome cliché in m/m romances.

Why is Daniel back in Logan, rather than settling down somewhere else after serving his prison sentence? Well, he has to serve his parole there (thank goodness his parole officer is one of the few people in Logan who does not treat him like crap), but he also seems to feel that he deserves the scorn and punishment which the assholes in this town continue to dish out. No one punishes him as much as Daniel punishes himself, though. In his dreams he sees horrible nightmares – of what Kenny Cooper did to him, of fire, Kenny burning in there. As I mentioned, Daniel is afraid of going to sleep, so he chains himself to bed at night and even that does not always work; he has been known to get out of the cuffs and go wandering, and he is always scared that he will do something bad again.

I am not sure what to say about how authors handled Daniel’s sleepwalking, because I am conflicted about it. On the one hand, from a brief check of WebMD and a couple of other sites, it seemed to me that they did their research – what causes sleepwalking, what can help, what can cure (nothing) and what can make the symptoms diminish. This was all integrated nicely into the story and it did not feel like a lecture. On the other hand, it felt like when they needed to get the guys together, common sense left the narrative.

See, Daniel seemed to like dominance/submission in his sex life, and he initially seemed to have conflicted ideas about whether he wanted pain in his BDSM games. I mean, he was clear that he wanted to be hurt badly, but he also seemed to be pretty clear that he was not getting off pain, so I concluded that he was not a masochist. And eventually we hear from Daniel why he wanted pain – apparently pain exhausted him and he could sleep better and sleepwalk less when he was sufficiently exhausted. Eh, okay. But if he does not need pain in his sex life, surely he can find other ways to exhaust himself before going to sleep? In the past Daniel used to run track, so what was going through my head when this poor shmuck (because I definitely pitied him no matter how stupid he acted) was trying to find pain, pain which he did not want but thought he needed from his lover in the past and from his lover in the present? TRY RUNNING FIRST. No, really, couldn’t he start running circles around his cabin if he was understandably uncomfortable running around town? And no, he did not even say that he was uncomfortable running around town, that’s me making excuses for him.

I can also try to excuse him based on the fact that we were told several times that Daniel had not been getting enough sleep for years. Apparently in handcuffs he was sleeping three hours a night, because he put ice in the locks so it was hard to open them but then the ice would melt and he could get out of them, so he set an alarm to wake up and sometimes he could manage for another couple hours. At least I think that’s how it worked.

I can excuse the poor guy somewhat, because he was so tired he was not capable of rational thought. His constant nightmares seemed to be an obvious sign of deep psychological issues that were a result of what he went through when he was hurt and when he murdered the bastard who hurt him.  As the narrative stated at some point, his sleepwalking was not supposed to be an indication of psychological problems, but Daniel’s other problems seemed to increase because of his sleepwalking (or something to that effect – I could not find the quote).

But then, obviously in order for the story to have some kind of believable HFN ending, Daniel’s issues are played down. Seriously, I did not understand the story’s scorn at his parents, who thought he needed more help and maybe even a stay in a psychiatric clinic. I did not care for his parents, because they did not seem very helpful overall and seemed ashamed of Daniel, but were they really that far off the mark? To be fair, Daniel does start seeing a therapist during the story, but as I said it felt like he needed more than that.

Anyway, I am keeping quiet about romance because the blurb is quiet – I actually found them together to be sweet and romantic and their insecurities played nicely against their obvious attraction. The sex was hot too, very hot I would say, but even though initially I thought I could at least buy them having some sort of the happy ending, now it all feels like a bit of a mess to me.