REVIEW: Wars of the Heart by Inari Gray

When I read the blurb for Wars of the Heart, I was utterly confused. Let me explain; or better yet let me sum up the blurb, which goes something like this:

Katherine Morgan is a diplomat from Earth, she thinks that someone is out to destroy Earth’s Ozone Shield, and goes to the Peace Keeping Intergalactic Council (PKIC) for both assistance and an investigation. But the PKIC can only offer up someone else’s muscle. Of course, the muscle is King Ja-el Lamar, the guy whose heart Katherine broke a long, long time ago. So she’s told by the PKIC that she has to “force” an alliance with Ja-el or else he will lose his kingdom. Oh, and Ja-el has his own scheme. 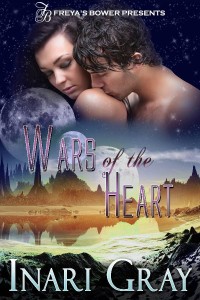 Yep. There’s a powerless council that will force a king to do something, a diplomat that is apparently in charge of Earth’s environmental well-being, and a king that is described as impetuous and at the mercy of said diplomat. You may ask why I would bother to read this after such a strange and WTF-laden blurb. Well…it’s space + romance. Let’s face it, I just can’t get enough of space and romance combined, and I’ll try anything that’s billed as SciFi Romance once. And after reading the first five pages of the book I was in serious hope that things would get better.

But before I delve into my issues with the book, let me sum up for realz:

Katherine Morgan is a diplomat for Earth, working hard at a job she’s always wanted. She’s discovered that there have been strategic attacks on Earth’s Ozone Shield, targeted at the most important loci to do the maximum amount of damage. Fearing that Earth is in danger of attack and will become a scarred wasteland, Katherine appeals to the elders of the PKIC for help. During a video conference with numerous representatives, they admit that they can offer technological assistance but the only planet that can offer true military backing is Salatiel, but it’s representative, King Ja-el Lamar, doesn’t bother to dial in to the meeting. In a twist (ok, not really), Tobias Laivir, the head of the Elder Council and Katherine’s ex-boyfriend, moves to send Katherine to Salatiel to tell Ja-el to “yield” or the PKIC will be forced to take action.

Katherine goes to Salatiel and Ja-el refuses to see her immediately. Katherine has conversations with her ex-mentor Laramie, who happens to be Ja-el’s political advisor, Ja-el’s military master and member of the PKIC Elder council, Neelam Reybak and her father who is an Elder member of the PKIC. Katherine delves into memories of her time on Salatiel for diplomat training, goes for long walks on the beach, and pretty much accomplishes nothing. There’s a lot of what is supposed to pass for political maneuvering; Ja-el makes Katherine wait to see him and Katherine makes noise to the PKIC, but it just reads as two kids sniping at each other. Ja-el is also…er…enjoying the benefits of a princess of a neighboring planet. She’s none to thrilled that Ja-el is unable to give her his heart, or any sort of emotion whatsoever. But apparently they are having some hawt sex.

The plot…er, I should say, the Ozone Shield plot, becomes more confusing with different twists added. There seems to be some weird things going on, but no one shares information with each other. As I read the book I realized that a lot of clues were thrown out, but nothing was tied together in a way that made complete sense. In addition, everyone on Salatiel is operating in their own little bubble, existing on bitter feelings and reliving glory days, none of which move the plot or the romance forward. The lack of communication between the characters means you have one giant clusterfuck of a who-did-what-to-whom-and-why storyline. On the romance side, the heat between Katherine and Ja-el is nonexistent. There seems to be more going on below the belt and mentally with Ja-el’s princess paramour. The Katherine/Ja-el romance is flat and uninspiring and there are times when it feels like I’m reading about to bratty teenagers rather than a king and a diplomat.

But my real issues with the book are Katherine and Ja-el. She met Ja-el and they fell in…something when she was sixteen. Oy. I couldn’t wrap my head around that, or the fact that yep…Ja-el “did” something to her to tie them together forever back when they were in “training”. Two: the writing was so…out there with descriptions that I had a hard time imagining what people were really thinking or feeling. Take a gander:

In the center of the screen, eyes brighter than glowing amethysts stared at her intently. Exasperation showed in the constricted brows that towered above them. Katherine looked at the man they belonged to, a vision of fairytale-like beauty with striking features and wispy sandy brown hair. Behind the mask of his attractiveness, his violet stare was cold as stone.

Her tongue felt thick, too heavy to form coherent words. “I was just about to go find you.” He didn’t respond. He simply stared, deathly silent, unnerving. She fought the urge to recoil. His eyes pierced hers as though they saw a web of lies beneath the surface of her skin. Honesty, she reminded herself, though the urge to lie came more naturally. “There’s something I really wanted to discuss with you,” she said, when the silence stretched to an uncomfortable level.

I would have thought the piercing of her eyes was more uncomfortable than the silence.

Finally, Katherine neither acts nor thinks like a diplomat, a grown woman, or someone who is in a position of authority. Ja-el neither acts nor thinks like a king, a mature man (ok, that might be an oxymoron, but nonetheless…), or again, someone in a position of power. There’s zero strategy from Katherine and a bit more than a thimbleful from Ja-el. I plowed through this one, but unless you’ve got a hard on for space-based romance like I do, I wouldn’t bother. C-

Since anything else might veer into spoiler territory, I’ll refrain from saying more about the plot.