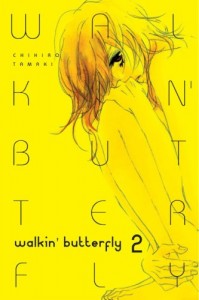 I recently reviewed the first volume of this josei manga series about Michiko, a young woman who’s self-conscious about her height and decides to become a model to overcome it and break out of her stagnation. Though I found the initial volume to be shorter than expected, I was intrigued by her rough personality and desire to reinvent herself so I picked up the next installment. Now I’m wondering if perhaps my enthusiasm got the best of me.

After the events of volume 1, Michiko has joined a small modeling agency — small in the sense that she is the only client — operated by an alcoholic, former runway model. She has a lot to learn. Modeling is more than just standing there and looking pretty, something she should have guessed considering the public humiliation that led her on this path in the first place. She has to learn how to walk in heels — a tricky skill that many people overlook. A runway walk is nothing like walking down the street. She also has to learn how to pose to show off clothes to maximum effect. In short, she has to learn how to be the type of model designers and runway directors will want to hire.

Unfortunately, Michiko is impatient and stubborn. While she realizes that she needs these skills, she can’t get over her desire to get revenge on Mihara, the designer who embarrassed her. So even though it takes time to become the type of high caliber model to do so, she wants to rush things and get things done now. Hardly a recipe for success.

This was a frustrating volume to read. Ironically, the traits that make me like Michiko as a character — her rough and brusque personality — are also what made me dislike this current point in the narrative. Michiko goes to auditions and go-sees and even occasionally gets a job (like modeling clothes for a print catalog) but she doesn’t approach these for the learning experiences they are. Instead she considers them wastes of time and obstacles to her ultimate goal.

While completely in-character for her, it makes Michiko unlikeable. In volume 1, she hates her body and is uncomfortable in her own skin. But modeling is all about being comfortable in your skin and knowing how to display that body — and anything on it — to its best. How does she expect to reach her goal of being a supermodel if she doesn’t stop to reconcile those two things? She doesn’t practice walking. She doesn’t bother to learn how to pose her body. She’s run into other models at auditions and clearly seen the difference between their abilities and hers, so it’s tough to see her not make the connection.

Michiko’s mishaps in this volume are briefly interrupted by a look at Mihara, the fashion designer. It offered a little backstory into his character; to no one’s surprise, his family thinks his occupation is ridiculous and hopes he’ll come back to the family medical practice. He’s also given the chance to become part of a larger fashion house, but at the expense of his own vision. It’s interesting to see the mirror of his refusing to compromise and going after what he wanted with Michiko’s desire to reach a goal. I think this is mostly why I wish Michiko had better self-awareness about her situation.

Even though I enjoyed the first volume of this series, I found volume 2 to be less enjoyable. Not quite enough to be put off the series — something happens at the end that I hope spurs Michiko on — but I’m no longer so charmed by it. While I love rough and difficult characters, I dislike it when they’re also obstinate and unwilling to put in the work they need to, especially when it comes to achieving highly competitive goals. C-