I knew this book was a companion novel going in, and it did a solid job of standing alone – at least when it came to referencing the previous story. A friends-to-lovers premise and a Texan setting made this story sound like it could be something different for me; both contributed to some unique parts of the story, yet I found myself getting tired of some of the things you were trying to do. Stories about men finding their sexualities are relevant, but I honestly am too worn out by coming out plots to care about reading it again in an m/m novel, even if it’s done pretty well. That was my biggest problem with Waiting for Ty. 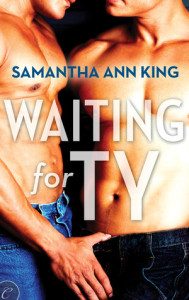 A political reporter known for his talents in the field, Tyler Coil has one secret that he’s kept under wraps for the last few years: he’s in love with his best friend, Landon. Landon works as a cancer researcher in Texas, and he frequently entertains Ty in his bachelor-pad style apartment with a few rounds of beer. They watch sports together and Ty talks; Landon listens and adds in his two cents every now and again. Landon and Ty feel comfortable with each other. Ty just thinks that it would be impossible for Landon to love him as a lover, not just as a friend.

One night changes everything when Landon, who harbors his own secret affections, and Ty take a leap of faith and kiss. Kissing leads to sex, sex leads to the morning after, and the morning after leads to the two best friends admitting that their feelings run deep for each other. Ty and Landon are irrevocably in love with one another. Acknowledging that should be the end of it, shouldn’t it?

Both men harbor worries about what it could mean to come out. They technically identify as bisexual, but their attraction to one another is just far stronger than their physical attraction to women in general. Ty fears that being bisexual could lead to less reporting jobs with Texas being as conservative as it is; Ty’s family also presents an issue, the general group a little too traditional and closed-minded to accept something like being bisexual. Landon has his professional worries, too, but he’s just as concerned about Ty and the distance created by Ty’s concerns. Their relationship may not be able to stand so much worry, especially when the men are faced with the chances to take jobs that would separate them for a long period of time. Their love might not be strong enough to withstand the pressure of revealing who they really are to the rest of the world.

From the get-go, I felt like the story was disjointed. The characters have sex very early on, presumably because both harbor feelings for each other and have major man horny-ness upon realizing that those feelings are reciprocated. I felt like this happened a little too early considering that said men were dealing with a four-year friendship and were both paralyzed to so much as hint at their affections, yet immediately dove in physically after the ice was broken. I could see where you were coming from with the building of the sexual tension prior to the novella’s opening, so that was something I could at least logically understand even if I felt it was overly impulsive. The downside? The entire book read this way – like the characters were ready to be together, proved it to the reader, and then backtracked the relationship later on.

A lot of this is because of the way the coming out plotlines are handled. Ty’s family is very ‘traditional’ and prejudiced, but I think you did that well and showed just how painful it is to be from a family like that. I could see members of my family doing that, or families that live in my area, and the characterization rang true on a human level because of that. It made Ty’s worries about coming out more believable because his family was indeed a major problem that would stick with his character even after he fell in love with Landon. If that had been the main point of the coming out story and another conflict was more of the focus, I think the novella would have been much better, but that sadly wasn’t the case.

Ty and Landon both frequently cite professional worries for coming out. Maybe this is just a Texas thing, maybe LGBTQ people have an extremely hard time with professionalism there compared to some other states, but neither of these men hold jobs that, to me, felt jeopardized by their sexualities. Landon does scientific research; Ty is a reporter. They constantly say that it would be a major problem, yet it feels like a recycled excuse in order to add in extra conflict to the story. There are many successful LGBTQ reporters and scientists – and print reporters usually don’t have as much personal exposure with their pieces because of the veil of the printed word. As worrisome as it is to be LGBTQ in a professional setting, always facing the potential of a homophobic higher-up or coworker, it’s not something that would kill either of those careers, especially with established professionals, and I don’t think the author made the reasoning behind the worry clear enough to be as deep of a conflict as it was.

I think the characters themselves had good chemistry. The sex was hot, if occasionally awkward in the vocabulary used, and their dialogue worked well for me. Landon’s sisters were amusing, meddlesome types that accepted him quickly, and one of Landon’s neighbors also won me over with her protectiveness. That kind of trope is always cute to me, and each of the girls had a different personality. Your characters are endearing and make the story pop when it would otherwise feel like a boring re-tread of countless other contemporary m/m romances. Your characters clearly belonged together. I believed the HEA whole-heartedly, and I think the fact that these two had such history made that easy to stomach despite the short length of the story. The occasional bits of humor also helped to keep the tone from being too serious with all of the angst.

While Waiting for Ty had good writing and a fair shot at being a great novella, the romance just lacked conflict that felt organic to the relationship at hand. Landon and Ty needed more than worry about their sexuality in a professional setting for me to sympathize with them, if only because they never seemed to think about it or the reality of how relevant them being bisexual would be to a job that has nothing to do with the practitioner’s sexuality. It’s just something that’s been done before and done with more motivation behind all of the coming out angst. My final grade is a C-.