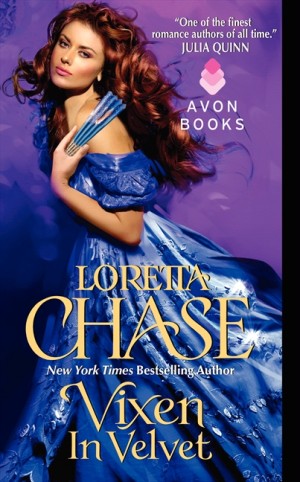 When I received the ARC to Vixen in Velvet, I was enormously not cool about it. I nearly choked when I saw the file in my inbox. I immediately downloaded it, flipped through the first few pages, which I’d already read on your website, and reached the new material. Evil glee filled my heart, I promise you. You are an auto-buy author for me. I have read fourteen of your novels before this one. The Carsington Brothers series is one of my favorite romance series. Peregrine and Olivia of Lord Perfect (and subsequently, Last Night’s Scandal) are the best children in any romance ever. If anyone says otherwise, I’ll kick them in the shin.

So if we’re done with curtseying and all the niceties, I’d like to move right into the thick of it: I didn’t like this book.

I tried to like it, because in parts, it was charming and full of witty lines and a few characters who were at turns hilarious and endearing. However, I was distracted by the superior secondary characters, who were more dynamic than both the leads, about whom the entire book was devoted. If this had been the Lady Gladys and Lord Swanton chronicles, I would have probably adored it. Instead, I had to suffer two-dimensional Lisburne, otherwise known repeatedly as the Roman god, and his annoying fixation on Leonie.

He wagers with her that she cannot turn his ugly duckling cousin, Lady Gladys, into a swan. His prize is two weeks of her time. He kisses her, making it clear the two weeks would involve lots of that. Essentially, to be his mistress for two weeks, though he claims he just wants to spend time with her and be her top priority instead of her business. And worst of all, he assumes she’s not a virgin, though she’s said she’s not experienced, and it’s a simple matter to ask, “How not experienced?” I’m never impressed with the old ‘she can’t possibly be a virgin’ device.

I don’t understand why Leonie would agree to this bet. Even if she thinks she’s going to win, would she seriously wager her own virginity on a silly bet? I’m all for historical romances that embrace female sexuality and present a heroine unafraid of her body and longings—in fact, it’s one thing I love about your novels—but that doesn’t mean I respect a heroine willing to wager her body on a bet, whether she’s a virgin or not.

Another contention is the utter lack of chemistry I felt between Leonie and Lisburne for half the book. Your characters’ chemistry usually burns through the pages. This time, I didn’t even do a cheating search to see where in the book the first sex scene would be (I find searching for “thrust” to be most useful) so I could readily anticipate the scene. I just didn’t care. They kissed for the first time, and my reaction was, “…?” I saw the words, most luscious and delectable words, but I didn’t feel them.

Maybe I’m overly critical of Lisburne, who is a Roman god, did you know? I did, because you mentioned it sixteen times. I counted. I don’t find anything to value about Lisburne besides his love for his family. And even then, he has no sense of how hurtful he is to Lady Gladys. He’s constructed a whole bet around his conviction that she will fail to attract suitors even with the right guidance and clothes. He’s downright rude about her incompetence to attract anyone. How can I fall in love with a man who is essentially bullying his cousin, a charming lady who is insecure? Whose side should I be on, do you think?

Shall I overlook all this because he beat up some bullies who were picking on his other cousin, Lord Swanton, twenty years ago? Because his eyes get teary at a workshop for indigent females? I’m trying to think of one more thing he’s done that’s at all likable and drawing a blank.

Well, once he made Leonie a sandwich after she had a bad day, and that was very nice, but that’s about all. She reacted to the sandwich-making as though God himself had come down from the heavens and made her a sandwich, and she [spoiler]immediately fell in love and surrendered her virginity.[/spoiler] My primary reaction: it must have been a very good sandwich. But besides making me hungry and lamenting my lack of bread, cheese, etc. in my kitchen, I wasn’t much affected.

Lady Gladys is a lovely character, very different from Leonie. She has almost no confidence, except in the utter conviction that she’s a failure in the marriage market. She is intelligent, and she reacts to her failure with anger and biting comments. Leonie sees the vulnerability, praises her good qualities, and works the proverbial magic to which we’re accustomed in an ugly duckling subplot.

I loved, flat-out loved, Lord Swanton. He was London’s favorite new poet, and his rise to popularity was fast. The only problem: his poems were sentimental tripe. Even he didn’t think much of them. He laughed off reviews that roasted him and at times, agreed with them. He was also excessively emotional and sentimental, choking up at the slightest prompting.

Swanton blinked hard, but that trick rarely worked for him. Emotion won, nine times out of ten, and this wasn’t the tenth time. His Adam’s apple went up and down and his eyes filled.

One of the subplots was a conspiracy with the bullies who used to torment Swanton. This didn’t interest me in the slightest. There’s no reason given for these bullies to hate Swanton his entire life, after puberty ended and people theoretically grew up, so they were cardboard to me.

Nothing stood out for me besides the characters Lady Gladys and Lord Swanton. It’s hard for anything to stand out when you keep over-using narrative to declare things are so, rather than showing me the story and letting me draw my own conclusions. For instance, to insist how witty Leonie was as she captivated the audience, when the words provided nothing specific and tangible to help me believe that claim:

Not that Swanton could hold a candle to Leonie Noirot’s performance, in Lisburne’s opinion—and no doubt the opinions of all the other gentlemen in the audience. Following the devastating curtsey and smile, she had launched into her short, shockingly effective appeal, telling the audience at the outset that she knew they hadn’t come to hear her but Lord Swanton. Yet her five-minute speech had her listeners laughing and weeping by turns. Lisburne had even seen that cynic Crawford brush a tear from his eye.

I’m supposed to take your word on it, that the speech was hilarious and moving? Show me something hilarious and moving. Without specifics, it’s just cutting corners and robbing me of emotional payoff. I felt like the majority of the book’s interesting parts were either merely implied or happened off-stage and summarized later, and how can I emotionally connect to something that I don’t experience myself?

Lisburne’s valet was mentioned multiple times to great effect, and I would have loved to meet him, but in the few scenes he actually appeared, he said nothing and was described passively. That devalues everything awesome claimed about him when he’s not there, because he doesn’t deliver the goods himself. And a whole romantic subplot with secondary characters took place off-stage, when it would have been so satisfying to see them interact in any way at all before the epilogue.

I couldn’t understand why anyone loved each other, why they would fight for each other. No matter how much I tried, even as the book continued and I found myself not disliking the hero as much as previously (but not outright liking him), I couldn’t grasp the connection between hero and heroine. “He’s a beautiful Roman god and I love him; he made me a sandwich” is not the answer. Everything was superficial and predictable. Nothing dug deeply, and therefore, nothing reached me.