I confess, I picked this book up, expecting to put it down after a few pages, since I realized that this was the third book in a series, but the voice of Nyx Ianira just sucked me in. Unfortunately, that was the only thing that kept me reading. 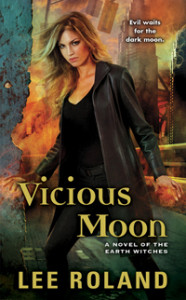 Despite an idyllic-sounding childhood growing up in the swamps of southern Georgia, Nyx has spent the early years of her adult life cut off from the rest of her witch family. Rather than bowing to pressure from her coven to get married and start making witch babies, her Nyx’s response is to run away from home, join the army and spend ten years fighting in the world’s most brutal spots. When three Sisters of Justice who are basically the witch executioners, show up, Nyx runs, only to be taken rather easily by them. To her surprise, they dump her at her kindly old grandmother’s home. Apparently Nyx isn’t a “great communicator” having spent the last decade without any contact with her family, which is why her grandmother had them bring Nyx home to have a chat.

One would think that Nyx’s lovely grandmother would be at least a little peeved about having to send an execution squad in order to spend some time with her granddaughter, but no. Grandmother just welcomes Nyx, and sends her on a mission to find Nyx’s missing sister, Marisol. Nyx, despite painting her sister as the perfect witch in contrast to her own, self-described magical incompetence, immediately accedes to her grandmother’s request. As a bit of a Mary Sue-heroine, there is no hesitation on Nyx’s part, no jealousy that her grandmother didn’t set out to find Nyx when she disappeared years ago. And that’s the problem with this book; there’s little emotional nuance unless it is directly related to the plot.

Moreover, I found most of the characters to feel rather flat, except for the evil ones who are kind of ambiguously-evil-possibly-misunderstood-in-a-way-that-potentially-sets-them-up-to-be-protagonists-of-future-novels. In particular, I found Etienne, the hero to be a very generic version of the tall handsome tortured mercenary hero. As head of the captured demon Aiako’s army (who is bound by the Earth Mother to a derelict part of downtown Duivel, Missouri near a dimensional portal), Etienne is the foe-turned eventual lover. He’s got a serious thing against witches, having been enslaved by an evil one for years and to say he doesn’t trust Nyx is an understatement. Yet still, Etienne’s caveman overprotective instincts come out, despite the fact that Nyx is supposed to be just as much of a hardcore merc as he is. In fact, Etienne’s second in command, a dude by the name of Darrow is one of Nyx’s former comrades. Darrow is the generic mandatory-friend-who-gives-relationship-advice-and-by-which-we-learn-backstory. Since Darrow supposedly has had some death defying adventures with Nyx, Etienne’s determination to keep Nyx safe by installing her at their base not only undercuts Nyx’s alleged abilities, making her feel more like a Mary Sue, but feels like a forced plot point to ensure the two interact.

In addition towards the end, secrets are revealed in a way that I think should be rather unforgivable, considering the way that the characters were depicted. Etienne is described as a survivor of demon torture and fears only one thing: being enslaved by a witch again. In order to save their lives, Nyx does what Etienne fears most without any explanation. I didn’t understand why Nyx didn’t explain what she would be doing but I feel like the scene as it was depicted could have allowed time for explanation, making her come off as particularly insensitive. Of course, maybe Nyx was making up for the fact that the Etienne knowingly possessed knowledge that could have helped Nyx with her search for her sister and never gave it to her until it was too late. But that makes him much less of the kind of hero I want to read about.

Other issues I had was that as the novel progresses, Nyx transforms more and more into a Mary Sue, accessing powers she never had before and discovering more about her unique and powerful heritage. This kind of character progression is rather classic but what makes this rather ho-hum is that she seems to suffer few consequences.

The best part of this book, and pretty much the only thing that kept me going was the voice. Nyx was like Charlaine Harris’s Sookie Stackhouse version of Ilona Andrews’s Kate Daniels; deadly competent in terms of combat but kind of clueless otherwise. I only wish the story and the characters had been better.