REVIEW: Under His Influence by Justine Elyot

I passed this book over several times on NetGalley because the blurb seemed to imply a two girl one guy menage.  I am not usually a fan of those but curiosity got the better of me. I figured that access to a free copy should be utilized to try books that I might not otherwise take a chance on if I had to spend the money.  This book, however, isn’t a romance.  If anything it is a horror book with sex and since I have never reviewed a horror book and read even fewer, I don’t know whether this is a good horror book or a bad one.  From a romance reader’s point of view, it was a bizarre story with a cliffhanger ending and a sad depiction of women.  Perhaps the next book, the women rise up? I don’t know. 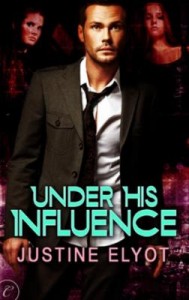 It’s hard to review this book because much of the details are surprise so I’m going to be intentionally vague.  There are three main characters in this story with two important secondary characters.  Anna Rice falls for a charming and wealthy man, John Stone.  She becomes completely under his control. She quits her job. She acquiesces to his sexual demands but she is very happy.  She is even happier when she becomes pregnant.  In some ways, I wondered if this was supposed to be a satire of Harlequin Presents or, at least, a pointed jab.

Mimi Leblanc is billed as Anna’s best friend but she doesn’t really act like it.  While she questions Anna’s near instant devotion to John, particularly when John makes noises that he’d like to add Mimi to his harem of women, Mimi succumbs to John’s advances as well.

I think the problem that I had was the quickness in which everything took place. Anna falls for John immediately and is swiftly captured by him, moving in with him and then marrying him.  Mimi puts up only a token resistance and perhaps her weak resistance can be blamed on something out of her control; yet, because the women were so weak in this story, such easy prey, it lacked power in the telling.  Perhaps if there was more time between Mimi trying to protect Anna and Mimi wrestling her clothes off, I would have sympathized more.

John is no hero.  If anything he is villainous. (Is this a spoiler? I don’t even know!)  He intends to use both women for a nefarious purpose yet, even knowing this, they both seem to love him.  Mimi’s is a reluctant love, however.

I don’t know much more to say other than I don’t really understand the point of the story.  Was it that all really hot, rich men are evil?  Was it that women are nothing but vessels?  I felt sad and confused by the story but I wasn’t really scared. I was horrified at the women and perhaps that was the point? That women in harlequin presents romances are nothing more than spineless wimps whose sole purpose is to be the fruit bearing wombs for men?