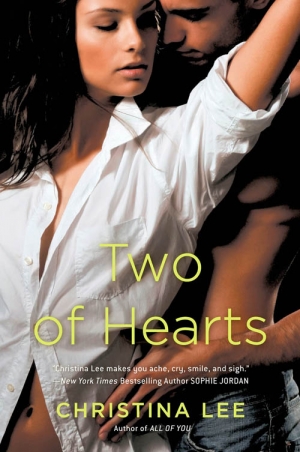 I’ve generally been a fan of your new adult series, even though I had mixed feelings about the last book. But my goodwill toward your works was enough to encourage me to check out your first foray into adult romance. Set in the same continuity as your new adult series, Two of Hearts introduces us to some familiar characters, albeit a few years later. As an aside, it proves some of my assumptions made about the last book incorrect. That should be a good thing, but it actually confuses me even more about how that novel was structured and plotted. (Any other readers have that happen to them?)

We first met Dakota and Shane in Whisper to Me, which is about Dakota’s younger brother, Kai. In that book, we watched Dakota and Shane dance around their attraction to each other. At the start of Two of Hearts, we learn that they acted on those feelings but it didn’t work out, and they split up with many unresolved feelings.

A supposedly senseless tragedy changes everything. The funeral of Dakota’s father brings Shane back to town, and the mystery behind her father’s death keeps him there. Dakota’s father was killed during a parking lot mugging. It seems like a random act of violence, but there’s a lot of contention surrounding the casino he left behind. He left it to his wife, but she’s Dutch, which many members of the Native American community don’t trust. She’s not Native American, so how will they she’ll respect their beliefs and customs, now that her husband’s dead?

Dakota was practically raised to take over the casino after her parents. Even though she’s always identified as Native American, her half-Dutch heritage puts her on shaky ground. Add to this a rival casino owner wanting to buy them out, and the idea of a mugging grows less and less likely. Conveniently, the situation gives Dakota and Shane an opportunity to work through those unresolved feelings. Maybe a second chance will rekindle their relationship.

I’m not sure how I feel about this turn your writing has taken. I actually like suspense, but the incorporation of the suspense elements don’t seem to work for me here. Since I had a similar reaction to There You Stand, I think it’s due to a reader-writer mismatch. I do think this novel blends the two genres better than the other one, but it still fell flat.

The relationship between Dakota and Shane also frustrated me. When you get down to it, the problem their relationship floundered the first time around is because they don’t know how to communicate. And while I think it is believable given their characterization, I’m over romances in which the main conflict comes from a failure to have a heart-to-heart conversation. It doesn’t inspire confidence that they won’t run into this problem again later down the road.

I was also a little unimpressed by Shane. I get it. He’s still in love with Dakota. But her father just died. People are turning on her and her mother. Her family’s being pressured to sell their casino. Maybe there’s a reason why she can’t focus on your failed relationship together? I’m glad he acknowledged that it’s awful timing, but maybe he should also acknowledge that his pushing her at that moment is insensitive as well. A little selfish, right?

I also really disliked the bits where people told Dakota that if Shane had to leave after all this was over (he’s a U.S. marshal), she should seriously consider going with him. While I admire the idea that if you follow your heart, everything falls into place, that’s just a little too naïve for my tastes. Because love is not enough, and the book makes a point to tell us multiple times that Dakota was prepared by her parents to take over the casino eventually. Why should she give all that up? Besides, the entire external plot of this book hinges on Dakota and her mother fighting for the right to run the family casino. If Dakota leaves because Shane isn’t going to stay, who’s going to run the casino after her mother? Her brother has no interest in running it. What’s the point of fighting so hard to keep it, if you’re just going to hand it off to someone else at some point?

The resolution of the casino plotline was too obvious and neat. It veered into cartoony villain territory for me, to be honest. I also wasn’t satisfied by the race relations, but I can’t put my finger on why. I’m not Native American, but some exchanges struck me as off at times.

I really wanted to like this book. I was hoping it’d rekindle my affection for your writing after my ambivalence with There You Stand. But it didn’t, and given that the direction your novels seem to be going in, I think this might be where we part ways. C-