Once upon a time, I was an avid reader of your novels. From the categories, which I discovered deep in the bowels of my university’s library, to the single title romantic suspense novels, which I purchased for years. 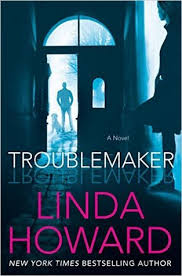 Around about the early 2000s, that started to change and I gradually became a more and more sporadic reader of your books. Until I picked up your latest, Troublemaker, I had not read one of them since Death Angel, which came out in 2008.

I decided to try Troublemaker because of a conversation two of my friends had about the book. One of them enjoyed it, and thought it had flashes of your old writing, while the other was disappointed. I wanted to see which camp I would fall into.

Troublemaker begins thirty-six hours after Morgan Yancy arrives home at his condo after a mission abroad. Morgan is a member of a GO-Team, some kind of paramilitary operatives whose missions are “highly classified and extremely sensitive politically.”

Morgan is currently on downtime so after he wakes up and has some coffee, he decides to go fishing. He calls a teammate, Kodak, who declines to join him, goes to the marina and says hi to its owner, who makes a phone call soon afterward, and once on the water, runs into a congresswoman and her husband in their motorboat. When he gets home, Morgan spots a shooter and manages to take him out but not before he is shot.

Morgan has open heart surgery and gets pneumonia. He is in a much weakened condition when his boss, Axel MacNamara, interviews him and they try to figure out why anyone in the U.S. would target Morgan, but they can’t. Axel then decides to send Morgan to a woman who was once, long-ago, briefly, Axel’s stepsister, until their parents divorced almost as quickly as they had married.

Isabeau “Bo” Maran is now the police chief of Hamrickville, a small town in West Virginia, a position which is purely administrative. Bo has not heard from Axel in years and she’s thrilled about it because they couldn’t stand each other. So when she finds a note from Axel in her mailbox wishing her happy birthday and expressing the hope that she’ll enjoy her “gift,” she is seriously annoyed.

Arriving home in her driveway with her dog Tricks, Bo finds an SUV parked there ahead of her. In the driver’s seat of the SUV is Morgan, clearly in poor health, and he explains to her that Axel has sent him to her to recuperate at her house, just like that.

Well, maybe not entirely just like that – Axel soon calls and offers Bo $150,000 if she’ll agree to take Morgan, and since she has some debt, she does – but she’s still unhappy about it. So Bo and Morgan get off on the wrong foot, especially since he doesn’t immediately respect how gifted Bo’s dog, Tricks, is.

Tricks, the dog, is something of a genius for a dog, able to understand a lot of human vocabulary and perform feats other dogs can’t. She’s also a very pretty dog, and extremely sociable and friendly, beloved by almost everyone in Hamrickville.

Tricks is stubborn, too, as Morgan learns the hard way when he accidentally takes her seat in Bo’s car. Gradually, as Morgan gets better, Bo and her dog, as well as the town of Hamrickville, begin to worm their way into his heart. Likewise, over meals of beer and spaghetti, Bo, who is naturally standoffish and guarded, nonetheless comes around to liking Morgan.

Meanwhile, a divorcing couple in Hamrickville get into a dispute that turns physical, and Bo and her deputy, Jesse, charge to the rescue. The husband of the divorcing couple, Kyle Gooding, is also the scion of the town mill’s owner, which leads to a headache for the town and eventually, to a threat against Bo.

Of course, there’s also the question of who it is who was behind the attempt on Morgan’s life, and why, still hanging out there. And even if Morgan can remember what he might have seen or done that put his life in danger, can Bo, who has never had anyone in her life stay put, bear to watch him leave on his next GO-Team mission?

As I mentioned before, I haven’t read one of your newer books since Death Angel, so I can’t speak to any changes in your oeuvre in the intervening years. Even though Death Angel wasn’t a favorite of mine among your books, I thought it felt much stronger and more confident than this book does.

For one thing, the suspense plot here feels weak. It doesn’t make sense that, with GO-Team missions so politically sensitive, Axel would send a barely-alive Morgan to Bo with no warning, when he hasn’t seen Bo in years but knows she hates his guts.

Also, when the long-awaited confrontation with the villain finally takes place, that villain isn’t even well-prepared.

As Jia says, every novel gets one gimme. But this one has more than one. Morgan, for example, once he recovers, is capable of doing thousands of sit ups. Nor does supposedly 31 year old Morgan feel like a man of his generation, with his thoughts about how he would lose his man card if he didn’t go fishing, or about how certain foods aren’t masculine enough.

Then there is the genius dog, Tricks. My two friends disagreed about the book, but were in agreement about one thing: this was one irritating dog. After thinking about it, I realized why that was the case (Yes, I too found her annoying).

First, the dog doesn’t behave like most dogs. Morgan can tell her to put the ball in his hand and she does it, over and over and over. Later, when Miss Doris, the town’s baker, bakes dog treats for Tricks and some human almost eats them, Bo, the heroine, worries that it will upset the dog if someone tries to eat something that was made for her. These are just two examples out of many.

Second, and worse, Tricks is a Mary Sue character. It’s the first time I’ve come across an animal character that was a Mary Sue, but I can’t deny her Mary Sue nature.

Mary Sue characters are wish fulfillment characters. Not only are they good at everything — smart, attractive, and possessing of unusual skills and abilities, but other characters all either adore them or loathe them, with no in between, and those who hate them are usually the villains. All of this is true of Tricks.

Later in the book, the teenagers of Hamrickville high school beg for the dog to be in their parade float, and there is even an assassination attempt on the dog.

Third and finally, Tricks was also annoying because she got so much page time that she was almost a protagonist in the book. Thus, she took up word count that could have been spent developing the human characters and their relationship.

I will add one last caveat about the dog, and that may seem contradictory to all that I just said. I think that if one took this dog out of the book, there wouldn’t be much book. Other than their relationship to this dog, there’s little that stands out about Morgan or Bo compared to earlier Linda Howard protagonists; in fact they kind of pale next to them. So the dog was needed, annoying as she is.

The romance takes a while to get off the ground, since Morgan and Bo don’t meet until about 12% of the way into the book. Even once it gets underway, it feels watered down with details, some of which are relevant to the story but many of which are not. For example, there’s this:

Straightening, she washed her hands and got a pizza pan out of the cabinet, then extracted a large frozen pizza from the freezer. “It’s a supreme. Want me to pick anything off before it cooks?”

“No, I like it all.” Except for anchovies. He’d tried them, though in his opinion whoever had come up with the idea of a fish pizza should be taken out and shot. Some things just shouldn’t be.

The oven beeped, signaling that it was hot, and she slid the pizza pan into it.

This is a lot of detail about a pizza that doesn’t affect the plot, the character’s relationships, or matter to their emotions in any significant way.  It wasn’t the only example of this sort of thing.

What I did enjoy about the book was what I enjoy about many of your books – the heroine’s emotional vulnerability, her fears about falling for the hero.

This is something I think you do far better than most, and although here it felt a little muted compared with some of your earlier books, I still enjoyed it enough to turn the pages from the point Bo and Morgan meet until, at around 80% of the way through the book, this emotional conflict was resolved.

To be honest, I almost quit the book a little after that 80% mark, mainly because of the Mary Sue dog, and also because the romantic conflict had been resolved.

Eventually I picked it back up, though, and I found the last 11%, which is where the suspenseful part of the story and the HEA took place, very readable. It wasn’t enough to make up for the weaknesses in the book, but I was glad I finished. C-.