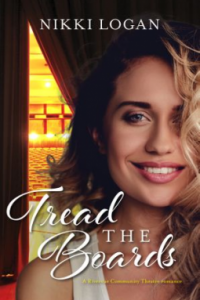 He’s the Banksy of the international theatre scene – daring, anonymous, renowned. So when playwright ‘Draven’ bequeaths his latest play to the rural Rivervue Theatre, the stage is set for drama.

Props-maven Mackenzie Russell is no fan of the Larrikin, the subject of Draven’s new play. But she is a big supporter of her hometown, Brachen, where the guy is a local legend. She would no more let Brachen’s reputation be trashed than she would pull on a costume and perform in Draven’s latest masterpiece. Her secret stage aspirations are strictly private.

But someone needs to tell that to Dylan North, the enigmatic loner sleeping rough in Rivervue Theatre’s fire-escape, after he catches her running lines in the props room.

Dylan just wants to keep a low profile; he knows that his rough appearance and poor language skills make people uncomfortable. Except Kenzie – with her, Dylan feels more at ease than he’s ever been before and he’s fast becoming her biggest fan. In more ways than one.

But theatres are founded on drama and this one is packed full of secrets. Hers. His. The Larrikin’s. Draven’s. Secrets that if revealed could tear the town, the theatre – and Dylan and Kenzie – apart.

I’m not that knowledgeable about theater but I have heard of the artist Banksy. The blurb for “Tread the Boards” sounded intriguing by sort of combining the two. Unfortunately, the end result wasn’t as captivating as I’m sure the book’s theater crew would wish their production to be.

Kenzie Russell seems to live for the theater in her small town. Though she works in a veterinarian’s office, she loves being in charge of the props used in the productions. One day, something odd appears and she takes charge of delivering it to the manager. Turns out it is a play by the mysterious, internationally renowned playwright “Draven” who delivers newly written plays that focus on something meaningful to small theaters like Rivervue. Staging them will draw attention to these struggling groups. Turns out the script focuses on a local boy made good in post World War II Hollywood. But when Ron de Vue left Australia and never came back, he left some shattered lives behind.

There are things I liked about this book but a lot that didn’t work for me. The blurb promises secrets and yes, those secrets are all over the place. But instead of drawing me in and making me more interested in finding out about them, they only annoyed me. Both of them I guessed fairly quickly.

Kenzie loves the theater. At times it seems she’s obsessed with it and lives for the productions. I think yearning is what was supposed to be the overriding emotion but “puppy eyes pathetic” is how it came across. She also pushes her way into the life of the drifter she discovers behind the theater. Does she know this man? No but she’s ready to make contact, be alone with him, offer to let him stay in her house even. He’s got a dog she likes but just having a dog doesn’t make him automatically okay.

Dylan has overcome mutism due to a horrible event in his past. True he owes Kenzie and stage manager Lexi no explanations but as he watches them turn themselves inside out to try and be sensitive in their belief that he’s deaf, even he thinks he should have revealed the truth way before he does. Instead he doesn’t and lets them potentially say things and reveal things that they might not have wanted him to hear. It’s not that they really do say anything embarrassing but they might have. Then once she realizes what happened to him and how it affected him, Kenzie leaps to shield him from a local asshole. It comes off as patronizing.

Dylan has a traumatic past but he tells Kenzie that when he was growing up, he was allowed to be himself and wasn’t forced out of situations in which he felt safe. Yet he makes the decision to out Kenzie without her knowledge or agreement because “it’s for her own good.” Then another secret is revealed that he knows will affect her due to what he’s done and he says nothing to her. He feels like a dick but he still says nothing. Yes, I know this is a standard trope in romance novels and used to set up later conflict but this is twice that Dylan disappoints me.

I have no idea if the theater stuff is correct or not but since I don’t know much about it, I’m fine with it. Only I didn’t find it that interesting and had to force myself to keep reading about the nitty gritty details of staging a play. The story has quite a few instances when heightened conflicts are set up that either are never shown or fizzle. I’m thinking I’m going to see Drama! and Fireworks! then with only a few words, the conflict is diffused as if it never mattered much.

But Dylan has one last thing that really made me mad. Even his rushed and out of the blue proposal wasn’t as bad to me. Dylan seemingly abandons his dog. When he first appeared, Dylan’s got a special needs dog with him. It’s obvious that Dylan’s not Australian and he tells Kenzie that he found Phantom in Australia. Dylan hints that he, Dylan, is not there to stay. But, dammit, he also takes this dog on. He’s taken on responsibility for the dog! But when he decides to disappear, he leaves the dog with Kenzie along with a “he’s yours” note. Dylan is from Canada. Canada isn’t the Moon. Had he wanted to take Phantom with him (and he has the money to), I’m sure there are ways and means. WTF? Honestly at this point I was giving Dylan the finger.

And yet … and yet there were passages such as this. Bits and pieces that made me wish I enjoyed the book as a whole much more than I did.

All Kenzie Russell had to do was jog past him en route tosomewhere and her particular bounce, the toss of that half-pink hair, a waftof whatever siren scent she wore got his cells all sidetracked and interested.They ceased focusing on their individual, life-sustaining functions and allrushed to the same side of his body to watch her walk by.

And there’s a lovely scene at the end when one character gets the answers in life that she’s always wanted and that mean so much. Had the theater stuff interested me more, maybe it would have balanced out the rest. If only Kenzie hadn’t seemed so obsessed and Dylan hadn’t been a dick so many times. C-

→ Jayne
Previous article: REVIEW: The Pillars of the Earth by Ken Follett
Next Post: REVIEW: Conned (The Bureau, #6) by Kim Fielding