REVIEW: To Dare the Duke of Dangerfield by Bronwen Evans

I’ll begin this review with the last line of your novella, To Dare the Duke of Dangerfield.

He loved, with a consuming passion, the woman who’d dared the Duke of Dangerfield. 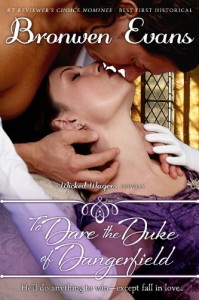 This line evokes a picture perfect happy ending for Harlow Telford, the Duke of Dangerfield, and Lady Caitlin Southall, the woman who dared him. It’s a fitting finish to your tale in which everything is so sweet, lovely, and darling that the book reads like a naughty version of a 1950’s Disney film. The story is an airy cliché, the characters overcome obstacles with unforced ease, each conflict is effortlessly resolved. It’s the literary version of a tiny, over-sweet cupcake; fun enough to take in, but too sugary and predictable to satisfy in any real way.

Catlin and Harlow share the same birthday (so adorable); he is thirty to her twenty-three. As the book opens, Caitlin, wearing trousers, is bent over her horse’s hoof, trying to free a stone caught there.

“If you’re going to point that delectable rump at a man you’re asking for trouble.”

Caitlin cursed under her breath and ignored the cultured baritone voice goading her from behind. She remained bent, focused on her task, and determined to clear the stone from her horse’s hoof. Still, irritation dribbled down her back. If she were a cat her hackles would have risen.

She knew who the voice belonged to. She’d heard the melodically ducal tones in church and the village store often enough. Harlow Telford, the Duke of Dangerfield, consummate rake and the most powerful man in the Kingdom next to the Prince Regent.

The man determined to see her father ruined.

(I considered whether or not a “consummate rake” would go weekly to church and sing in the choir and decided it seemed unlikely.  Harlow may be labeled a rake—the only proof of this is his catty mistress whom he dumps a day after spying Caitlin’s pants-clad derriere—but he’s really a Dudley Do-Right kind of guy. Every action he takes is fair, honorable, and just. He’s even sweet to his mom.)

Caitlin and Harlow live next door to one another although they haven’t seen each other for years. Recently, however,  Caitlin’s father’s, Earl of Bridgenorth, a sad sack of a man, staked her home Mansfield Manor, in a game of faro against Harlow who won it and now considers it his. Caitlin feels her father had no right to use the house as a marker—it belonged to her mother and, when her mother died, it passed to Caitlin. However, her mother made her father the trustee—a terrible mistake in that, once Bridgenorth lost the love of his life, he became a drinker and a gambler—and thus, legally, he was able to lose it to Harlow. Harlow loathes Bridgenorth because, fourteen years ago, after Caitlin’s mother died and her dad became a cad, Bridgenorth seduced and impregnated Harlow’s recently widowed mother. He then refused to marry Harlow’s mom who had a son, Jeremy, out of wedlock and both have socially suffered ever since. Harlow deliberately won Mansfeld Manor for Jeremy so that Jeremy will own the house he should have been raised in. Caitlin, however, knows none of this—in the never-real world of this novel, such a secret is easily kept from a 23 year old woman in living in a small Shropshire town.

Caitlin loves her home and is determined to hold on to it. So, the day after the trouser incident,  she sneaks next door to Harlow’s home at night where he is entertaining two friends, two whores, and his snippy mistress. Given that Caitlin is an unmarried woman, if it were known she visited Harlow’s home, Telford Court, at night and unchaperoned, she would be ruined. She goes anyway and asks Harlow to give her back her house. He instead offers her a chance to win back her home. She agrees and suggests a horse race—her horse Ace of Spades is the fastest around. He declines that offer and, after some negotiation, the two agree instead on three wagers—a horse race, a game of faro, and—I am not making this up—a cake-baking contest to be judged by the local vicar. If Caitlin wins two of the three, she gets back her home. If the Duke wins, he gets Caitlin in his bed. In some other book, this behavior would make Harlow an unscrupulous rake. But here, the minute Caitlin leaves, Harlow sends Larissa—the bitchy mistress back to London—and tells his friend Marcus he plans to marry “the chit.”

As soon as Caitlin appeared in his house, late, unescorted and dressed so inappropriately, he knew his fate was sealed. But he couldn’t stop from playing with her. Her damned pride and her blatant lack of respect for him had him wanting to bring her down a peg or two. The fact Mansfield Manor was supposedly in trust for her made him feel better about the leg-shackle in which he was now caught. For his mother would learn of her visit, and once she knew what Lord Bridgenorth had done to Caitlin—stealing and gambling away her inheritance—Harlow would never hear the end of it. His mother would insist on his doing right by her.  Besides, Marcus knew him too well. He did want Caitlin in his bed, and with a consuming passion that terrified him. He could not allow that to happen without marriage.

Though the contests continue, and Caitlin remains in the dark about her father’s bad behavior and Harlow’s initial motivation, there isn’t any real barrier between the lovers and their happily ever after ending. Slightly less than halfway through the novella, as Harlow escorts Caitlin home after the first wager—the faro game—is done, he asks her to marry him. She refuses him.

“I want to marry.” It was a bitter whisper. “I want children and a family. But I want love too. My parents, believe it or not, had a love match. My mother loved my father, faults and all. He was a penniless Earl and she the daughter of a wealthy Baron. He didn’t marry her for Mansfield Manor. In his youth he could have had any wealthy heiress, but he picked my mother. He was very handsome, my mother told me. Cook says he really only started gambling when mother got sick. It took her two years to die—such a painful death—and watching her fade away broke his heart, Cook said. He could not cope with his grief, and used drinking and gambling as an escape.”

She stopped speaking and he let the sounds of the night soothe her until she spoke again.

He listens to her talk about her dreams of true love in marriage and realizes  all that’s missing in his life. As he pulls into her driveway, he’s struck by how perfect she is. So,

Then, to her astonishment, he turned to her and took her face in his hands. “You,” he said, softly, “are an amazing woman, Lady Southall. Any man would be lucky to have you as his wife.” And before she could gather her wits, he kissed her.

He’s halfway to madly in love with her and, before the second wager is won—the cake-baking—Caitlin has willingly given her heart and virginity to Harlow—he is of course pleased to be her first—and agreed to marry him. But, since there are still eight chapters and an epilogue to go, a conflict must arise. Caitlin tells Harlow how thrilled she’ll be to give Mansfeld Manor to the daughter they will someday surely have. He, having not yet figured out a way to talk Jeremy out of wanting his father’s home, tells her he’s not exactly sure she will be able to do so. (It seems absurd he can’t tell her the truth about her father but he’s been sworn to secrecy by his younger brother and Harlow, ever principled, can’t reveal Jeremy’s parentage to Caitlin.) She becomes incensed at him, rescinds her acceptance of his proposal, and vows to win her house back. Thus the third wager—the horse race—must be run.

The race is done, tragedy occurs, followed by a miracle, a wedding, the best blow job Harlow’s ever received, connubial bliss and a loving promise the two will continue to wager the occasional bet.

No one suffers, everyone has a happy ending, and it’s all just so darn peachy, it veers into parody.

To Dare the Duke of Dangerfield was not my cup of tea, or, to stick with my earlier analogy, a treat I favored. The story is too neat, every issue too easily resolved, and every pain too quickly healed. Even very bad behavior by Jeremy—and I thought he behaved horrifically—is forgiven and he is appropriately apologetic and then fawningly grateful. To Dare the Duke of Dangerfield  would have been a much better book if it allowed for even a touch of the darkness that exists in everyone and in all relationships. No one is perfect and, in general, those that are portrayed as such make for dull protagonists.

The book is full of snicker-inducing phrases as well. When Harlow is about to make love to Caitlin, he says, ““I have to have you now” and “quivered like a lusty stallion.”  Caitlin suffers routinely from seeing Harlow and then squirming as her  “womanly centre pulsed with need.” And—I have come to hate this attribute—Caitlin has “tiny hands” and her itty-bitty fingers frequently showcase Harlow’s largeness of limb. After a delightful bout of sex on the bank of Lily Pond (Caitlin’s suggestively named swimming hole), Caitlin “tumbled from bliss into ecstasy, calling out his name as he shouted hers.” (I had to think about that too. Can one tumble from bliss into ecstasy? In doing so, did one leave bliss behind? Does that mean ecstasy is a sadder state than bliss?)

I felt–and was bothered by this– the novella has a confusing cover. The blurb at its top says “RT Reviewers Choice Nominee Best First Historical.” I assumed that accolade referred to this book. It doesn’t—the book that earned that award is your Brava published novel Invitation to Ruin. One could make the argument the accolade is meant to refer to the author of a book that won the RT Choice Award, but, I think that’s disingenuous.

I realize I’ve been very critical of this novel. And I do think it’s a fluffy, overly orderly tale. But it is a fun read, the plot and language are crisp and clear, and, the prose is often pleasantly amusing. I know there are readers out there who want their romances to be the stuff of tidy fairy tales. I’m just not one of them. For this reader, this book was a C- read.