It was the premise (and the pretty cover) caused me to request an ARC of your debut novel, Ties that Tether, a contemporary romance. The story concerns Azere, a Nigerian-Canadian advertising executive whose life is turned upside down when she meets and falls in love with Rafael, a white American of Spanish descent, despite her mother’s demand that Azere marry an Edo (Azere’s culture) and Nigerian man. This is a situation I’ve seen play out several times in real life (it’s commonplace in my community too) so the concept interested me. 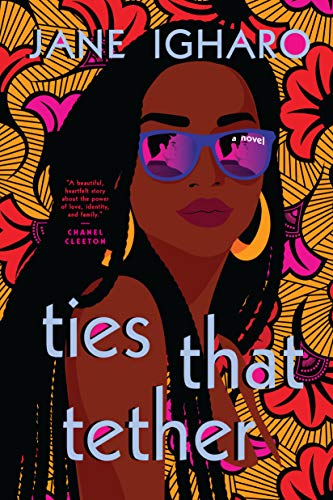 Azere and Rafael meet when Azere takes refuge in a Toronto hotel bar after a date her mother set her up on goes awry. She and Rafael, who is in town for a job interview, strike up a conversation. One thing leads to another and they get a room and have sex. But the next morning Azere leaves before Rafael wakes up.

A month or so later, Rafael shows up at Azere’s workplace; he’s a new hire. To Azere’s dismay, her boss insists that they work together on a project. Despite Azere’s insistence on keeping everything professional, she’s attracted to Rafael. But standing in their way is her mother and Azere’s deathbed promise to her father that she would marry a Nigerian man.

For a good part of the book, Azere’s mother doesn’t know about Azere’s attraction to Rafael but she sets up Azere on dates and insists her daughter marry and have children soon. At Azere’s age of twenty-five it’s past time, her mother feels. When Azere’s mother sets Azere up with Elijah, the man who, unbeknownst to her mother, took Azere’s virginity when she was nineteen and then abruptly left for medical school without a word, Azere chafes.

But even so, her promises to her father and her mother’s insistence that she marry a Nigerian man cause her to try to keep Rafael at arm’s length. Azere’s half-Nigerian best friend, Christina, is the product of an interracial marriage and she urges Azere to live her life for herself and not for her mother. But Azere fears that if she does her mother will disown her. When Azere realizes that she is pregnant and Rafael is the father, the situation becomes even more difficult.

Rafael is also in a difficult situation. It is obvious to Azere and to the reader that he has lived through a trauma and is only now beginning to recover. The event took place three years earlier and it left him a miles-deep heartache. Azere notices this in his eyes but he will not tell her what happened.

Will Azere tell Rafael she is pregnant? What will her mother do when she finds out? Will Elijah’s presence complicate things further? Will Rafael’s past be revealed? And most of all, will Azere find the courage to stand up to her mother and follow her heart?

There was no one thing egregiously bad anywhere in this book but it was disappointing almost across the board. I liked Azere. She was a generally nice person and her situation made me sympathetic to her. She was successful at her job and we got to see her perform well at work, something I always appreciate. Her background was interesting. But her obedience to her mother and her passivity when it came to pursuing her happiness took away any sense of her strength. Beyond her background she had few distinctive characteristics and that made her fade into the woodwork a bit. Her sister was a more charismatic and appealing character.

Rafael was likable too. He was recovering from something painful and was into Azere right from the beginning. Both these things made him read as a nice man. I wanted him to have more personality outside of that, though. There were no real flaws in his character.

Azere’s background was the best thing about the novel. I enjoyed the details about Edo Nigerian culture—the food, the clothes worn to a traditional wedding, the practice of omugwo (the pampering of a new mother).

But other than that, most of the book felt bland. Azere’s mother, though entertaining, was something of a caricature and the only source of humor in the novel (and that only for a short section in the middle). There was only a little humor, contrary to the blurb’s description of the book as a romantic comedy.

Awkwardly-placed exposition disrupts the reading experience, too. For example, in the midst of staggering toward the hotel bed and having her bra clasp unhooked by Rafael, Azere thinks:

This wasn’t where I envisioned my night going. A few hours ago, I was having dinner at Louix Louis, located on the thirty-first floor of the St. Regis hotel in Toronto. My date was not the man currently undressing me, but Richard Amowie, the engineer my mother referred to as “husband material.” Like me, he was Nigerian, of Edo descent. He was also Christian and, from the series of questions he had been asking, the kind of man who believed a woman’s single purpose was to breed babies and cater to her husband. Was I surprised by his archaic mentality? Not at all. My mother’s matches usually have this trait in common. As well as being Edo—the most important trait of all.

The book then plunges into a longer flashback scene. Honestly, I don’t know anyone who, in the midst of hot sex with a hot guy, would spend her time ruminating at such length about her bad date with another man.

The book is narrated in first person, mostly by Azere. Occasionally we get short sections in Rafael’s first person POV and their voices seemed too similar. Azere thinks in movie metaphors and in Rafael’s viewpoint he launches into one of these too. I wanted their voices to be more distinct.

More generally, there was a lot of telling and not enough showing in the book.

Azere’s desire to know more about the trauma in Rafael’s past eventually turns to mistrust. It happens so fast that I didn’t buy it—one moment she is comparing their happy life together to a romantic comedy montage and the next she thinks of him as a liar. That’s a huge turn based on very little (the buildup for that was briefly summarized but not shown).

Earlier in the book Azere felt great sympathy for Rafael because she discerned his suffering. But in this later section she seems to forget all about the pain that drives his secrecy. At one point she even describes herself as “kissing his lying lips.” He did not, in fact, ever lie to her, he just refused to discuss the sad thing in his past. And she was keeping key information from him too so it made no sense for her to be so outraged by his secrecy.

Rafael’s decision to keep his past secret from Azere made no sense. There was no way she wouldn’t find out about it since she was the mother of his child. Additionally, the nature of the trauma in Rafael’s past was obvious.

It didn’t seem believable that Azere, who had been so perceptive about it early on, wouldn’t figure out the rest of it later.

Another problem is that when Rafael and Azere’s lives intertwine because of her pregnancy the main conflict between them is a lack of communication. Though each faces other personal conflicts too, neither of them discusses these with the other. For most of the relationship there’s no hashing out of these problems, learning to compromise, or even a confession that these conflicts exist. When the black moment comes, we are supposed to believe they love each other deeply but their unwillingness to confide in each other keeps it from ringing true.

There were also a couple of contrivances with regard to Azere’s ex, Elijah.

Elijah’s willingness to marry Azere even knowing she’s pregnant with Rafael’s child doesn’t fit. Elijah was a commitment-phobe when he and Azere were together. Freedom and flexibility were more important to him than showing Azere care, so much so that he dumped her by ghosting her. Now that she she’s having a baby with someone else, he wants her badly enough to take that on?

It was also hard to buy that Elijah loved Azere from afar in the intervening six years but did nothing about it and didn’t try to get in touch with her for all that time. If he loved her, wouldn’t he have missed her? And did he sow wild oats during this time or was he celibate? The first would make his love for Azere appear meaningless but the second seems out of character.

With regard to the resolution of Azere’s conflict with her mom:

I loved the scene where Azere finally confronted her mom and stood up to her. It was so satisfying. I felt that Azere’s mother was controlling and bulldozing, so it was great to see that.

I wished that Azere and her mother hadn’t reunited at the end, though. One, her mother’s turnaround happened too quickly to be fully believable. Two, even once her mother finally backs off about Azere’s relationship with Rafael, it’s impossible to imagine that someone who would disown Azere, manipulate her and take advantage of her love to pressure her to live her life for them would not intrude into her life and try to control her and her choices further. I didn’t want that shadow to hang over Azere’s future.

The sex scenes in the book are relatively tame and fade to black. More heat would have been good; it would have given more glue to the relationship.

So—I liked the depiction of Nigerian culture and the main characters were nice people. The book kept me turning the pages well enough. But I was never wholly absorbed and the novel felt tepid. It wasn’t awful in any one way but it disappointed me in several. C-.