REVIEW: The Taming of Dr Alex Draycott by Joanna Neil 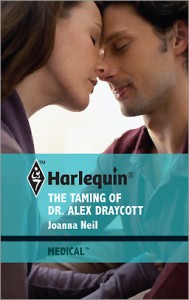 One of your novels reintroduced me to the Harlequin Medicals line several years ago. I haven’t read any since then, but when your June release became available I thought I’d give it a try. Our titular heroine, Alex Draycott, is a pediatrician who has made the transition from full-time doctor to half-time medical practice, half-time administration. This in and of itself is unusual in a Medical; we rarely see hospital administrators and when we do, they’re not sympathetic figures. Alex has moved to Somerset to take care of her brother’s children while he and his wife recover from a severe automobile accident. She takes on a position auditing a hospital which is running severe deficits with an eye to reducing them by cutting personnel and programs. This task brings her into immediate contact with Callum Brooksby, a consultant in A&E who does his best to avoid working with Alex as she tries to find ways to cut costs without hindering services. When he was first introduced, I didn’t think he was the hero, but he has to be, because Alex is physically aroused by him despite her irritation with his behavior.

He laid his hands on her shoulders, his grasp gentle, his fingers warm and strong, causing a ripple of heat to flow through her. It was odd, but all at once, as he held her, she became strangely conscious of her femininity. It was confusing. She was so used to taking charge, of being in control, and yet with just one simple act he had made her overwhelmingly conscious of his powerful masculinity.

This is not a book I would choose if I were introducing a skeptical reader to the Medicals line. While the characters spend a lot of time interacting at the hospital, it’s as much talk about cutting costs and Alex chasing Callum to get reports as it is about the practice of medicine. There are a few scenes with patients, but they were swamped in my reading by the bickering over Alex’s task. Moreover, while there are no babies, Alex’s niece and nephew play a prominent role in the story. They aren’t sugary sweet, instead they are relatively normal bratty children, but I didn’t find them engaging. And they take up a lot of space, since the main locations aside from the hospital are Alex’s home and that of her neighbor, Jane (who not so coincidentally happens to be Callum’s beloved aunt).

The aspect of the story which I found most problematic, however, was the characterization of Alex and her attitude toward her career. When I first read the title of the book, I assumed Alex was some kind of bad-boy hero. But not only is Alex the heroine, she is depicted as a tightly wound professional whose time is wholly taken up with her career and with assisting her brother’s family in their time of need. Alex’s professional commitment was treated as a problem in the story, rather than something to be admired. At the same time, Callum, who unprofessionally thwarts Alex’s efforts to gain necessary information at every turn and ignores her policies, is apparently supposed to be charming. If I had been treated the way Alex was by Callum in administrative positions I’ve held, the last word I would apply to that person would be “hero.”

The juxtaposition of Alex and Callum’s adversarial relationship at the hospital and their growing attraction, which plays out on the home front, is uneasy enough in the first part of the book, but it becomes really strained in the last third, especially when the hospital CEO starts cutting back A&E without telling Alex and Callum organizes a press conference to protest it, also without telling her. But although she tells them both off and stands her ground, all too soon she’s off to an Italian lunch with a once-more solicitous Callum and wallowing in her feelings for him:

It had never happened to her before. There had never been anyone who had made her feel this way, but now she knew she wanted a relationship that would last.

But where Callum was concerned, wasn’t that just a flight of fancy? She couldn’t help feeling that in the long term she simply wasn’t his kind of woman. He would never choose to spend his life with a career woman. His soul mate would be someone who was relaxed and tranquil, someone who could share his philosophy on life, instead of a woman who caused him problems on a daily basis.

At this point, had this been a print book, it would have hit the wall. She’s causing him problems? This is the man who undercuts her every chance he gets at work, lies to her about what he’s doing, and patronizes her when she stands up for herself professionally. I would definitely have feelings for this dude, but they wouldn’t be loving ones. Why is she attracted to him? I honestly don’t understand it. Why am I reading about a doormat rather than a heroine? I double-check the cover, and yes, it’s a Medical romance by a veteran author. Okay then. If we’re to get an HEA out of this setup, I am going to require a lot of grovelling, and not by Alex.

You will not be surprised to hear that there is no grovelling. Callum does prove comforting when Joanna’s brother suffers a setback in the hospital, and he supports her in her presentation to the Board of Directors, who then agree with her proposals to avoid shutting down A&E. But in the end, she is just grateful that he loves her. And his reason for falling in love with her and wanting to marry her?

“I couldn’t believe that I’d fallen for someone who was so strong and career minded—the very opposite of what I thought I wanted—but you showed me that you know instinctively what’s more important. You showed it when you came down to Somerset to look after Sarah and James, and you showed it again when you took the time off work to be with them. I know things are going to work out just fine for us, Alex.”

Yes, readers, he loves her in spite of her annoying career! And Alex’s response?

“I never met anyone who could make me feel the way you do. You’re so calm and relaxed, you don’t let things throw you, and you know exactly how to cajole me into seeing what really matters. And at the same time you’re single-minded and so good at what you do. You’re the perfect man for me…the only man for me.”

At this point I’m past denial and anger and well into acceptance. She’s going to marry him, chuck her job, fix up the house and have children. And by the way, that’s her house he’s moving in to, the one next to his beloved Aunt Jane, which the income from that horrible career made possible.

I am clearly not part of the target audience for this novel. In the past decade, the Medicals line has embraced more egalitarian romantic relationships and shown that it takes women’s occupations and careers seriously. This book sits squarely outside that new approach. It features a professional woman who is “tamed” by jettisoning the career she worked so hard to establish. And the taming is done by an alphahole who doesn’t respect her. I would have happily read about a Betty Neels-type heroine who doesn’t want a career outside the home. But this is the worst of both worlds: an accomplished professional woman who decides a man who doesn’t want her to have a career is the only man in the world for her. There are undoubtedly readers for whom this book can work, but I’m not one of them. Grade: C-