As a child, I loved Frances Hodgson Burnett’s The Secret Garden. It’s considered a classic novel and is the story of children beginning to blossom as they bring a locked, abandoned garden to life. 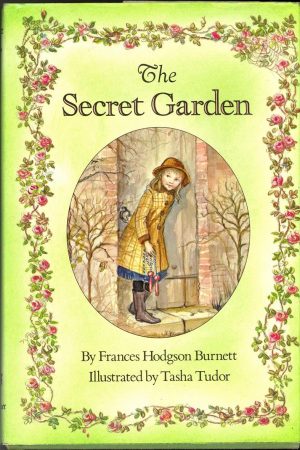 I was introduced to Burnett via a serialized reading of Little Lord Fauntleroy that was part of a children’s hour radio broadcast I listened to as a young child in Israel (yes, I got my childhood programs from the radio as well as the television). I looked forward to those broadcasts with bated breath and I still remember the song “My Bonnie Lies Over the Ocean,” which bracketed the radio readings of Little Lord Fauntleroy.

Sometime in the past couple of years I revisited Little Lord Fauntleroy and was stunned by how bad it was: quite possibly the most treacly book I have ever read, poorly researched, and racist. Had I reviewed it here, I would have given it a big fat F. My expectations of The Secret Garden, my favorite Burnett novel in childhood, dropped at that time, but I thought that the book could not possibly be as bad as Little Lord Fauntleroy. For one thing, I remembered that the novel’s main character, Mary Lennox, was not an idealized, sugary, Marty Stu figure like Cedric, the eponymous Little Lord Fauntleroy.

The recent pandemic outbreak seemed like a good time to test that theory. The stress and anxiety has made me more amenable to reading something simple and potentially heartwarming. Some of my suppositions were correct; The Secret Garden is considerably better crafted than Little Lord Fauntleroy. But in other ways I was wrong.

The novel begins when nine-year-old Mary Lennox loses her parents to cholera. Mary is a spoiled and surly child living in India (no more specific location is given) when her home is struck with the illness. Mary’s parents and her Ayah (nursery maid) die, other servants desert the house, and the orphaned Mary is discovered utterly alone by two soldiers who come in to see if anyone has been left alive.

After a brief sojourn with a clergyman’s family (the children of the household mock her stubborn, angry demeanor by dubbing her “Mistress Mary, quite contrary,”) she is sent to her uncle’s Yorkshire country house. Mr. Craven, her uncle, is largely absent and his household is run by his housekeeper, Mrs. Medlock, who picks up Mary in London and conveys her to her new home.

Mrs. Medlock doesn’t suffer fools gladly; she expects Mary to dress herself and amuse herself on her own (not wholly believable but I went with it), something Mary is unused to. Martha, a young Yorkshire maid, serves Mary a bit, chattering and catching Mary’s reluctant interest.

At first Mary is furious at being treated in such a way; she is arrogant and expects everyone to kowtow to her (we’re told more than once that her Indian servants did her bidding with alacrity).

As the days go on, though, Mary realizes she’ll have to find a way to fill up her time on her own. Martha gives her a jump rope encourages her to seek out the gardens; Mary does, and discovers the location of the “secret garden” Martha has mentioned to her.

The garden has been locked for a decade, Mary learns—ever since Mr. Craven’s late wife was badly injured when she fell off one of the garden’s trees. When she subsequently died, Mr. Craven could not bear the place, once his wife’s favorite spot. He locked the walled garden and buried the key. No one knows where it’s buried. Even more mysteriously, the garden appears to have no door.

Mary becomes acquainted with a handful of people one by one, and very gradually her circle of acquaintances, and not only that, of people she likes, widens. Martha is the first person Mary grows slightly fond of, then Ben Weatherstaff, a grumpy gardener, and a robin he likes. After that Deacon, Martha’s twelve-year-old brother, who can literally charm birds out of trees.

One day, the robin leads Mary to dig around in the soil at a particular spot, and she finds the key to the garden. Later she discovers the door, hidden under a thick cluster of ivy. She wonders if the garden is truly as dead as it appears to be, and begins to weed it, keeping her possession of the key to herself. The garden is a forbidden place, after all.

Mary’s friend Deacon is without a doubt an idealized figure, at times to an eye-rolling degree. He attracts animals and can make any plant thrive. He has tamed a crow and two squirrels (all three take turns sitting on his shoulders), a fox cub and a lamb. He can even speak to the robin in its own chirpy language. Mary lets Deacon in on her secret, and he begins to work in the garden with her.

Working in the garden and skipping with the jump rope strengthens Mary’s muscles. Whereas once she had a sallow complexion and a pinched expression and pecked at her food, now her appetite grows, her skin takes on a healthy glow, her eyes and her cheeks brighten. She loses her sullen demeanor and the people she likes come to like her in return.

On a particularly windy night, Mary hears a childish cry in a distant part of the house. Martha tells Mary that she has mistaken the howling of the wind for a human sound. On another occasion, while exploring the house, Mary hears another such cry and approaches the room it originates from. But Mrs. Medlock catches her and forbids her from encroaching on that part of the house.

Who is the child crying in the night? Can Mary and Deacon bring him or her to life and good health, much as the garden has brought Mary to both? And what will happen when Mr. Craven comes home and discovers the secret garden in bloom?

I can see why The Secret Garden is considered a classic—the concept of the children’s bodies and spirits healing as they awaken a nearly magical garden is not only heartwarming but also has an almost mythical air. There is more than a touch of the fantastical to this book, but most of the magic in it can be explained and viewed as natural rather than supernatural. Much of this is simplistic. Neither the major characters or the natural world have much complexity. But this is a children’s book, so I didn’t necessarily expect complexity.

The one human character who might be said to exist on the other side of the natural / supernatural divide is Deacon—he is a human boy, so we’re told, but he has capacities no boy can possess in reality. No creature, no matter how shy or secretive, can fail to trust him. There were times when I couldn’t suspend my disbelief where he was concerned.

Fortunately, Mary, being a more flawed and therefore more believable character, balances him out, as does the child who cries out in the night. Mary’s transformation is at the core of the novel. It’s easy to want to read more in order to see how she changes, even as she changes the garden. Still, the book approaches sappiness.

The book is also horribly racist. Indians are othered to an extreme degree, from beginning to end. In the very first chapter, the Lennox family’s Indian servants are portrayed as hard to fathom.

At that very moment such a loud sound of wailing broke out from the servants’ quarters that she [Mary’s mother] clutched the young man’s arm, and Mary stood shivering from head to foot. The wailing grew wilder and wilder.

The “natives” (a word that seems pejorative to me) are portrayed without dimension. Multifaceted desires, needs, emotions and skills are absent from their characterizations. They are not given names or personalities, either.

Contrasting the maid Martha and the servants Mary had in India, the novel’s omniscient narrator tells us: “This was plain speaking and Mary Lennox had never heard the truth about herself in her life. Native servants always salaamed and submitted to you, whatever you did.”

Even the climate in India is a monolith in this book, with no distinction from season to season or place to place:

“I can’t help thinking about what it will look like,” he answered.

“The springtime,” he said. “I was thinking that I’ve really never seen it before. I scarcely ever went out and when I did go I never looked at it. I didn’t even think about it.”

“I never saw it in India because there wasn’t any,” said Mary.

A line drawn is from India’s stifling heat to Mary’s initial ill-health and sallow complexion, and another from Mary’s newfound haleness and well-being to the salutary effects of the crisp Yorkshire air.

Worst of all is the dehumanizing of Indians. In one scene, after Martha tells Mary that she’d expected her to be an Indian child, we get this:

Mary sat up in bed furious.

“What!” she said. “What! You thought I was a native. You—you daughter of a pig!”

“Who are you callin’ names?” she said. “You needn’t be so vexed. That’s not th’ way for a young lady to talk. I’ve nothin’ against th’ blacks. When you read about ’em in tracts they’re always very religious. You always read as a black’s a man an’ a brother. I’ve never seen a black an’ I was fair pleased to think I was goin’ to see one close. When I come in to light your fire this mornin’ I crep’ up to your bed an’ pulled th’ cover back careful to look at you. An’ there you was,” disappointedly, “no more black than me—for all you’re so yeller.”

Mary did not even try to control her rage and humiliation.

If not for the racism, I might have been swept up in the quiet magic worked by the secret garden and the Yorkshire moors. I was able to not only read to the end but to turn pages pretty well, considering that the book has a leisurely pace. I was able to compartmentalize and enjoy the story to a degree. But not entirely–my mind ping-ponged from the comforting calm of the garden to the awful bigotry.

This is a hard book to grade because I can see why it’s a classic to some and why others will find it offensive. To an extent I felt nostalgic due to my childhood enchantment with it. Splicing these factors together brings me to a grade of D/C-.