REVIEW: The Saint by Monica McCarty

The Saint is the first of your books I’ve read and, if they are all like this, it will be the last. This book combined the worst of the two components of historical romance. The history, of which there is a ton, is info-dumped in large swathes into your prose—I began to feel as though I were studying for a test– and the romance is so frustrating, by the novel’s end, it would have suited me just fine had Helen and Magnus (known as Saint), the star-crossed lovers of the tale, ended up apart. 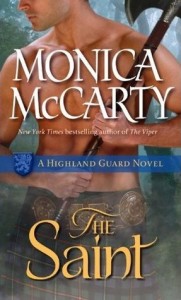 The book takes place in the era of the famed Bruce: Scotland in the early 1300’s. Saint is a MacKay and Helen is a Sutherland and, of course, the two clans share a long and bloody feud. Helen and Saint first meet at the Highland games when she is fourteen and he is nineteen. The two fall in love, despite only seeing each other for a few moments when the Games are held each year, but keep their love a secret. Finally, when Helen is 18 and old enough to wed, Saint, at the 1305 games, finally beats his Sutherland nemesis Munro for the first time. After the match, Saint finds Helen, gives her a long hard kiss–her first–and asks her to marry him. She, unable to choose him over her family, turns him down. Saint, instantly a man ruined for life, immediately accepts a dangerous offer by the Bruce to become one of the Kings’s newly formed secret elite Highland Guard created to defeat the English.

One chapter and three years later, Saint, feeling as though he’d rather be tortured by the English Crown’s vilest knaves, is headed to his best friend’s wedding. William “Templar” Gordon, a member of the Highland Guard and a close friend of Helen’s brother Kenneth, is marrying Helen. Even though Saint and Templar are best friends and are partners in the secretive Highland Guard, Templar has never mentioned his courtship—albeit scant—of Helen to Saint. So William has no idea that his best friend Saint—so called because he never whores around—holds an inviolate tendre for Helen. Nor does he have any idea that Helen, whose brother has pushed her upon William, is still profoundly in love with Saint.

Saint shows up Dunstaffnage Castle, Helen’s home, the night before the wedding is to take place. The two have not seen each for three years, not since she rejected his proposal, and when they lay eyes upon one another, both realize they are still madly in love. Helen, who has known for some time she should have chosen love over family, finds Magnus and asks him for another a chance. He, full of (arrogant) duty and honor, blows her off, telling her he feels nothing for her. Helen then marries William who, as the ceremony is taking place, suddenly gleans the feelings of his bride and best friend. On their wedding night, William, the hero in all this, refuses to take Helen’s maidenhood given that she loves his best friend. In the morning, he, Saint, and the Guard leave for an undercover mission to save the Bruce’s brother Edward from a siege in Galloway. William is essentially killed on the excursion although, since he’s only (to steal a phrase from The Princess Bride) mostly dead, in keeping with Guard code, Saint has to actually finish him off and make him unidentifiable. This latter action leaves him with enough guilt to ruin the rest of the novel.

He again rebuffs Helen, now a widow, and the two spend another half year apart. Then, as part of his service to the Bruce, Saint is thrown together with Helen, first at Dunstaffnage and then on the road with Bruce and his men. (Helen has some skill as a healer and the Bruce brings her along for his health.) Over and over again, Helen offers herself to Saint, but he, full of guilt for—please—“murdering” her husband and his best friend, forces himself to rebuff her. This goes on for way too long. Then, the two begin to act on their OVERWHELMING lust for one another but keep getting interrupted. This novel has more of what I can only call sexus interruptus than any I’ve read in recent memory. The two will be making out madly, and suddenly, have to stop. They will be about to do the deed, and suddenly, be forced by attackers to part. This happened so many times in the book, it infuriated me. If authors or publishers think this adds to the sexual tension, they’re wrong. It’s just annoying.

There’s a complicated plot here all about the Bruce, Scottish history, Edward, and a bunch of other stuff that never grabbed my interest. I haven’t read the other books in the series, so, I will concede that, had I, perhaps I might have cared more. But, coming into the exploits of the Highland Guard for the first time, I found their adventures to be pedantically rendered and rather dull.

So, I didn’t like the lovers or the plot. But, I did like one aspect of the book tremendously. Helen’s older brother, Will, head of the Sutherland clan, is, despite all his best intentions, madly in love with Muriel, an independent woman whose father trained her to be a healer. (She trepans!) Muriel lives alone in a cottage on the edge on Sutherland land where she and her father came, years earlier, so she could recover from a violent attack that left her unable to have children. Will wants to be with Muriel desperately but believes, as head of his clan, he must marry and produce heirs. He begs Muriel to be his leman and she, despite loving him as deeply as he loves her, says no, saying his offer dishonors her. Their story is moving, sad, and full of real emotions; I cared about their happiness and was thrilled whenever their tale replaced that of Helen’s and Saint’s.

If readers are really interested in the story of Robert the Bruce’s quest to unify Scotland and enjoy lovers who must overcome every sort of barrier possible before they can be together, perhaps The Saint will appeal to them. I’ll confess upfront that, since I know how the Scottish quest for independence ends up (I’ve read too many descriptions of Culloden—and yes I know that was hundreds of years later.), I find retelling of that time less than engaging. I also prefer a bit more joy in my books—if no one is happy until the very last chapter, neither am I. The Saint was not my cup of ale. For me, it was a C-, saved from a D only by the grace of the story between Will and Muriel.

→ Dabney
Previous article: REVIEW: Herb Witch by Elizabeth McCoy
Next Post: REVIEW: The Words of the Pitcher by Kei Swanson