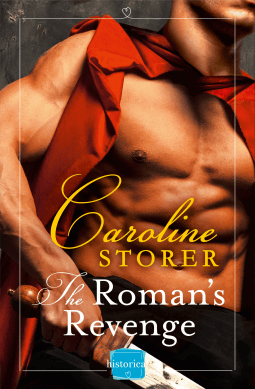 The daughter of his sworn enemy…

For wealthy merchant Metellus, nothing is as important as his desire for revenge. Ever since his father’s death, he’s been planning to wreak vengeance on those responsible. So when he rescues the daughter of his sworn enemy, Livia Drasus from a shipwreck Metellus sees an opportunity to set his plans in motion.

…is fair game in his planned revenge!

Making Livia his wife is the perfect way to get close to her family. What Metellus doesn’t expect is the fire that burns so passionately when he takes feisty Livia to his bed! Falling for his wife was never part of the plan, and soon he stands to lose more than he ever thought possible. Now Metellus must decide, is gaining his revenge worth risking his heart?

The revenge plot is a tried and true one in romance books. I dare say that most of us have read more than a few over the years. When I saw the Roman setting of this book, I decided to give it a go hoping that this would be an updated revenge story with a strong heroine and without all the hero ass-hatery. It’s bad for me that it’s not but it’s good for fans of dyed-in-the-wool romance revenge.

Almost the first thing I noticed is immediate mental lusting (ML). Lots of ML. From both main characters we get ML. Even during the raging storm which is about to swamp the ship. Me, I’d be wondering if I’m going to survive the next few minutes and looking for a way to improve my odds, not eyeing the hottie.

So they’re on the island, trying to survive and clashing. Lots of clashing, with gazes locking and faster breathing as they wrangle with emotions. Very standard romance enemies stuff which of course then leads to a searing kiss. Not a scene goes by without some body part reference or ML. 20% into the story and I want something more than this.

The conflict between Metellus and the Drusii family is concrete and not of the “oh, this is just a misunderstanding” variety. Metellus does have reason to hate them and seek revenge. He hadn’t planned on using Livia – point in his favor – but she’s handy and he’ll take what he can get. I’ll happily give more points for the interesting integration of Nero’s madness and the eruption of Vesuvius into the fabric of the plot but even at the 25 % mark, I was still looking for action instead of just the drooling over each other’s bodies.

Idle question – How many times is the verb “stiffen” used in this story (and not sexually, BTW)? 40 times, yes I counted. Livia must be as stiff as a 2 inch thick board with tetanus. There are also lots of uses of the word “hard” to describe the lust that slams into him or why she’s ogling his ripped body muscles. In all honesty, if he actually did look anything like the cover model, I’d be eyeing him too.

Anyway. Metellus is like a randy schoolboy who can’t control himself while Livia is unable to control her thoughts about wanting to kiss him, touch him, look at him, etc. This gerbil wheel ride is getting old. But! Livia is impressing Metellus, despite his reluctance to admit it. He’s got the dawning of some respect to go along with all the ML.

Finally the sex scenes arrive and frankly it was more a relief to get them over with. Of course virgin Livia climaxes her first – and second – times. And she realizes she loves Metellus – actually the knowledge “slams” into her as emotions and such things tend to do in this book. See Livia has morals and wouldn’t just give herself to a man she didn’t have feelings for and hasn’t she been attracted to him from the start as she ogled him? Yep, physical attraction and loss of virginity + climax = love.

Livia lifts her chin so much I’m surprised she’s not stargazing and when she’s not doing that, she’s stiffening or bristling. Meanwhile for each of Metellus’s nice steps forward, he’ll include a “slap you down” one back. Ugly silences fill the air between them and Metellus looks at her with hard glares. I guess with his weathervane changes, I’d be on the defensive too. Metellus’s changes are exhausting. If this sort of hero floats boats, they’ll be riding high with this one.

When Metellus finally gets Livia to accept what he’s telling her – and boy does he have to be blunt – I do feel for her. Her naïve virgin self goes straight to love, do not pass infatuation, do not collect £200. “But it must be love,” she burbles. “I felt our connection.” Poor Metellus has a time disillusioning her while he insists it’s just infatuation and orgasms. Of course she’s convinced they’re soul mates.

Metellus is in torment. He wants his revenge but he’s never been affected by a woman like this before. One night will never be enough. Sex with (the virgin) Livia is the best he’s ever had. So of course he must take this conflict out on Livia by treating her like something on the bottom of his sandal while insisting on hot lovin’ every night. This is also fairly standard stuff for this plot type.

Livia hasn’t painted her brother in the best light and he certainly lives down to her descriptions. I’m afraid he’s little more than a flat, one (nasty) note character. Portia, on the other hand, is a true friend to Livia and probably the most concerned about her of any human on the planet.

The history needed to explain parts of the plot is well used and the “feel” of the book isn’t bad though Portia seems scandalized at Metellus’s rep as a womanizer. Wasn’t that usual for men of the age?

The grim truth of what happened to Metellus’s father is fairly easy to figure out. The resolution of the whole impetus for the plot also checks all the required boxes on the wrap up.

This is probably catnip for those who devour revenge plot, old skool “treat the heroine like shit for 90% of the book then fall at her feet for instant forgiveness because she’s just so understanding and in love with him.” I agree with an amazon reviewer who said too little too late but that’s me. If this style is for you, and you’re looking for a lesser used historical time setting, then dive right in. I, however, wanted to kick Metellus where it counted one too many times. C-