I think I’ve mentioned in the past here at Dear Author that I’m ambivalent leaning towards uninterested when it comes to mermaids in fiction. I can be persuaded otherwise, but it’s just not something I seek out. For that reason, I initially skipped past the offering for your book on NetGalley but then I saw mention of surfing. Girls who surf? That, I can get behind. 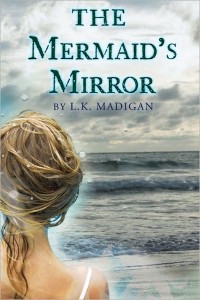 Fifteen-year-old Lena has spent practically her entire life watching the ocean. Her greatest dream, in fact, is to surf its waves. Unfortunately, ever since her father nearly died while riding the waves many years ago, not only has he never returned to the water, he has forbidden his daughter from doing the same.

When asking for surfing lessons as her sixteenth birthday present fails, Lena decides to take up on a prior offer and learn from her boyfriend’s older sister. And to her delight, Lena realizes she’s a natural at surfing. Maybe it’s genetic since her father was said to be an amazing surfer as well. All this is done, however, without her parents’ knowledge.

But while the surfing is going well, not much else is. Lena has been feeling an odd siren call towards the sea. Sometimes she wakes up in the middle of night to find herself standing on the beach with no recollection of how she got there. She also discovers that heights lead her to faint. Her relationship with her boyfriend, Kai, is very sweet but she’s not sure if her feelings have changed much since they went from friends to more. And then there are the brief glimpses of a silvery tail she’s seen among the waves. It might just be a fish or a seal but one day, she could have sworn she saw a human face.

While writing up this review, I realize that this book doesn’t have much meat to it. It’s a pleasant, even read, but lacks a certain amount of depth. I did like the conflict Lena had regarding what happened to her biological mother and how her father and stepmother kept the truth from her. It can be said they did it for her own good and were simply waiting until she was older, but I can also see it from Lena’s perspective, seeing as they deliberately misled her into thinking her mother was dead. I am sidestepping the details here to avoid outright spoilers even though I don’t think it’s that difficult to read between the lines. I figured out the truth the first time the mermaid made her appearance at the end of the prologue, and I doubt I’m alone in that.

I wish we could have seen more of Lena’s relationships with her friends and boyfriend. I understood that Lena was not very confident of her feelings for Kai, that they progressed to being boyfriend and girlfriend because it seemed natural, but not because of any shift in feelings on her part. While friends to lovers is a favorite trope of mine and seeing it fail here was kind of a bummer, I did think it was realistic because I do think this happens a lot too.

My main complaint has more to do with Lena’s friendship with Pem. I understood that the balance of friendship between Lena, Kai, and Pem was disrupted when Lena and Kai started going out, making Pem jealous, and I liked that quite a bit because it is a realistic concept. However, we didn’t see a lot of her resentment. It’s told to us and that tends to leave less of an impact. I’m not sure if we’re supposed to see Pem hooking up with the college guy and not telling Lena (she catches them making out in the guy’s car in a parking lot) as an extension of that but the emotional resonance was never emphasized here.

The section of the book in which Lena goes to the mermaid village was a sudden shift for me. Maybe it was necessary to explore the past and her mother’s history, but after the realism of the rest of the book, it was strange turn of events. That might have been deliberate — to be more dreamlike, but I’m not convinced it succeeded.

One aspect that really disappointed me was the romance with one of the mermen. What was up with how that ended? While the resolution to the question Lena and Kai made sense to me, I will confess that how that subplot turned out was quite dissatisfying.

I do wish there’d be more surfing and less time focused on mermaids. I realize with a title like The Mermaid’s Mirror that this is a tall order, but it’s refreshing to see female characters in active sports, particularly in YA, that I was left hungering for more. I also admit that the way surfing came so naturally to Lena was a bit disappointing. It made sense in the book’s context but still, it wasn’t very exciting.

And that sums up my reaction to this book. It’s a fine read but not much about it is very exciting. In many ways, it’s very predictable and while that can be okay because sometimes readers do need predictable stories, there was a noticeable lack of depth and subtlety to set it apart. C-