Your publisher kindly sent this book for review and given the recent announcement of the great sales success of this book, I was eager to read it. I can only conclude that the success of this book is due to a great hunger for category books by readers who believe that they aren’t category readers because The Marriage Bargain reads like a standard Harlequin Presents.  It has a misogynistic asshole hero and a perfectly amazing self sacrificing heroine who will debase herself to save her family. 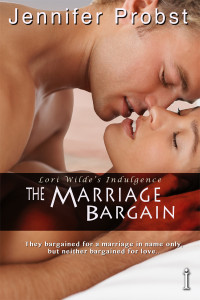 I’m not sure what I was expecting but the stock characters, predicable plot, and mundane prose wasn’t it. Alexa is unhappy. She’s single and while her bookstore is above water, her family’s home is not and thus she is need of money. She, like the ladies in The Witches of Eastwick, creates a spell to bring her the perfect man. She’s written a list of all the qualities she wants in a man along with a request for 150K.

Fate carries those wishes out on the wind toward Nicholas who needs a wife. His wealthy uncle passed away and a provision of the will (we all know how much I love these will books) requires Nicholas to marry in order to gain control of the architecture and building company. Nicholas apparently can’t run his own company but must have his uncle’s to achieve his dreams. He has his own list of requirements in a wife including that she must have no sex with him while they are married because women who have sex with men become emotionally attached to that man and he cannot deal with that in his one year marriage.

Alexa needs to get married because she is going to use this money to save her family home.  Alexa is one of those martyr heroines. Everything she does is out of selfless love for others. She is going to marry someone and be treated like dirt by him in order to save her family.  She rescues dogs.  She runs a bookstore.  She refuses to accept one penny more than the 150,000.00 from her husband. Not one thing because she is too good and honorable for that.  But, of course, Alexa refuses to tell Nicholas of her need for the money because she doesn’t want his pity and must walk away with her pride intact.  (Dude, you are marrying for money)  Nicholas assumes the worst (greedy bitch).

Nicholas is a mysgonist. The stunning supermodel he currently dates was perfect for social functions and great sex, but not marriage.  Gabriella was a sharp conversationalist and he enjoyed her company, but he was afraid she was already falling in love with him.  … No matter how he laid out the ground rules of a marriage, emotion would ruin it.  She’d become jealous and demanding, like any normal wife.  When Alexa confronts Nicholas on the fact that he can’t be celibate for one year he says “Alexa, I understand this doesn’t seem fair. But a man is different.” Later in the book, he accuses Alexa of cheating on him and the contract. For her own good. “He stood in front of her, hands on hips, and gathered all his power to make her mad as hell. Because he knew through her anger he’d find honesty -the passionate woman she hid from him in her ridiculous belief he didn’t want her.” To do this, Nicholas says “I wondered if you had time to make it to the bedroom or did Conte just take you against the wall before dessert?” Remember, he is doing this for her own good.

No matter how insulting he is, though, Alexa’s lady parts go wild.

But what dooms the book for me is its unrelenting predictability and its old school references. The old flame enters the picture to stir up jealousy.  Alexa is befriended by a handsome and wealthy man stirring those unnatural “woman” feelings in Nicholas.  Misunderstandings and lack of communication drive the two apart.  There isn’t a step in the book that a reader can’t predict.

The heroine goes to a party with a bunch of wealthy people and is overcome by the smells of “Shalimar and Obssession”.  Her eyes are described as a “disturbing mix of aquamarine and sapphire.”  I feel like this book sat under someone’s bed for 9 years and it was recently dusted off for publication.  There are idiotic phrases uttered like following:

“Is this a contract?”

He nodded. “I know you’ll need your lawyer to look it over.”

“No need. A friend of mine is a lawyer. I learned enough, since I helped him study for the bar exam.”

Or “He almost enjoyed the match of minds, just like he had in the old days.” The match of minds? The old days?  These two last knew each other when Nicholas was 16 and she was 14.  The humor seemed forced. “Could she marry a Yankees fan? Wold she be giving up all her morals and ethics?”  Marrying a guy for money is okay but marrying a Yankees fan gives her pause. There are so many throw away elements in the book that have no purpose like the spell cast in the beginning. There is no continuation of spells and magic throughout the book.  Nicholas is described as a master poker player who “had spent the past few years blowing off steam in games where the night turned into day and he walked off thousands richer” and while there is a poker game between the two, Nicholas hardly comes off as a savvy, odds minded individuals.  It’s like there was a magnetic romance hero trait set and a few were plucked out whenever there needed to be some descriptive words added to the text.

This book is selling like hotcakes.  Last week it was number 6 on the NYT Bestseller list. I chalk it up to some good promotion (many reviews appear to be from free copies); a sexy cover; and the seeming universal appeal of the category.  C-