REVIEW: The Man Behind the Scars by Caitlin Crews

I am a big fan of your Harlequin Presents and I feel like you exploit the category length and the fantasy feel of the stories in the best way. This latest effort, however, spent so much time in the head space of one character that I felt disconnected with the hero. The rushed ending didn’t help. 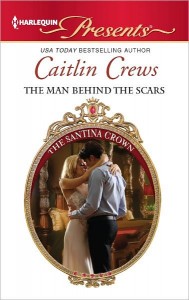 When we first meet Angel Tilson, she’s not terribly likeable. She has skated by on her looks, believing that those alone would support her but when her mother incurs a $50,000 credit card bill in her name, Angel is faced with impending doom. Bankruptcy followed closely by public humiliation may be the only result unless she finds herself a rich husband. She determines to do just that at her sister’s wedding to a wealthy prince where rich men are thick on the ground. When Angel sees and targets Rafe McFarland, the Eighth Earl of Pembroke, I’m even more perturbed because she targets the man who is obviously alone and visibly scarred.

But her brazenness is mesmerizing and she spells out her plan without qualms to Rafe. She needs to marry for money. After a short conversation, Rafe tells her she can quit with the sales pitch and that he’ll marry her.

Beneath Angel’s studied insouciance, she’s filled with self loathing. Marrying for money is something she had always despised because of her mother’s own embarrassing behavior. Why and how Angel sees beneath Rafe’s scars isn’t well articulated. She just does. Perhaps she sees an echo of her own self hate because Rafe, like Angel, believes himself to be a monster both on the outside and the inside. He believes that a good man wouldn’t allow someone like Angel to grasp at him for rescue even though she is only marrying him for his pots of money.

If he was any kind of man at all, if there was any shred of humanity in him, he would not let her chain herself to a ruined creature like him. She didn’t know any better—but he did. She saw only bank balances and some kind of savior, but he knew that was only the tiniest part of what she’d get—of what she’d have to endure. He carried the weight of every single person who had ever been close to him. Surely Angel deserved better than that. Better than him.

While the emotions are strong on the surface, the underpinnings of the story are weak. Or perhaps weak in the execution. Rafe’s secret hurts are revealed much later in the story and lack emotional power because they are unveiled in such a short space and through minimal dialogue.  So much of the story is spent in Angel’s headspace and her viewpoint is so dense at times I felt like I was peering through a thick cloud of perfume.

There were some great ideas that were raised but never addressed. Was Rafe punishing himself again by marrying a woman who only wanted what was in his pocket book? Was Angel merely repeating her mother’s tragic bad decisions without recognizing their similarities? There were no moments of clarity in which Rafe or Angel discovered the better angels inside of them. Instead, Angel determined that she loved Rafe. Rafe lashes out and then they reconcile.

Perhaps it was the constraints of the category, but I felt unconvinced by the love story. The story suffers from shortness and relies heavily on the category constraints. The cruel barbs followed by the quick apologies near the end didn’t work as well here. The heroine was the only one that showed any kind of devleopment but too much time was spent contemplating internal angst.  C-