REVIEW: The Luck of the Devil by Barbara Metzger

When Rowanne Wimberley meets Carey Delverson, one of the Delverson Devils, at Almack’s, he is about to join his regiment in the Peninsula. Carey’s service is grueling, and his new sense of responsibility makes him offer (unsuccessfully) for a young relative. Rowanne isn’t waiting for this devil to capture her, but she’s in no hurry to settle for a man she doesn’t love.

When I’m in the mood for a humorous Regency era book, you are one of the authors to whom I turn. I read excellent reviews of this book and thought with that (new) cover, it has to be funny and amusing. Well, for me this book is much darker than any of yours I’ve read to date. Yes, there is some humor sprinkled through it but also a lot of ninnyhammer relations and – I just can’t phrase it better – some dark tones that I hadn’t expected.

Rowanne and her brother Gabe are in London living in their uncle, the Earl’s, townhouse. Their own diplomatic service parents are now dead and after a year of mourning, it’s time for Rowanne to make her debut. Her politically minded brother will squire her around but he’s hopeless at providing male friends to dance with Rowanne. During her first appearance at Almacks, she meets the Delverson cousins – one Duke, a younger brother and their cousin who is on his last night on the town before shipping out to the Peninsula. Rowanne dances once with Carey Delverson then gets a first hand glimpse of his devil-may-care joie de vivre.

For a year or so after that, all Rowanne hears about Carey comes from war dispatches which mention his bravery and amazing luck. Wellesley might have initially had his doubts about Carey but those are proved wrong with Carey bravely rallying his troops, earning glory and also scars. Meanwhile Rowanne finds no man to her liking but settles down to enjoy her time in London. Her aunt in Bath might rail at Rowanne being too picky but Rowanne doesn’t let that bother or influence her.

Carey gets called home when his father dies. Initially he’d sent a letter to his hey-go-mad cousin to see to Carey’s female relations but Harry the Duke manages to screw that up. He also probably screws something else that will bedevil Carey later on. Carey arrives to find his father’s mistress has been hired to chaperon his half-sister (a wild minx) and step-aunt (who is a young widgeon). Carey sorts that mess out and manages to save widgeon Emonda’s reputation by suggesting a marriage in name only to Rowanne’s uncle. After another encounter with Rowanne in London that ends with a burning kiss, he’s off back to the wars to earn more glory and scars. Several tales of his continued luck – which are frankly a bit unsavory – are told. 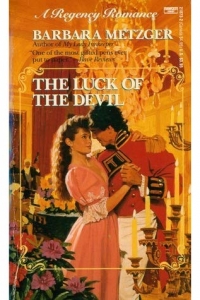 Finally something happens that brings a badly wounded Carey home for good. His sister is out of control, his step-aunt is still a watering pot, and the woman he loves has a decidedly mixed opinion of him all due to his idiot relations. Can he straighten out the tangled mess and win Rowanne?

As I said, there are a few humorous moments here but not as many as I was expecting based on past experiences. Carey keeps heading off to war where he gets entangled with angry senoras and senoritas or is being slashed with French swords or shot with French firearms. During her second season, Rowanne decides to practice kissing any man she spends time with which leads her aunt to chasten her about her reputation. I was concerned too. But Rowanne seems to suffer little consequences just as Carey escapes angry Spanish women and festering wounds. Well, okay.

After years of them being apart (not that they were promised or anything but still …), finally Carey arrives home to stay. Between his relations and Rowanne’s relations I wanted to smack the lot of them. I guess Carey’s madcap, unconcerned sister is supposed to be amusing but I found her merely annoying and Carey’s patience with her astounding. Emonda the step-aunt is worse than useless most of the time as she dissolves into tears and hysterics at the drop of a hat. This does contrast with Rowanne’s levelheadedness.

There is a subplot that winds up the whole book that I also found distasteful. Plus titles are mixed up and more than once Carey as well as other people appeared to think that a bastard could be named as his heir. No, I think not. I liked Carey and Rowanne and was glad to finally see them together as they’re well matched but the rest of the relations could go jump in a lake. C-