REVIEW: The Lady Risks All by Stephanie Laurens

Your latest book, The Lady Risks All, is almost 500 pages. That was at least 350 too many for me.

In many ways, this is a typical Laurens book—although it differs in one excellent way. The man has enough sexual experience to train several brothels; the virginal heroine is so responsive to his touch it’s a wonder she can hold hands without sexually exploding. There is a large family with enough wealth to rescue at least part of the Greek economy. The language, especially that of the love scenes, is intricate and studded with fragments. The sex scenes go on forever. 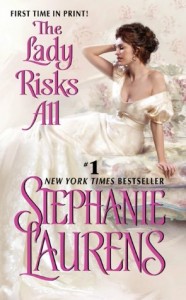 In some Laurens books, this combination works. I regard Devil’s Bride and A Secret Love with nostalgic fondness: they were two of the books I read when I returned to reading romance five years ago. In The Lady Risks All, however, none of these pieces is done especially well and, the novel, the very long, overwritten novel, is a chore to read.

As the book begins, a young lord with a gift for gambling discovers his older brother has ruined the family holdings. Poverty beckons for the Delbraiths unless a solution can be found. Julian Delbraith sacrifices his life to save his family: he leaves society, uses his gambling skills to become the owner of many of London’s most successful hells, and funnels his family money to restore them to their place of fabulous wealth. He takes the name Neville Roscoe and believes he is forever forbidden to publicly be a Delbraith and a member of the ton.

Roscoe, as he is called, is one of those figures found only in fiction: a gangster who’s really a good guy. He’s such a good guy, in fact, that for fun, he runs a group—the rest are of the ton—that funds local charities. One of the gentlemen in this group is young Roderick Clifford (the only one not of the nobility, but he’s got a fortune) who lives a few doors down from Roscoe’s palatial home. Roderick shares his home with two very repressive aunts for whom propriety is everything and his elder sister, Miranda.

Lady Miranda is twenty-nine and has almost no life. Her aunts, terrified she’ll repeat the mistakes her mother made, have kept Miranda on a very short leash. She has an utterly uninspiring suitor, a fear Roderick will do something stupid, and very little to occupy her time. One night, Miranda sees Roderick slip out of their house late at night and walk into Roscoe’s. Miranda is sure he’s up to no good and follows him. She sneaks into the house and rather than finding her errant sibling, encounters Roscoe. After showing her what her brother is really up to—overseeing a small bailiff-run school in Battersea—Roscoe walks her home. They are, of course, wildly attracted to each other but given Miranda’s unyielding propensity for respectability and Roscoe’s notorious reputation, both walk away.

Miranda plans never to lay eyes on Roscoe again until Roderick goes seriously missing.  The aunts refuse to allow Miranda to go to the authorities—imagine the scandal!—so Miranda heads back to Roscoe’s home and asks him for his help in finding her brother. Surprising me, if not Miranda, Roscoe immediately says yes and sends his henchmen out to cull the streets for news.

Miranda and Roscoe then spend days searching for Roderick all over England and, as they spend time together, they oh so slowly fall in passionate love. And I do mean slowly. They share their first kiss on page 141 and finally make it into bed on page 180. It’s par for the course in this book that their first night of passion takes seven pages to describe, each filled with paragraphs like these:

The sensation of him within her, hard and heavy, so alien, so male, at her core, was so much more than she’d imagined. So much more intense, more intimate.

Gasping, desperately panting, her wits flown, her senses rioting, she held him, moved with him, and quickly learned the knack, found the rhythm. Slick and hot, he filled her, and she urged him on, receiving and glorying in each powerful thrust, in every scintillating sensation.

When he lowered his head and nudged, she tipped up her face and let him kiss her, let him claim her mouth as together they whirled.

Into a conflagration of need, of greedy, raking passion.

Into a furnace where desire flared, rapacious and hungry, and filled them. Drove them.

Into a whirlpool of searing sensation that swept them up, up, until she shattered on a peak of coruscating pleasure, of ecstasy so sharp it seared her soul.

Once Miranda and Roscoe discover carnal joy, they engage in it as often as they can. This novel has pages and pages of bursting, soaring, whirling, cataclysmic passion that always leaves the two wracked on some blissful paradisiacal shore. When they aren’t in bed, they search for Roderick. These two activities go on for hundreds of pages. Rarely has attempted murder and constant seduction struck me as soporific, but in A Lady Risks All, I found it dangerous to read after ten at night.

I couldn’t get into this book. Furthermore, although this is not my area of expertise—I usually don’t think I know enough about English history to judge a book mistorical—it seems unbelievable to me that Miranda could traipse across the British Isle with a man she’s neither related or married to and not have everyone around her have a conniption.

The most interesting issue in the book—whether the hero remains as Roscoe which means his social status is beneath Miranda’s or whether he embraces his birthright in which case she’s now beneath him—is explored in such depth that it loses its impact. The reader knows there will be a happy ending—this is both a romance and a Stephanie Laurens book—and it’s frustrating to drudge through so many unnecessary pages to get there.

So, no, I didn’t like this book. That said, there is one aspect of it I thought pretty damn great. It has a heroine who becomes completely in charge of her choices, her sexuality, and her life outcomes. This sort of woman is so different that Ms. Laurens’s usual heroine, especially those of her famed Cynster set. Miranda is self-reliant—once she escapes her despotic aunts—she’s essentially a modern heroine. She decides when to make love, when to ask for help, and what sort of future she wants. This makes the novel temporally implausible, yes, but it’s nice to see Ms. Laurens leave behind the easily molded heroines of her past works. I particularly liked that while Miranda totally digs sleeping with the amorously exceptional Roscoe, the great sex she’s getting doesn’t sway her decisions.

I’ve read many of Ms. Laurens’s books—there’s something about her love stories I’ve often found alluring even when her prose has made me roll my eyes. But this book and the one I read before reading it–The Capture of the Earl of Glencrae–were such slogs I’m not sure I’ll try another. Instead, when I’m jonesing for whatever it is in Ms. Laurens’s books I like, I’ll pick up Devil’s Bride and watch Devil work his alpha magic on Honoria. As for The Lady Risks All, I don’t recommend it, not even for die-hard Laurens lovers. I give it a C-.