REVIEW: The Kingdom by Amanda Stevens

I enjoyed your previous novel, The Restorer, about the self-styled Graveyard Queen, Amelia Gray. It’s a morbid name but a fitting one. Amelia is a cemetery restorer, as well as the owner of a niche, but popular, blog. What few people know, however, is that she can also see ghosts. Because I liked reading about this character with such opposing traits, I was looking forward to picking up the rest of the trilogy. But having finished the follow-up, The Kingdom, I can’t help but wonder if I got on the wrong bus. 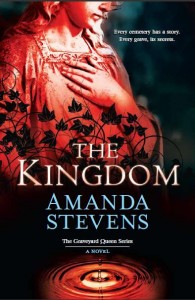 Set after the events of The Restorer, Amelia leaves Charleston and travels to Asher Falls, South Carolina where she’s been commissioned to restore a cemetery. She appreciates the work. Anything to put space between her and Devlin, the man who encouraged her to break the rules that’s kept her safe from the supernatural her entire life.

But once she arrives in Asher Falls, she senses things are not right. It’s not just that there’s a sunken graveyard at the bottom of the lake — though not the one she was hired to restore, thankfully. The town of Asher Falls is in decline. It’s obviously seen better days. The people who live there are secretive, more so than you’d expect in a small town environment. A lingering ghost that Amelia does her best to ignore keeps telling her to leave. It’s never a good sign when a ghost is telling you to get out of town. The longer Amelia stays, the more she begins to wonder if she was brought there for a purpose other than restoring a cemetery.

Initially, The Kingdom had many of the elements I enjoyed in The Restorer. Its opening pages were atmospheric and creepy. A graveyard at the bottom of a lake that you have to cross via ferry to reach town? With ghostly faces looking back up at you? Brr. From the beginning, we immediately wonder if choosing this as the place to seek refuge from Devlin is a good idea.

This continues as she begins to meet the town’s denizens. Most of them are a little strange. They all obviously have things they’d rather not share with the outsider. The book is strongest when Amelia is trying to get a feel for her surroundings: the place, the people, the cemetery and, of course, the ghosts.

Where the book falls apart is when we get to the actual story. The more Amelia learns about Asher Falls and the true reason for why she was brought there, the less it made sense for her to stay. And yet stay she did. I know some readers thought Amelia made some foolish, even TSTL choices in The Restorer. While I saw where they were coming from, I didn’t have these same complaints. With The Kingdom, however, I do. At multiple points throughout the book, I seriously wondered why Amelia stayed and why she made the choices she did. The degree to which she relied on intuition and “feelings” struck me as inconsistent with her character, let alone the severity of the situation around her. Someone broke into her house, stole and drugged her recently adopted dog, and then set bear traps for her when she went to retrieve the poor thing. Something is clearly not right with this town.

Maybe her motivations just didn’t seem clear to me. The argument that she had to stay in town to finish the cemetery restoration breaks down quickly because while that is the reason she came, it’s certainly not the focus of her attention. Even when she’s doing tasks related to the restoration, her mind is always elsewhere. Most of the time, she seemed to be doing other things — especially after she discovers the hidden, solitary grave.

Amelia also finds a new love interest in the form of Thane Asher, the heir to the powerful family after whom the town is named. I couldn’t have cared less. It’s difficult to buy into a romantic subplot when as a reader, I was well aware of the reason Amelia came to Asher Falls in the first place: Devlin. She’s still torn up about him and admits she’s not ready for a new relationship. I couldn’t see how a relationship between Amelia and Thane would end anywhere good and as a result, failed to become invested in the outcome.

In the second half of the novel, we learn more about the reasons for Amelia being hired and how they tie into her background. My thoughts can be summed up in one word: Really? It was at this point in the novel that my suspension of disbelief snapped. I don’t want to go into detailed spoilers but let’s just say I found the reasons rather contrived and ridiculous. Yes, the Graveyard Queen books revolve around a woman who can see and interact with ghosts. But to then introduce [spoiler]witches, demons, and pacts with the devil[/spoiler] with no build-up was asking a bit too much.

As a fantasy reader, I can accept all sorts of developments but only if those things are in line with the world being built up until that point. I was introduced to a certain type of world in The Restorer and for the first part of The Kingdom. In the latter parts of the novel, however, I felt like I’d suddenly dropped into another book, telling a different story. It did not read as consistent to me at all.

In short, consistency was the main problem for me with The Kingdom. It wasn’t just the worldbuilding; it was Amelia. After the events of The Restorer, she wanted to go back to following the rules because breaking them had given such disastrous results. What happens instead? She breaks them again, and the repercussions are even more severe.

I thought The Kingdom was a weak installment to this trilogy. While it cleared up some mysteries about Amelia’s background, there were serious flaws in the plot. The entire story was really just a convenient vehicle to tell us the source of Amelia’s powers. Maybe I would have felt differently had I found the Asher family sufficiently ominous and dangerous. Instead they reminded me more of a bunch of inbred alcoholics who don’t get out much. I probably will read the next Graveyard Queen book in the hopes that we’ll get back on track from this awful detour, but I’m not as enamored as I once was. C-