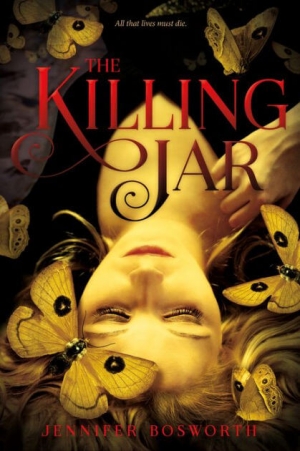 While I’m not as deeply into YA paranormals as I used to be, I do still dip my toe into the subgenre every now and again. The description of your novel, The Killing Jar, was pretty vague on the specific details but also intriguing enough to catch my interest. What can I say? Sometimes I’m weak for the “girl has mysterious powers she doesn’t understand” trope!

And what a mysterious power it is. Our heroine, Kenna, can literally kill people by sucking the life force from them. Clearly, that’s not normal. But what I found even less normal was how her mother handled the entire situation. Kenna’s mother telling her to never use her powers again? Normal. After all, you don’t want your child going around draining people’s life forces from them and then getting drunk off the power. What’s not so normal? Proceeding to carry on with your lives as if this incident doesn’t have a major impact on everyone: Kenna, her family, and the family of the boy she accidentally killed. It gets even more tenuous when we learn the mother’s backstory later in the novel. It struck me as the mother withholding information from her daughter for the sake of withholding information; that is to say: the novel’s plot wouldn’t exist otherwise.

I’m all for parents making bad decisions. They’re human, and humans are imperfect. But this specific decision on the part of the mother seemed stupid, because it put everyone in danger—especially Kenna. Why wait until Kenna was older to bring her to the place where people can help her with her powers? Simple. Because if her mother had brought her to Eclipse when Kenna had first killed the boy, she’d be too young to be the protagonist of a YA novel.

Moments like this are scattered throughout The Killing Jar. Some parts are deliciously creepy while some parts don’t make complete sense. Case in point: The father of the boy Kenna killed goes mad with grief. Perfectly believable. Grief can affect people in extreme ways. But he also immediately blames Kenna for it and claims that she’s a vampire that sucked the life from her son. While that is what happened, I never quite understood why he reached that conclusion. Who accuses a little girl of being a psychic vampire? That’s weird.

Eclipse, the home of other energy vampires like Kenna, is a bit of an odd place. It’s very much like a hippie commune where taking in life energy is sort of like going on a drug trip. It felt very retro in that sense, like I’d taken a step back into the 1970s. Unfortunately, this hippie-style commune had its downsides – namely, the uncomfortable cultural appropriation that comes with the modern-day boho hippie movement. White girls with dreads, dreamcatchers…pretty much everything you expect. Even the goddess worshipped by Eclipse ventures into this territory. Kalyptra, named for the real-life bloodsucking vampire moth calyptra, is supposedly associated with Native Americans and brujas. Fine, I’m willing to go along with this – except the people living in the commune aren’t predominantly Latino or Native American. In fact, I’m not sure more than one or two people were. So why is this hippie commune of majority white people worshipping a Native American moth god? Because it’s cool? Because it’s exotic? Come on now, it’s 2016. Are we not past this yet?

In many ways, this is less a YA paranormal and more an old school horror movie. You know, the one where a teenage girl gets immense power and a hot guy but a terrible price? The one where she discovers she can live forever but only if she joins a cult that worships an evil god and becomes a murderer? The Killing Jar is that book. And if you’ve watched those movies, you pretty much know how it goes.

The Killing Jar is immensely readable, which is why I finished it. But the unnecessary withholding of information and logic gaps, as well as the hinky worldbuilding, are big black marks against it. The casual queerness of Kenna’s mother was welcome, if a bit underdeveloped. The love triangle subplot never went as far as it needed to. If anything, I wish the various relationship dynamics had been explored more deeply. That would have made the book more memorable. C-