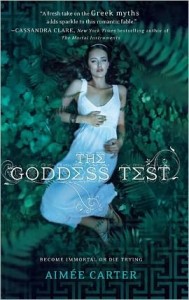 Kate Winters has left the familar sights of New York to accompany her mother to her hometown. Kate’s mother is dying of cancer. Her prognosis isn’t good and in fact, she’s already far outlived any life expectancy estimates. So even though it means moving to a strange town for her senior year, Kate does it because she isn’t ready to say goodbye. Her mother is the most important person in the world to her, and Kate will do anything to extend their time together as much as possible.

Kate’s arrival in her mother’s hometown is rocky. She immediately draws the ire of the resident mean girl cheerleader. But when a cruel prank goes fatally awry, Kate meets a mysterious young man named Henry who saves her classmate’s life. Of course, he does so in exchange for a promise: Kate must read the story of Hades and Persephone, which in turn will tell her what he wants her to do. Never mind the minor detail that people usually can’t bring the dead back to life and that if they can, something is probably very wrong with the situation.

So when Kate refreshes herself on the myth, she realizes the truth: for the rest of her life, she’s to spend half of the year living with Henry. Kate is horrified at the idea and refuses — to tragic results. So she re-negotiates with him to reverse what happens and she will do what he wants. And in exchange, he will allow Kate to spend as much time with her mother as she needs, until she is able to say goodbye. But when she moves into the mansion, she realizes the truth. You see, Henry is a god and the only way for him to retain his position is to take a bride. Many girls have come before Kate, and all of them have failed. Kate is the last candidate before time runs out and if she fails, then Henry will give up his position to another.

To determine her worthiness, Kate has to pass several tests. The problem is that she doesn’t actually know what any of the tests are and no one will tell her. Not one to control her fate here, is she? Because how can you prepare for a test if you don’t know how you’re being tested and what you’re being tested for.

In fact, Kate spends most of the book in a perpetual state of cluelessness and ignorance. It makes a very quick read but also a frustrating one. I felt like we were being led through the story but not allowed to experience it. Kate sails through the tests successfully, but does it matter? We don’t know what they were nor do we know what attributes and traits they tested. Does Kate experience any actual setbacks? Not particularly. There are interpersonal conflicts but they were handled so superficially so as to strip any and all excitement from the story. This would be my biggest complaint about The Goddess Test. The plot proceeds on such an even keel, missing the highs and lows that make a story engaging and memorable. Overall, I personally found the book superficial and slight. In most aspects, it lacked depth — the relationships with her classmates, the other people in the house and even Henry. I just couldn’t find it in myself to care.

The one aspect that I did like, however, was Kate’s relationship with her mother. Kate has given up a lot to take care of her dying mother. There is no resentment or whining about not being able to have a “normal” teenage life. For all long as Kate can remember, all she’s ever had is her mother. Kate’s father has never been in the picture and she doesn’t care. She loves her mother, so much so that she dropped everything to accompany her halfway across the country. There’s a quiet beauty in the way Kate learns to accept her mother’s fate and works towards letting go. The way the narrative handled the grieving and mourning process really spoke to me.

On the other hand, that goodwill was completely outbalanced by the shaky handling of the mythology. And by shaky, I mean not present or intrinsic in any way. It takes a little bit more than giving a character the name of a god, incognito or not, to make it so. Why base the story on Greek mythology if there was never any intention to adhere to the rules and customs? For example, you know how the Greek gods were mostly all related to each other in some way? Don’t worry. The Goddess Test tells us that stuff was just a lie so we don’t need to worry about that icky incest stuff. Not that I’m into incest, but that was a very big aspect defining the various relationships the Greek gods had with another.

I also didn’t care for the mixing of cosmologies either. Why in the world would the Greek gods, of all things, care about [spoiler effect=”blind”]the Seven Deadly Sins and use that upon which to base their goddess test[/spoiler]? It was such a head-scratching moment in the book for me.

I understand there’s always leeway for interpretation and subversion. I usually like that sort of thing. But this goes so far astray from the source that I honestly wonder what the point was. To have a convenient gimmick to draw people in? That just makes readers like me resentful.

While very readable, The Goddess Test ended up veering into trainwreck territory. The heroine faced no real obstacles. The mythological basis was shoddy. I love Hades and Persephone retellings, but I should have passed on this one. C-