REVIEW: The Girl from the Well by Rin Chupeco 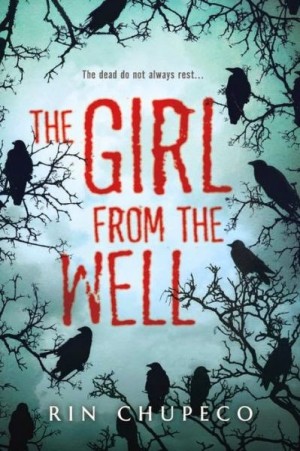 Maybe because fall is fast approaching (where did the year go?), I find myself in the mood for a horror novel. Something like Anna Dressed in Blood or The Waking Dark. When I saw your debut, The Girl from the Well, I was excited. Horror influenced by J-horror movies? Sign me up! Alas, I think being such a huge J-horror fan ended me working against me here.

Okiku is the titular girl from the well. She’s a vengeful ghost who travels the world, bringing justice to slain children by killing their murderers. But one day she finds herself drawn to a half-Japanese (living) boy named Tarquin who has mysterious tattoos on his body.

The tattoos are actually seals binding a very dangerous spirit, and they’ve started to break. But because Tark is still a child, his well-being actually falls under Okiku’s purview. (She brings justice to wronged children, remember?) So now she, along with his cousin Callie, must find a way to save him before the other spirit destroys him.

The book opens with a fantastically creepy and violent scene in which we see Okiku delivering justice. It was very reminiscent of a horror movie, and I loved that. But maybe this raised my expectations to an unrealistic degree. Instead of focusing on Okiku and her afterlife of vengeance-seeking, the book detours into revolving around Tark. And while he’s nice and all, the book is called The Girl from the Well, not The Tattooed Boy with a Masked Demon Bound to His Soul.

I’d be remiss if I didn’t comment on the writing style. I didn’t mind it, but it is a bit more experimental than you normally find in YA. It’s kind of like a House of Leaves-lite. Nothing as remotely rigorious as that novel, but there are stylistic tricks that some readers will find annoying.

While I don’t often consider characterization as important in a horror novel as I would in other genres (like contemporary, for example), it was lacking here to a distracting degree. Tark is the weird boy with the weird tattoos whose mother is crazy (more on that later). Callie is the Concerned Cousin who drops everything and travels halfway around the world to help him even though I didn’t believe their relationship was so close that she’d do this in the first place. Okiku was the most interesting character, in my opinion, and the novel wasn’t actually her story! (To my regret.)

So back to Tark’s mother. Yes, she’s the crazy mother archetype, because YA needs more of these figures, I guess. But it doesn’t last long because you’ve watched enough horror movies, or read enough fiction in general, we know what happens to mothers of angsty boys, don’t we? I just wasn’t thrilled by any aspect of this subplot: the execution, the portrayal of mental illness (even if it was supernaturally induced), what ultimately happened to her, etc.

My main difficulty with this book, however, stems from the fact that I am such a big Japanese horror fan. By this I mean that I can tell where all the influences come from. The girl from the well — it’s hard not to think of Ringu (aka The Ring). A lot of Okiku’s portrayal reminded me of Ju-On (aka The Grudge). Yes, both of these movies tap into the onryo figure but it goes beyond that. Female ghosts in white with long black hair who hang upside from the ceiling? That’s a visual straight out of Ju-On. The rituals surrounding Tark? Reminded me of Noroi. I can’t believe this worked against me here because that’s never happened to me with horror, but it did.

Despite a promising beginning, The Girl From the Well didn’t live up to its stunning first scene. It’s a fast read but I think ultimately readers will be left unsatisfied. C-